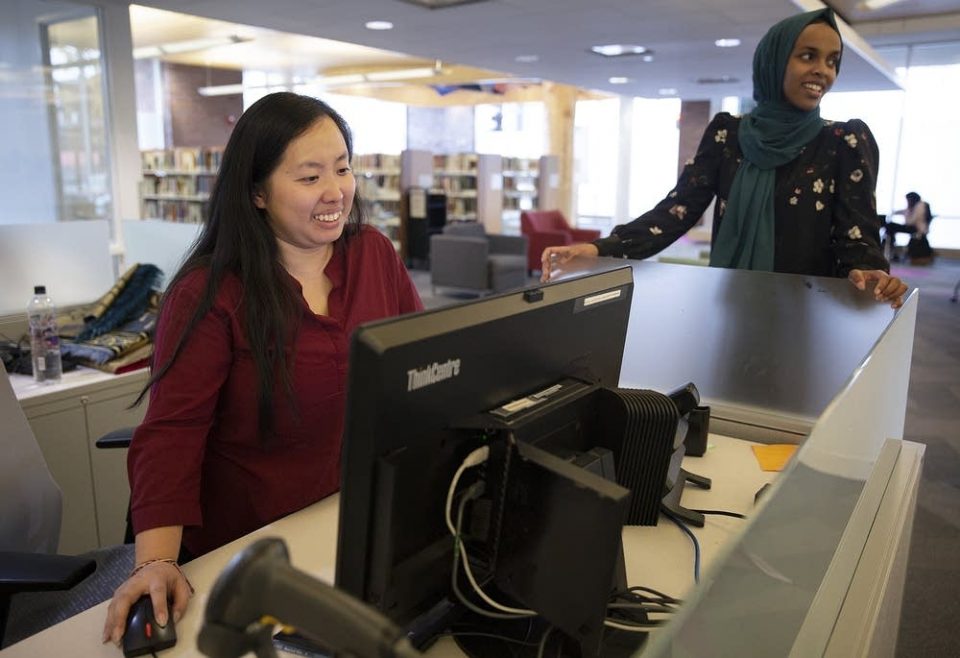 Among the many ways in which libraries are different these days, here’s one: They’re not very quiet.

For example, Rondo library, just off Dale Street in St. Paul, is a busy place on a weeknight. Kids run around; meeting rooms are full of people taking ESL classes or getting homework help. Patrons browse rows of books, DVDs and vinyl, and others use the computers to play games, research or get work done.

“Yeah, this is such a fun library,” said Pang Yang, a community services coordinator with the St. Paul Public Library system.

“Libraries have transformed quite a bit from what they were, even in the early 2000s. A lot of people thinks it’s books and stuff. Really, to me, it’s community and information,” Yang said. “That’s what libraries are … the community decides what it is. Even though we work here, it’s really the community that comes and decides what it’s going to be.”

Minnesota libraries own more than 15 million items for patrons to borrow. And those items aren’t just books or DVDs. Some locations rent out fishing poles, tools, toys and bundt pans. There’s even a seed library you can use to start a garden. They provide thousands of internet devices for public use. And they sponsor tens of thousands of programs such as job training, ESL classes, book clubs, STEM programs and story times in multiple languages. There are even a few libraries in laundromats.

John New said he visits the Rondo library about four times a week. “I primarily get movies,” he said. “I use the internet once in a while, but mostly movies.”

Navat Mohammed, studying health care at Century College, said she likes doing her homework at the Rondo library — especially because she doesn’t have to leave to pray in the middle of study sessions. “It’s more comfortable than another place,” she said. “We use that corner to pray.”

The job of Minnesota’s library employees is much broader than cataloging and taking care of books. Yang and her coworkers field a lot of unexpected questions.

Like the time a woman walked in with a turtle she’d found on the street, washed it off in the drinking fountain and asked for reptile care tips.

Other people come in to ask for help with cell phone paperwork or language translation.

Some of the questions Yang gets are harder than others:

“We get a lot of very heartbreaking questions too … like, ‘Oh, I think so-and-so is getting deported. How can you help me? I need help.’ We also get questions like, ‘My sisters are really hungry. How do I get food?’”

Yang has started giving her phone number out to people who seem like they really need it — especially if English isn’t their first language. It means she sometimes gets calls in the middle of the night from people experiencing trauma, or from people who’ve just gotten in a car accident and don’t know what to do.

But she thinks of that as part of her job. She can still remember when her family, who were immigrants themselves, experienced food insecurity.

“When you know that someone else has experienced the same trauma, how do you leave them behind? And really what ends up happening is that I share the information with one person, and they go off and they share that information with someone else,” she said. “That help permeates the community. That’s why I think this work is so impactful.”

“Here we are at Rondo library. We are the social infrastructure for University Avenue. People come in here for reasons that — I can’t even think of all of them. And so they just come in and say, ‘Somebody told me, just go to the library, they’ll help you.’”

Rondo library staff are experimenting with a black culture and history collection, a weeknight teen mentor program, a sewing class and a small business certification class.

Yang and Ryan hope this all contributes to making their library a place that’s welcoming, that allows people in their neighborhood to pursue their interests and connect with their community.