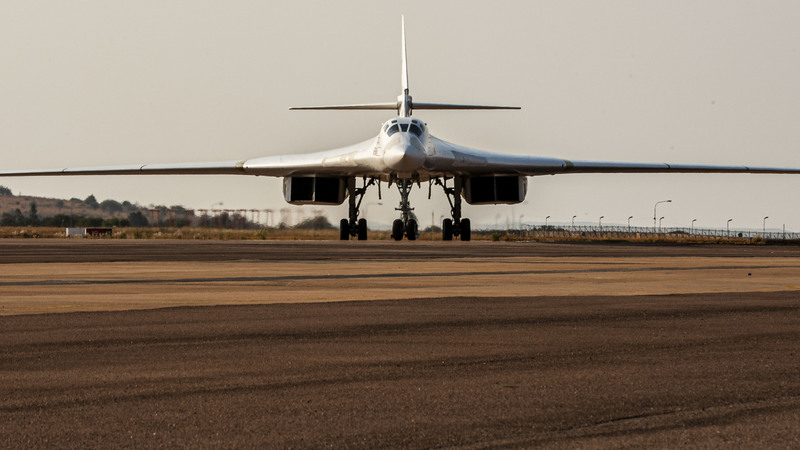 ‘Do you believe in coincidences?”

The Russian embassy’s press attaché, Alexander Kulyaev, is on the apron of Waterkloof Air Force Base. He is a busy man this week: not only is his president entertaining 43 African heads of state and government at the inaugural Russia-Africa summit, but two nuclear-capable supersonic bombers belonging to the Russian Air Force have just landed in Pretoria.

This is the aircraft’s first ever landing on the African continent and, according to an embassy official, only the second country in which it has made a public appearance outside of Russia. The first was Venezuela, which has received three visits from Tu-160s, most recently in 2018 as a show of support for the under-fire government of President Nicolás Maduro.

It is unclear whether the same message is intended for the administration of President Cyril Ramaphosa, who is in Russia for the summit.
Both Russian and South African officials deny any ulterior motives, maintaining that this is strictly a military exercise.

“The timing is just a coincidence. And honestly, one I could have done without,” Kulyaev jokes.

Coincidence or not, the bombers’ high-profile visit comes during a week in which Russia-Africa relations are under scrutiny like never before.

In the Black Sea resort of Sochi, Vladimir Putin is making an audacious play for influence on the continent by portraying Russia as an enlightened partner for Africa — along with generous loans and arms deals (such as the 12 combat helicopters sold to Nigeria this week).

As Putin said in an interview with state-run news service Tass, Africa is attracting interest from every major power. “Indeed, interest in developing the relations with African countries is currently visible not only on the part of Western Europe, the US and [China], but also on the part of India, Turkey, the Gulf states, Japan, the Republic of Korea, Israel and Brazil.

“This is not accidental, as Africa increasingly becomes a continent of opportunities.”

These opportunities include natural resources, infrastructure development and increasing consumer demand from a growing population, Putin specified. But, he said, Russia was going to be a different kind of superpower, one that does not engage in “pressure, intimidation and blackmail” to “exploit” sovereign African governments. “Our African agenda is positive and future-oriented. We do not ally with someone against someone else; and we strongly oppose any geopolitical games involving Africa.”

This fine rhetoric is difficult to square with Russia’s recent track record on the continent. In the last 18 months alone, Russian mercenaries — run by the Wagner Group, a shadowy military contractor led by a businessman with close links to Putin — tried and failed to prop up the regime of former Sudanese president Omar al-Bashir; Russian political strategists tried and failed to influence the result of the presidential election in Madagascar; and a consignment of Russian military hardware was delivered to Mozambique, amid persistent reports that Russian mercenaries have been deployed there too.

Nowhere is the gap between Russia’s rhetoric and its actions greater than in the Central African Republic (CAR), where Russia began its new scramble for Africa several years ago.

In July this year, a three-minute animated video appeared on YouTube. Called Lionbear, the cartoon was aimed at children and told the story of a brave but beleaguered Central African lion, who was fighting a losing battle against a pack of hungry hyenas.

Luckily the lion had a friend who came to the rescue — the strong Russian bear. The bear fights off the hyenas, brings peace to the land and everyone lives happily ever after.

The video was produced by Lobaye Invest, a Russian mining company with links to the Wagner Group. Lobaye runs a radio station in the CAR, and organised a Miss CAR pageant.

But, as a CNN investigation reported this year, Lobaye also funds the 250 Russian mercenaries who are stationed in the country. “The dividend for Lobaye Invest: generous concessions to explore for diamonds and gold in a country rich in mineral wealth,” it reported.

The Russian mercenaries are officially there to train the CAR’s national army. But their activities in the country are shrouded in secrecy, and when three Russian journalists travelled there to investigate they were murdered. If this is Putin’s definition of “positive and future-oriented”, then African countries have cause for concern.

Not that any of this is unique to Russia. Perhaps Putin should not try so hard to distance itself from his global rivals — in Africa, at least, they all seem to have plenty in common. The United States, for example, operates a string of top-secret military bases across the continent; China buys off leaders with enormous, unsustainable loans and flashy infrastructure deals; and France is no stranger to morally dubious arms deals (a French company, Thales, played a starring role in the multibillion-rand arms scandal in South Africa, for which former president Jacob Zuma is facing criminal charges).

So far, there is little evidence to suggest that Russia is any better — or significantly worse — than any of the other superpowers scrambling to take advantage of Africa’s resources and markets. What is clear, however, is that Russia’s soft power play in Africa comes with hard edges — and none harder than the two Tu-160s currently parked at Waterkloof.