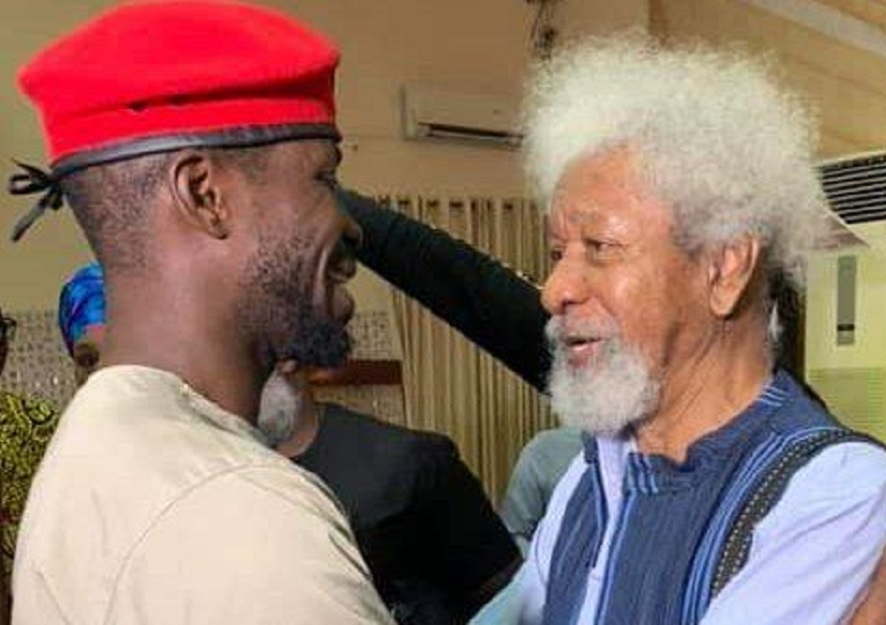 In an interview with Quartz, the Nigerian writer said the musician-turned-politician “for me right now, represents the face of democracy for Uganda”. Soyinka added that in Wine, Uganda’s possess the best possible visionary to take over the reins of government.

“Even before [we met], I’d taken an interest in his movement, his candidature, and his passion. And I share it; I share every bit of it,” said Woyinka who spent a while with the Ugandan presidential candidate in 2019 in Lagos during #FelaDebate, a symposium in memory of legendary Afrobeats founder Fela Kuti.

In 2018, along with a group of celebrities, media personalities and authors including Angelique Kidjo, and Femi Kuti, Soyinka signed a statement condemning the arrest, imprisonment and attack on Bobi Wine.

Much like Wine, Soyinka has made his own history with fighting brutal and dictatorial governments in Nigeria. He was arrested for illegally visiting the secessionist territory Biafra in 1967.  He had met with the secessionist leader, military governor Chukwuemeka Odumegwu Ojukwu in Enugu in 1966, and was forced to go into hiding as he was labelled a spy during the civil strife between the Nigerian government and Biafra.

Soyinka was also an outspoken critic of Sani Abacha, Nigeria’s military ruler between 1993 and 1998. It was in opposition to Abacha that Soyinka first met Museveni.

He said in the interview: “I met Museveni during the fight against Sani Abacha. At the time we met it was still possible to consider him a democratic leader. Today he’s joined the gang—the enemies of society”.

The African to win the Nobel Prize for Literature in 1986 believes the times of Museveni, as well as many others like him, have come to an end. It is his fervent hope that Ugandans share his faith in Wine.