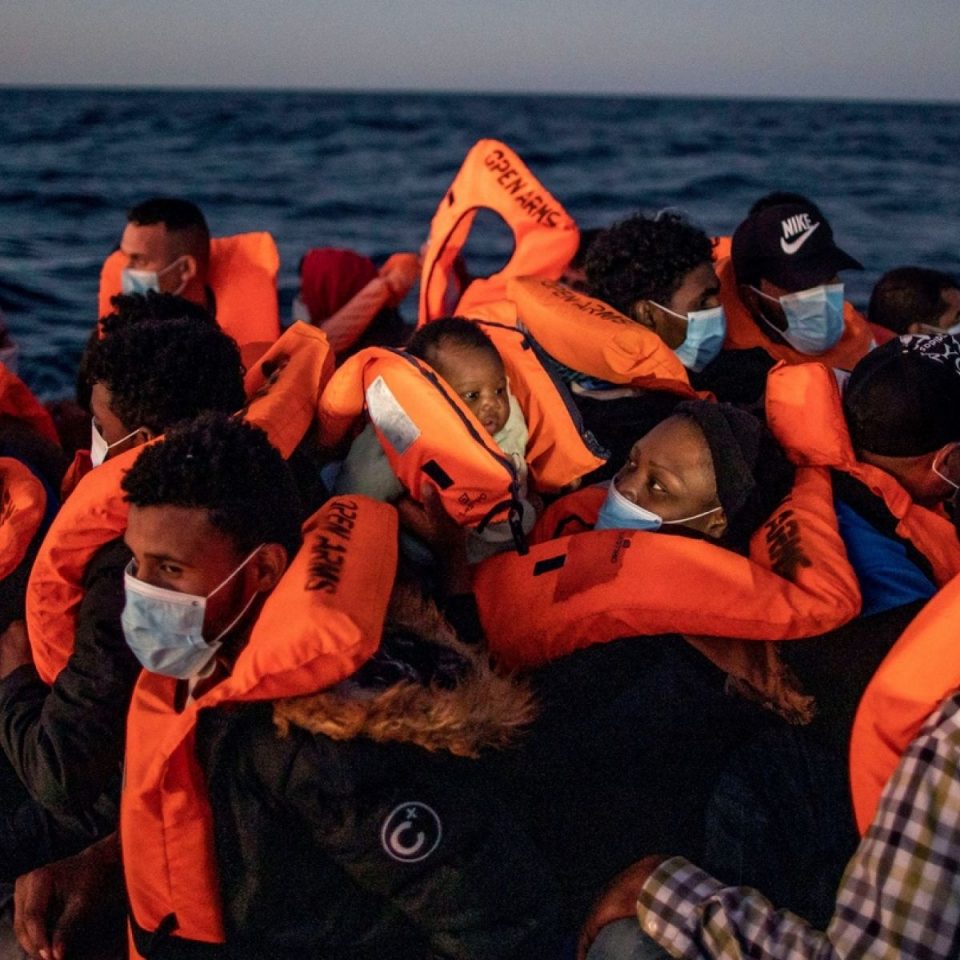 A woman holds a three-month-old baby as migrants and refugees from different African nationalities wait for assistance on an overcrowded rubber boat in the Mediterranean Sea. File Photograph: AP/Bruno Thevenin

In October 2013 a ship carrying hundreds of asylum seekers from Eritrea, Ethiopia and Sudan sank off the coast of Lampedusa, Italy. More than 300 women, men and children drowned, many of them survivors of armed conflict and political repression in their countries of origin.

Italian divers recovered bodies from the hold of the ship, tying them together by rope as they brought them up to the surface. One of the last found was of a 20-year-old Eritrean woman who was seven months pregnant. She had given birth as the ship sank – her child, still attached by his umbilical cord, was found beneath her clothes.

Since that tragedy in October 2013, tens of thousands more of those fleeing wars, conflicts, persecution, poverty and, increasingly, the impacts of climate change, have died at sea. Some deaths have catalysed public grief – such as the images in 2015 of Syrian-Kurdish toddler Alan Kurdi – and many have become almost normalised in a context in which the death toll is ongoing.

The reality of EU migration policies is quietly enabling this invisible death, at sea and on land.

The mental health impact of the journeys, as well as the dire humanitarian conditions in European refugee camps, exacerbate the trauma experienced by asylum seekers

Two summers ago I sat in Lampedusa with survivors of another journey. Those with us had just disembarked an NGO search and rescue ship, the Open Arms, after three weeks anchored at sea, during which they were prevented from disembarkation by mainland authorities.

Hawa, an Eritrean seamstress raised in Sudanese refugee camps, spoke of sexual violence, beatings, hunger and daily humiliation in Libyan detention centres. Others in the group echoed her experiences.

Their descriptions are ones that I’ve heard repeatedly since 2013, in camps on Lesvos island, in the north of Greece, Calais, the Balkans and in Italy. During those years I’ve worked alongside brave, tenacious, creative and deeply capable survivors – from Syria, Sudan, Iraq, Congo, Palestine, Eritrea, Ethiopia, Afghanistan, Kurdistan and elsewhere.

The barriers constructed in the EU, both policy-based and through new physical, militarised borders on land and at sea, are preventing people from safely reaching territory where they can seek asylum and claim international protection.

Documented human rights violations, including violent push-backs by border and security forces in EU member states, particularly in the Balkans and Aegean, continue. And those who try to respond – with solidarity and welcome – increasingly find their work criminalised.

The mental health impact of the journeys, as well as the dire humanitarian conditions in European refugee camps, exacerbate the trauma experienced by asylum seekers in countries of origin.

One survivor I met pre-Covid on Lesvos in Greece was Nadia*, a Yazidi survivor, parent and social care worker from Sinjar in Iraq. In 2014 Islamic State launched a genocidal attack on her community during which 23 members of her family were killed – her three eldest brothers were executed in front of them. Her younger sister, a student and wheelchair-user, was abducted and never found. Nadia was kidnapped and assaulted over months until she escaped.

The lives, and futures, of Hala, Hawa, Nadia and so many other people on the move, matter. Their hopes matter, their tenacity, courage and kindness matter

Nadia had acute PTSD symptoms but trauma was no longer considered amongst vulnerability criteria in her asylum claim. We sat in her prefabricated shelter, shared with two other families, as we pored through her salvaged, tattered documents, trying to amass the endless documentation that might allow her family to continue their journey to Germany.

Nadia and her family eventually completed that journey on their own but more than 120,000 other refugees and asylum seekers remain in limbo in Greece. We remain in contact as she begins to tentatively find her way in a new country.

My WhatsApp messages contain an ongoing archive of those who continue the journey.

Hala, a Syrian engineer, video calls as she sleeps in forests in the Balkans with her 6-year-old son, husband, her father and teenage sister. Her family is scattered across borders – her mother and sister stuck in Greece, brothers in Germany, other relatives in Syria and Lebanon.

We gather monthly funds and legal contacts from friends and colleagues in Dublin and send them to her and other families, feeling our inadequacy.

The lives, and futures, of Hala, Hawa, Nadia and so many other people on the move, matter. Their hopes matter, their tenacity, courage and kindness matter.

With the lack of a justice-based, responsibility-assuming and humane response on an EU-wide level, the rights of those seeking refuge in Europe will continue to be undermined.

And in the absence of safe passage more women, men and children will continue to die preventable deaths in the Mediterranean Sea – tonight, tomorrow and in the weeks and months to come.