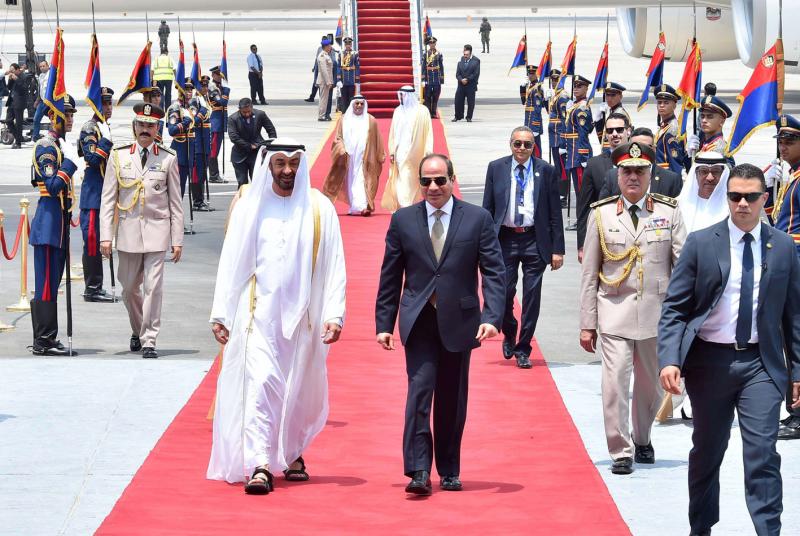 The Gulf states’ reconciliation with Qatar and Israel’s cooperation with the UAE are the latest blows damaging Egyptian President Sissi’s prestige, just as a new U.S. president takes over

Egyptian President Abdel-Fattah al-Sissi said he wouldn’t attend the summit of Gulf Arab leaders in Saudi Arabia this week marking the end of the regional dispute with Qatar. He sent Foreign Minister Sameh Shoukry, who lauded the agreement with faint praise.

Sissi wasn’t pleased with some of the accord’s clauses, which he sees as exaggerated concessions to Qatar and something even harmful to Egypt’s interests. The Egyptian media reported that Sissi was especially incensed by the dropping of the demand to shut down Al Jazeera and the revoking of the condition that Qatar must stop supporting the Muslim Brotherhood.

The details on the lifting of the boycott and sanctions on Qatar by Saudi Arabia, the United Arab Emirates, Bahrain and Egypt haven’t been released yet. But Cairo’s stance on Al Jazeera since Sissi came to power in 2013 and his all-out war against the Brotherhood are the reasons Egypt joined the boycott.

Sissi, however, can’t oppose Saudi Arabia’s policy openly and sabotage his efforts to rehabilitate his country’s image in the United States via the agreement with Qatar. So he sent a representative instead of showing up himself.

But while Egypt’s relationship with Saudi Arabia was once seen as stable – as long as it was in a common front with the UAE and Bahrain versus Qatar – cracks have begun to appear. This is mainly due to Egypt’s fear that the Gulf states are gnawing at its status in the Middle East and Washington.

The tension between Egypt and the UAE increased in the late summer with Israel’s normalization agreements with the UAE and Bahrain. According to some Arab media reports, Sissi wasn’t in the loop.

Egyptian journalists told Haaretz that as far as they knew, Sissi knew about the plans but, as one put it, he was “less than enthusiastic about the UAE initiative, mainly because he wanted to broker the diplomatic moves with Israel himself.” He feared that the initiative would detract from Egypt’s leading role in peacemaking with Israel, which it had held since the 1978 Camp David Accords and on which its relations with the United States were based.

If Sissi was angry at the UAE’s independence, he hid it well. Sissi was the first to commend the agreement, even if he didn’t send Egypt’s ambassador in Washington to attend the signing ceremony. Still, his support for the Abraham Accords doesn’t mean all his differences with the UAE’s de facto ruler, Abu Dhabi Crown Prince Mohammed bin Zayed, have been ironed out.

But while the crown prince is willing to be flexible toward the Libyan government, Sissi is worried by the government’s Muslim Brotherhood-friendly approach. Egypt sees the Libyan front as a threat to its security, while for the UAE it’s a diplomatic campaign intended to expand its regional influence.

Meanwhile, the UAE promised to deposit about $3 billion at Ethiopia’s central bank to help it overcome its economic crisis and brokered the reconciliation between Ethiopia and Eritrea. According to reports (denied by Abu Dhabi), the UAE gave Ethiopia drones during the crisis with the Tigrayan minority and, with Israel, is advancing intelligence cooperation among countries in the region.

Cairo is concerned that things won’t go its way in the Horn of Africa. Egypt tried to persuade Sudan to support the Tigrayans and asked the UAE to put economic pressure on Ethiopia to accept Egypt’s demands about the dam that Ethiopia is building on the Nile; this would ensure that the project doesn’t restrict Egypt’s access to water.

But Cairo believes that the UAE hasn’t done enough to pressure Ethiopia. Reports about Israeli-UAE plans to build a canal from the Red Sea via Eilat to Haifa Port, the idea to lay an oil pipeline between Eilat and Ashdod, and the UAE’s bidding to buy Haifa Port all corroborate Egypt’s fears that the UAE and Israel will be bypassing the Suez Canal and severely eroding Egypt’s status in the region and a key source of income.

Egypt is also irked by Abu Dhabi’s massive involvement in Sudan. Abu Dhabi set in motion the normalization move between Israel and Sudan and, with the help of Israel, persuaded Donald Trump to remove Sudan from the list of terror-sponsoring states.

Plus, it mediated between Khartoum and Moscow to build a Russian naval base at Port Sudan. The agreement signed at the beginning of December is valid for 25 years and will let Russia keep at least four warships in the port. Port Sudan and the port of Tartus in Syria reflect Moscow’s desire to expand its military foothold in the Middle East.

Egypt, a member of the Arab coalition set up by Saudi Arabia for the war in Yemen, is anxiously following the UAE’s influence on events in southern Yemen, especially in Aden and the country’s Socotra Archipelago. Abu Dhabi is the main military-economic basis of the southern separatists seeking to bring back the independent state of South Yemen.

In November 2019, the separatists signed a reconciliation agreement with Yemen’s government, something Saudi Arabia has strived to implement. Only last month the government and separatists formed a parity government, but the agreement isn’t stopping the separatists’ cooperation with Abu Dhabi. Together they have de facto taken over the Socotra Archipelago. Here too, according to the Arab media, Israel is expected to receive a military stronghold.

The erosion of Egypt’s status in the Red Sea began when Egypt gave Saudi Arabia the islands of Sanafir and Tiran in exchange for massive aid. This rival/ally could take its place in this important strait and draw the U.S. administration’s attention.

This isn’t just a matter of prestige, it pertains to relations with the incoming Biden administration, a concern shared by all countries in the region. These relations will have implications not only on the regional strategic hierarchy Joe Biden will shape and the importance he attributes to each country. It could also dictate the regimes’ domestic policy.

One of the major issues Biden has spoken about is the wretched human rights situation especially in Saudi Arabia, Egypt and Turkey. Egypt has already felt the wrath of U.S. administrations that suspended aid or arms sales because of Cairo’s breach of human rights, oppression of civil society organizations and arrests of journalists.

Egypt has recently decided to release many prisoners, including political ones. Sissi stresses his support for the Christian minority and has hired consulting firms in Washington to improve Egypt’s image.

But Trump’s name for him, “my favorite dictator,” has stuck. It’s a hard image to shake. When the time comes to discuss Egypt’s financial aid, Sissi may find himself under heavy pressure from the new Democratic president and Congress, which will demand that he carry out thorough human rights reforms. This could undermine his rule.

Egypt is much more sensitive to such pressure than Saudi Arabia and the UAE. It depends on American aid and good relations with the administration, which can stop a loan from the International Monetary Fund or block investments.

In such a situation he’ll need the assistance of the Arab allies to loosen the stranglehold while they too compete for Biden’s heart. Israel may also find its status revisited by the new administration, which will no longer give it everything it wants.