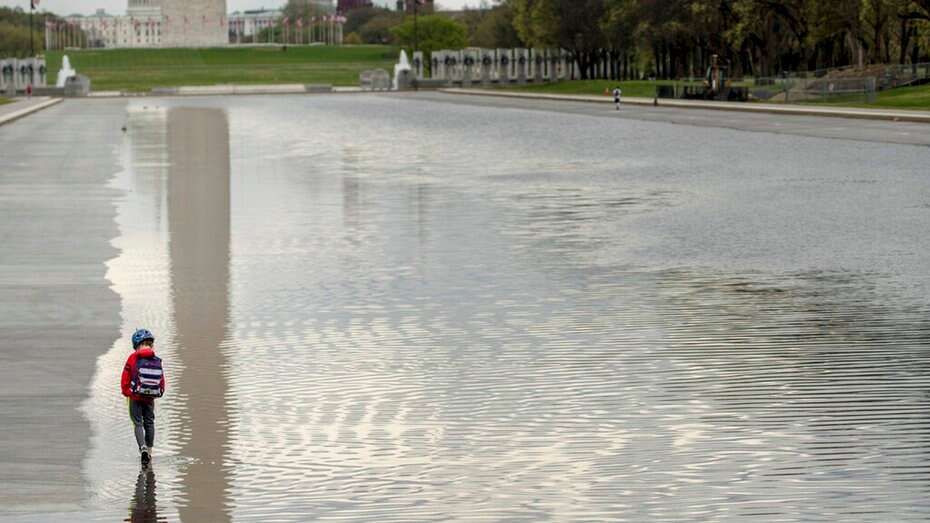 The Dome of the US Capitol and the Washington Monument are visible as Luke Shaw, 7, of East Falls Church, Va., gets off his bicycle to put his feet in the Reflecting Pool on the National Mall, Tuesday, March 31, 2020, in Washington. AP

By Agencies in Washington

According to the Johns Hopkins University Coronavirus Resource Centre, more than 4,000 people in the US have died due to Covid-19 and nearly 1,90,000 have been infected by it.

The death toll due to the deadly virus on Tuesday surpassed the number of fatalities in the 9/11 terror attacks. Nearly 3,000 people perished in the attacks carried out by al Qaeda terrorists in the US in 2001.

The Covid-19 death toll in the US is also higher than the total number of people killed in China due to the deadly virus.

China, which is the epicentre of the virus, witnessed 3,310 deaths. Globally, there are nearly 8,60,000 confirmed coronavirus cases and over 42,000 people worldwide have died of the disease.

At 82,294 cases, China now has the fourth highest number of Covid-19 cases following the US, Italy and Spain.

President Donald Trump on Tuesday warned that the US was headed for a “tough two weeks” and advised people to be prepared for the “hard days” ahead.

Deborah Birx, a member of the White House Task Force on coronavirus, based on a model from actual data from the ground, said the death toll in the US could be between 100,000 to 200,000, with the strict implementation of the existing mitigation measures including social distancing till April 30.

If no steps were to be taken, the death toll could range between 1.5 million and 2.2 million, she said.

White House officials and task force members asserted that mitigation and social distancing measures are the only way out to prevent the spread of the deadly virus despite that being painful and having its own toll on the American economy.

We are really convinced that mitigation is going to be doing the trick for us because what you have is you have an increase in new cases at a certain rate, Anthony Fauci, director of the National Institute of Allergy and Infectious Diseases Director and a member of the White House Task Force on Coronavirus, said.

Meanwhile, in New York City, the death toll has crossed the thousand-mark. According to the official data, the total number of Covid-19 cases in the city was 41,771 and 1,096 people died of the disease as of March 31.

New York State, the epicenter of pandemic in the US, had on Sunday passed the grim milestone of more than 1,000 deaths due to the novel coronavirus even as the city cheered the arrival of a gleaming 1,000-bed US Navy hospital ship as a sign of hope in its desperate fight..

People in New York and New Jersey lined both sides of the Hudson river to cheer the US Navy ship Comfort, a converted oil tanker painted white with giant red crosses, as it sailed past the Statue of Liberty accompanied by support ships and helicopters.

The Comfort will treat non-coronavirus patients, including those who require surgery and critical care, in an effort to free up other resources to fight the virus”

”It’s a wartime atmosphere and we all have to pull together,” said New York City mayor Bill de Blasio, who was among the dignitaries to greet the ship’s arrival at the Midtown Manhattan pier.

The US has the most confirmed cases in the world, a number that is likely to soar when tests for the virus become more widespread.

President Donald Trump told a White House briefing that more than 1 million Americans had been tested for coronavirus — less than 3 per cent of the population. While the US has ramped up testing after a series of setbacks, it still lags countries like Italy and South Korea on a per capita basis.S