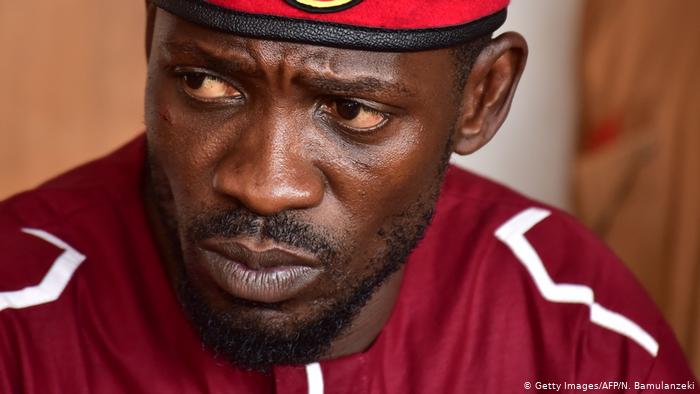 In his first public address since the January 14 presidential elections, National Unity Platform (NUP) presidential candidate Robert Kyagulanyi aka Bobi Wine called on Ugandans to reject the incumbent Yoweri Museveni as their president.

Museveni was announced by the Election Commission chairperson Simon Byabakama as the winner of the presidential polls with 59 per cent of the ballots cast followed by Kyagulanyi with 35 per cent. Days after the internet got switched back on in Uganda on Monday, several videos have emerged on social media allegedly showing ballot stuffing and ticking of ballots in favour of Museveni.

Videos of ballot stuffing in the full guard of the military and police are allegedly from western Uganda where Museveni according to the Electoral Commission results overwhelmingly won. Other videos allegedly from Kayunga, show abandoned ticked ballots in favour of Kyagulanyi.

Government has since justified the January 13 internet shutdown, saying the opposition had set up parallel tally centres and were planning on broadcasting fake results in favour of Kyagulanyi to incite the population.

“We categorically and unequivocally reject the manufactured results of Museveni and Mr. Byabakama and all the operatives. They were fabricated by Museveni and his operatives and Byabakama. That was an insult to the people of Uganda, and yes an insult to democracy. They do not in any way represent what the people of Uganda said on the 14th of January. We have overwhelming evidence to that, and therefore we reject those results…We call upon the people of Uganda to reject this mockery and to refuse to acknowledge Museveni as the winner of the 14th January polls. We defeated Museveni, we defeated them and we were supposed to be announced as winners,” Kyagulanyi said in his online address.

“Like most nationals and international bodies have noted, this election was marred by massive irregularities including state-inspired violence, intimidation, harassment of my supporters, myself and other opposition candidates. There was a lot of ballot stuffing with pre-ticked ballot papers in favour of Mr Museveni, alteration of results of declaration forms, the confiscation of declaration forms from our agents by security personnel, the flawed tallying processes etc etc. In many districts across the country, our agents were picked up and up to now we many of them are not where they are,” said Kyagulanyi.

Although his NUP party floored at least 13 ministers in the parliamentary election taking 53 seats of Buganda region’s 110 seats in parliament against NRM’s 31 and 15 Independents, Kyagulanyi said this year’s election was rigged with impunity. NUP further registered more success in Local Government polls.

The Electoral Commission, which had earlier this week uploaded election results on their website but pulled them down shortly after, has since said they are concerned by the allegations of vote-rigging and are investing the emerging incidences.

“EC has noted videos on social media showing individuals allegedly ticking ballots/stuffing ballots into boxes. EC took all measures to ensure elections are conducted with integrity. We consider the allegations seriously & will investigate to establish the veracity of the videos,” they posted Twitter on January 21.

The Electoral Commission also came under scrutiny for declaring Museveni winner last Sunday without including election results from over 1,200 polling stations.

“The candidate who was declared winner had obtained more than 50% of the valid votes cast. The EC considered the fact that the difference in votes obtained by the leading candidate and the first runner up would not be overturned by votes from the remaining 1,223 polling stations…The declaration met the legal requirement of Section 57(4) of the Presidential Elections Act, which provides that a candidate shall be declared as President if he/ she has obtained more than 50% of the valid votes cast at the election,” said EC.

Kyagulanyi has been under house arrest in Magere in Wakiso district since January 14 when he and wife Barbie Itungo Kyagulanyi returned from casting their ballots. Security personnel are camped inside within their home compound with the couple not allowed to leave the house even to pick vegetables from their home garden.

Also, no visitors are allowed into the home and Kyagulanyi’s lawyers have petitioned the High court to secure their freedom to liberty of their client. Locking up presidential candidates inside their homes is a tested tactic that has been previously deployed by the government.

Former Forum for Democratic Change (FDC) presidential candidate Rtd. Col. Dr Kizza Besigye got locked up for more than 40 days inside his home in Kasangati immediately after the 2016 general election. Like Kyagulanyi, Besigye was Museveni’s main challenger. Police have said Kyagulanyi is under guard because he promised to make Uganda ungovernable through street protests that brought down governments in Syria, Libya and Sudan.

“My home is surrounded by soldiers and the military, I’m indeed under illegal house arrest. I’m strong though…but what am going through is nothing compared to what other comrades have had to go through for past 3 years since we started the People Power movement…Many comrades are now dead, many are in hospitals nursing wounds of torture while very very many are in prison for standing what is right. I salute you brothers, you’re the reason why we soldier on and don’t give up,” said Kyagulanyi.

Kyagulanyi said they went into the elections well knowing the rigging history and tendencies of Museveni’s National Resistance Movement (NRM) but they had confidence in the ability of the people of Uganda to assert their voice.

“Like many dictators, Museveni organises elections to pay lip service to democracy and to try to buy legitimacy from the world especially the outside world. This time he was determined to take the nation through the same old ritual but unfortunately, he gravely miscalculated this time around,” Kyagulanyi said.

“Mr Byabakama and his Electoral Commission are still struggling to downplay the turn-up of the people of Uganda for the elections but even a blind person can see that this has not happened before. The turn up was massive and yes, people voted for change. They voted for the National Unity Platform and myself to lead them to turn a new page, to lead them into a new Uganda, to lead them into a country where we end the indignity and the pain of dictatorship that they have had to deal with for the last 35 years.”

Kyagulanyi further said that Museveni yet again committed another coup against the people of Uganda. He said by 6 pm on January 14 despite the widespread rigging, the widespread irregularities, “Museveni was defeated resoundingly from the east to the west, from the north to the south and central. It was very very very clear that the people of Uganda had rejected the Museveni dictatorship and chosen a new Uganda.”

Although President Museveni in his victory speech said this year’s election has been the most cheating-free in the history of Uganda, Kyagulanyi, on the other hand, said this has been the most fraudulent election that Uganda has ever had. He said the fraud in this election is ten times more than the 1980 election which Museveni hinged on to wage war against the sitting government of President Milton Obote.

According to Kyagulanyi, Museveni has gone on to commit even worse atrocities against the citizens of Uganda including murders, arbitrary arrests and election rigging. Kyagulanyi said two weeks to the election, his entire campaign team which included videographers, nurses, comedians, drivers, mechanics were arrested and 49 of these were charged in the military court and remand.

He said when he got nominated to run for the presidency, he started a revolution which he says is still going on.

“The regime is desperate to close this chapter and pretend that everything has moved on but I will tell them today; this is just the beginning. We are removing a dictator and we’re not going to rest until we accomplish this mission. The people of Uganda had every reason to fight for freedom and now they have an even bigger reason to fight – their victory was stolen and they will not give up until they defend their victory because it was stolen in daylight. The people of Uganda are not fools and certainly not this generation.”

Kyagulanyi said although police have since asked him to tell his supporters to call off any planned protests so he can secure his freedom again, Kyagulanyi said it’s not his duty to tell Ugandans not to peacefully protest against any injustice.

“Ugandans must resist this treasonous attempt for Museveni to impose himself on us as president because he’s not. Resisting tyranny is not only right but a duty for all the oppressed people. It is a duty that we must carry out. So I call upon all the people of Uganda, I encourage to all of you use non-violent and legal means and ideas at your disposal to ensure that we engage in this fight for complete freedom…The stolen votes belong to the people of Uganda. The people of Uganda must rise up to the occasion and free themselves and their country from that small group of gunmen that do not care about the future of Uganda whose only intention is to plunder Uganda and oppress Ugandans,” Kyagulanyi said.

On whether he will go to court to contest the election results, Kyagulanyi said they have listened to voices and previous petitioners including former Prime Minister and Go Forward presidential candidate Amama Mbabazi and Kizza Besigye who said going to courts filled with Museveni’s appointed judges is a waste of time.

Kyagulanyi, however, said with such overwhelming evidence, they believe they can secure court victory to overturn Museveni’s alleged election win.

The courts have pronounced that at least 3 of the last 4 elections have been rigged but the rigging was not substantive enough overturn the final results. But recent court rulings in Malawi and Kenya that dwelled on the process rather than the actual results have shown that election victories of incumbents in Africa can be overturned by courts.