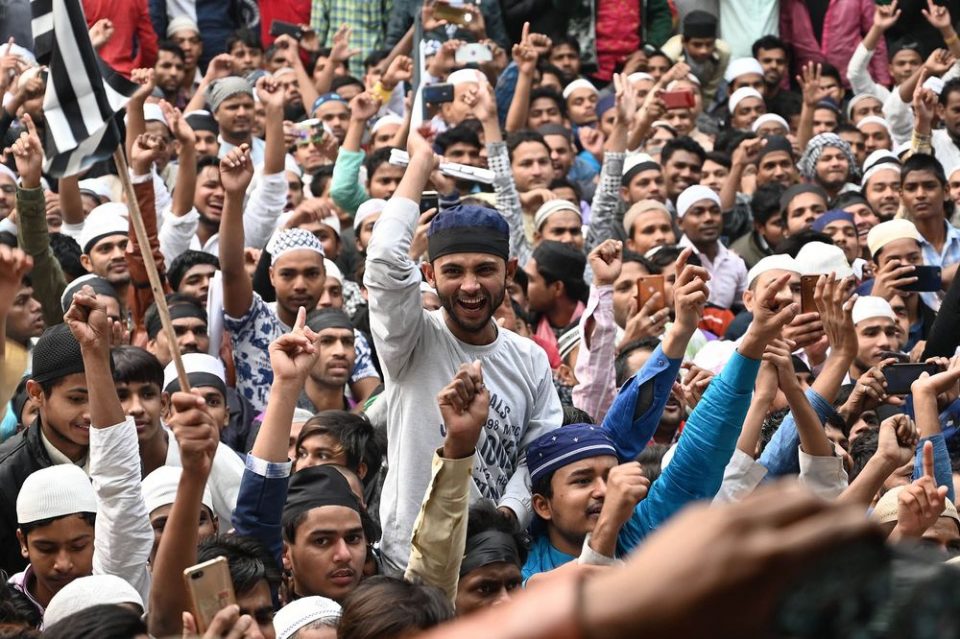 Back in 1947, India’s constitution writers envisaged a secular state where all citizens were equal before the law. But the rise of Hindu nationalism has been testing that ideal. Since Narendra Modi became prime minister in 2014, hard-liners in his Bharatiya Janata Party (BJP) have become increasingly emboldened to recast the country to give dominance to its Hindus, who form 80% of the population. Now a string of actions that followed Modi’s landslide re-election in 2019 is giving the country’s 170 million Muslims reason to worry whether their futures are at risk, and stirring wider unrest.

1. Why is Hindu nationalism on the rise?

As the Congress Party, which dominated the government for decades, became increasingly viewed as corrupt and ineffective, that created room for the emergence of the BJP and Modi. The BJP is inspired by the ideology of the country’s main Hindu nationalist organization, the Rashtriya Swayamsevak Sangh, or RSS, which promotes a more assertive, orthodox form of the religion that sees India foremost as a Hindu nation.

2. What are Modi’s ties to the movement?

Modi, 69, joined the RSS as a teenager, then shifted gradually to the BJP as a political organizer. He moved rapidly through the party hierarchy in his home state of Gujarat and became the state’s chief minister in 2001. The following year the state saw widespread religious riots that left more than a 1,000 people, mostly Muslim, dead. After 13 years as chief minister Modi turned to national politics. His first term as prime minister saw an increase in violence against minorities across the country, including mob lynchings. His re-election has emboldened fringe factions of his political base, especially in Uttar Pradesh, a state of 200 million people, where the BJP appointed a firebrand Hindu priest, Yogi Adityanath, as leader.

3. What else are the hard liners doing?

Hindu nationalists are pushing to build a temple on the site of a former mosque in the northern town of Ayodhya, which many Hindus believe was the birthplace of the warrior god Ram. After decades of legal dispute, the nation’s highest court in November gave Hindus control over the site. The BJP has promised to build a grand temple there and the court order clears the way for that. Since Modi’s rise to power, vigilante mobs across the country have attacked Muslims and lower-caste Hindus transporting cattle, especially cows — which many devout Hindus consider sacred. In Uttar Pradesh this has disrupted the multi-billion dollar meat export industry, which is driven by buffalo meat. Adityanath led a campaign that blamed Muslim youths for waging a “love jihad” by seducing Hindu women to convert them to Islam, which allowed mobs to harass people with impunity. At least one marriage was ordered annulled by a court.

4. What is Modi’s government doing?

The tilt in favor of Hindus has coincided with the rise of Amit Shah, Modi’s closest aide, as the second-most powerful leader in India. Not long after Modi’s re-election, the government moved to scrap seven decades of autonomy for Kashmir — India’s only Muslim majority region — and imposed restrictions on phones and the internet. Several local political leaders were detained. A citizenship registry introduced in the eastern state of Assam threatens to render stateless close to 2 million Indians, including Muslims. Shah, who is India’s home minister, wants to extend the registry nationwide. In addition, the BJP has used its dominance in Parliament to push through the Citizenship Amendment Law, which allows non-Muslim immigrants from neighboring, mostly Muslim nations to seek citizenship in India. The law — the first since Indian gained independence to explicitly exclude Muslims — had the unintended consequence of sparking protests throughout the country’s northeast, not against discrimination but against all “illegal migrants,” regardless of religion.

Modi has mostly kept a low profile, leaving Shah to announce the most-divisive elements of the BJP’s social and political agenda, including Kashmir, the citizens’ registry and the Citizenship Amendment Bill. Modi has repeatedly said his government wants to connect and bring Kashmir closer to the rest of India. “We want to create a paradise in Jammu and Kashmir once again and hug every Kashmiri,” he said at a rally in western India, according to news reports. On the citizenship law, he has assured border states worried about migration that their identity would be protected and their culture would “continue to flourish and grow.”

6. How have minorities reacted?

Muslims have remained mostly peaceful even in Kashmir. Some have filed petitions seeking a review of the top court’s Ram temple judgment. The political space for India’s minorities has been shrinking: In 2014, only 3.7% of members of Parliament’s lower house were Muslim, compared to 9% in 1980, even as the Muslim share of the population rose to 14.2% from 11.1% in the same period. The BJP in 2014 and 2019 was the only major political party with no Muslim members of Parliament.

7. What do Modi’s critics say?

That the rise of religious identity politics has shifted focus from fundamental problems such as malnutrition, quality of education, lack of sanitation and rising income inequality. India is saddled with the slowest economic growth in more than six years. While Indian businesses had initially welcomed what Modi said would be a pro-growth agenda, that enthusiasm seems to be waning. Billionaire Rahul Bajaj said in early December that business leaders were worried about the repercussions of criticizing Modi’s administration. It was a rare display of a corporate leader publicly expressing reservations about the government.

Before it’s here, it’s on the Bloomberg Terminal.