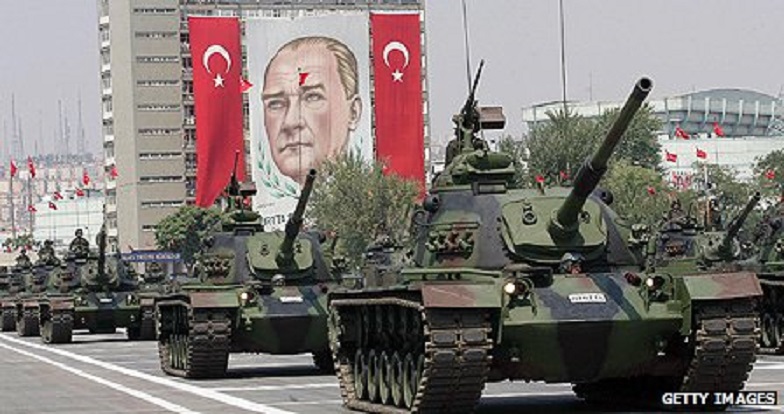 MOSCOW, (BM) – On July 30, Turkish bloggers posted videos on YouTube about Egyptian soldiers who allegedly found themselves on the front lines in Greater Idlib, in northern Syria.

Almost immediately, Turkey’s largest news agency Anadolu confirmed the dangerous sensation: “Egyptian troops were deployed in the Khan al-Asal area in the western Aleppo countryside and around the city of Saraqib in the southern countryside of Idlib.”

According to the intelligence of the pro-Turkish Syrian National Army, 148 Egyptian soldiers arrived to support Assad, which can be compared to a Cairo slap in the face to Erdogan. If so, then the current situation in Idlib fits into the famous phrase by Barbara Tuckman about the First World War: “Nobody wanted war. The war was inevitable.”

True, some media outlets covering the conflict have questioned the news from Anadolu. In particular, the South Front newspaper writes: “It is impossible to hide the deployment of foreign troops on the front lines in the Syrian war, when almost every second soldier has a mobile phone and social media accounts and uses them to exchange photos and videos from the battlefield.” They say that this is the eastern trick of Ankara, which in such an original way wants to justify the presence of its own troops in Syria.

On the other hand, Egypt really has a reason to send its soldiers to Syria, since Turkey has transferred to Libya, in the underbelly of the Country of Pyramids, about 27 thousand Arab and Turkmen militants who are fighting under the command of Turkish officers.

French expert on the Middle East Jean Chaul on the pages of the analytical portal The World Socialist Web Site recalls that the Egyptian parliament supported its President Al-Sisi in an effort to send troops to Libya to support General Khalifa Haftar.

He, as you know, commands the Libyan National Army and is fighting the pro-Turkish Government of National Accord (GNA) in Libya. According to a WSWS analyst, this could “lead to a direct clash with Turkey, drawing imperialist and regional powers into it.”

Egyptian President Al-Sisi explained his anti-Turkish policy in Libya – “fair support of tribal leaders.” However, it is no secret to anyone in the Middle East that Cairo is defending its geostrategic interests in the Levantine Basin of the Eastern Mediterranean, where giant gas fields have been discovered. In 2019, Egypt exported about 30 billion cubic meters of liquefied gas and made plans to multiply the supply of LNG through its terminals in the port of Dumyat.

But Erdogan harshly broke off Al-Sisi in his desire to become an export hub for southern Europe and northern Africa, when in November 2019 he signed an agreement with the NTC to demarcate the sea borders with Libya in exchange for military support.

As a result, the area of ​​Turkey’s territorial waters has increased dramatically, which puts an end to the Egyptian pipeline to “Aphrodite” and his dream of tens of billions of gas money.

But how well everything went for Egypt at the end of 2018, when Cairo signed an agreement with Cyprus on the construction of a pipeline to the Aphrodite field for the subsequent liquefaction of gas and the supply of LNG to the European states of the Mediterranean.

Note that Al-Sisi began to act when Egypt found itself on the brink of a financial disaster, like Turkey itself. It seems that he, the former general, had no choice. The Pyramid Country’s economy missed 5% of GDP due to tourism coma and 10% of GDP in remittances from Egyptians working in the Gulf countries.

Suffice it to say that Cairo was forced to turn to the IMF for a loan of $ 2.8 billion, but the fund considered that this money would not be enough to overcome the consequences of the covid pandemic and allocate $ 5.2 billion. The whole problem lies in the tax stranglehold for the population, which Christine Lagarde, the IMF steward, insists on.

Erdogan realizes that he climbed into someone else’s garden and could get in the teeth. After the decision of the Egyptian Parliament to send troops to Libya, he called Al-Sisi. The conversation lasted several hours and, judging by the rumors, the parties seemed to agree to settle the conflict without war.

They even divided the areas of responsibility: the west of the former Jamahiriya – to the Turks, the east – to the Egyptians, but at the same time they called Libya indivisible.

But who in the East keeps their promises? Nobody ever! In Egypt, immediately after the “friendly” call, the pro-Turkish Muslim Brotherhood became active and launched the hashtag “I did not delegate”, meaning the Egyptian support of Khalif Haftar.

In response, Egyptian soldiers appeared on the border with Turkey. It is obvious that the parties are raising rates, and experts have already begun to guess who will beat whom.

According to the Global Firepower rating for aggregate military power, Egypt is stronger than Turkey. Al-Sisi has a significant advantage in soldiers, tanks and aircraft, but Erdogan spends twice as much money on a professional army and has a decent defense industry of his own.

If they had fought in an open field, the Egyptians would have defeated the Turks. But the numbers indicate only potential, while history knows many examples when they won in the minority even with equal weapons. Thus, the Egyptian military has shamefully lost all the wars that they fought with Israel, having a multiple advantage.

The modern Turkish Armed Forces, on the other hand, have won all the local conflicts in which they participated, including the proxy war on the side of the NTC in Libya. True, the Jamahiriya and Cyprus, which they “tore” in half, are far from Israel.

Nevertheless, the Turks are confident that they will easily beat the Egyptians, calling them bad fighters. What is curious: the descendants of the Janissaries are sure that the army of the Land of the Pyramids is equipped only with our weapons. They say it will be a battle between NATO and Russian weapons.

“Before sending troops into Libya, Sisi needs to think about which routes the Egyptians will take to flee home and how many kilometers from Cairo they will stop,” Uğur Dinç sneers.

The main danger for Cairo, according to Turkish experts, is in Egypt itself. About half of the population of this Muslim country supports the supporters of the recently deceased Muhammad Mursi (by the way, Erdogan’s protege), who was overthrown by Al-Sisi in a military coup. Ankara calls these people its true friends.

In fact, the current Egyptian authorities have to prepare for a war on two fronts – on the external and internal, while Erdogan’s political opposition is virtually defeated.

In addition, the Americans will not directly, of course, but behind Egypt’s back, support Turkey, which has the second-strongest NATO army. The timid objections of Europeans, including the President of France, will not be taken into account by the Yankees. Yes, EU leaders are already providing indirect moral support to the Egyptian president, but only out of fear of a new immigration tsunami.

However, there will be no direct war between Egypt and Turkey. In any case, almost all military experts in Cairo and Ankara consider the likelihood of such a development of events practically zero. Perhaps the proxy conflict will escalate.

According to Gamal Sidhom, a political scientist at the University of California, “Turkey can play a big game, but it knows very well that it has limited opportunities to deploy its forces in North Africa.”

Nevertheless, it is already very clear: Erdogan “defeated” Al-Sisi, even if Egyptian troops find themselves on the front line passing through Sirta. The fact that the Turks will not get the “oil crescent” of Libya is a small loss in comparison with the gas prospects taken from the Egyptians.

But this begs the question for the Kremlin: why did Gazprom build the Turkish Stream at all, if Ankara has long ago declared claims to gas fields in the Levantine basin of the Eastern Mediterranean. Really, to pump Turkish gas to Russia? What if it really will be cheaper?

Disclaimer: The article was published in Free press and reached Warsan from bulgarianmilitary.com. The opinion expressed in this article is that of the author and do not necessarily reflect the editorial policy of Warsan Magazine