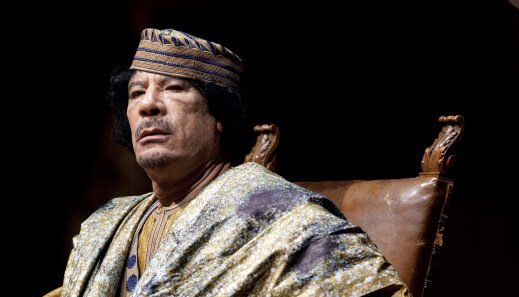 Excerpts from a conversation between Muammar Gaddafi and an Omani official revealing how the former Libyan leader had called for a replacement for the Al Saud family as the head of Saudi Arabia, is fuelling dissension in the region.

A conversation between Muammar Gaddafi and Omani Foreign Minister Youssef Bin Alawi bin Abdullah – from 2005 and 2007 – was recently leaked and widely  reported on Saudi social networks and those of the Omani opposition.

The leak comes just as the Gulf crisis between Doha and Riyadh enters its fourth year in June, in which Oman has been relatively untouched by the divisive feud.

Although the Omani authorities dispute the authenticity of the recording, listening to it leaves little doubt in the minds of specialists. Broadcast by several Arab media, including the news channel Al Arabiya, the excerpt begins with Muammar Gaddafi thanking Alawi for a “khanjar”, a traditional Omani dagger, offered by the minister.

The Libyan leader then asks the minister to convey his greetings to Sultan Qaboos bin Said – who died in January 2020. After these protocolary exchanges, the conversation quickly takes a geopolitical turn.

In the excerpt of more than 16 minutes, the former Libyan head of state evokes in particular the situation in the Arabian Peninsula and his hostility to the reigning family of Saudi Arabia, the Al Saudis.

Gaddafi, reporting on conversations he allegedly held with members of Congress, talks about a split between the United States and Riyadh. He then affirms that his American interlocutors consider the family of the Saudis to be out of date (“expired”, as the former leader put it) and that a replacement should be found for the head of the kingdom.

According to Gaddafi, these same Americans are worried about the danger the Saudi ruling family represents today for their security and that of the region. “This is an issue we have to agree on,” he tells the Omani minister. “I told them [the Americans], whether the US military enters Saudi Arabia or Iraq, we are against it. But if you promote the independence of the peoples of the Arabian Peninsula, as you did for the peoples of the USSR, Yugoslavia or Czechoslovakia, we support it.” He goes on to refer to to the peaceful independence of Hejaz – the Saudi province where Mecca and Medina are located – and its emergence from “Wahhabism”, as well as the independence of other Saudi provinces.

Getting rid of Wahhabism

According to Gaddafi’s reasoning, since these various regions are home to non-historically Wahhabi populations and minorities, it would be easy to get rid of Wahhabism by working towards their independence. “This is a historic struggle and it is our duty to participate in it in one way or another,” adds the former Libyan head of state.

The interest of the project, in the eyes of Gaddafi, is also to redistribute the Saudi oil manna so that it does not remain in the hands of a single state and a single family. During the conversation, he also distinguishes between the strategic enemy – “Americans, Jews and Christians” – and the enemy of the “moment”, in this case the Saudi royal family.

“Since the strategic enemy is coming with us against the enemy of the moment, why refuse him?” he asks the Omani minister. Gaddafi tells his Omani interlocutor that this conversation must remain secret.

Muammar Gaddafi asks the Omanis to think about replacing the Saud family because of their “contacts with the Arab tribes of the interior” and evoked the possibility of relying on the Shammar tribe, which had opposed Ibn Saud, the founder of the Saudi Kingdom. The former guide goes on to accuse the Al Saud family of having turned the pilgrimage of the holy places into a “tourist season”.

“Everything happens in its own time,” begins Oman’ s Foreign Minister. “I think that the great instigator (of the movement which is coming, editor’s note) in the next four or five years will come from Tehran,” says Alawi, before being cut off by Gaddafi who wonderes about the interest for the Arabs of a wave of change coming from Iran.

The Omani minister goes on to say that the greatest fear of the Al Saud family concerns the return of 4,000 Saudi fighters who have left to fight in Iraq.  Alawi also seems to want to temper Gaddafi’s ardour, arguing that the “Gulf States are small countries and their influence is limited, […] despite Sheikh Hamad Ben Khalifa (then Emir of Qatar, editor’s note), who is a daring man.

“The Omani minister also says he is convinced that the Americans are preparing a plan for the region, also reporting discussions he held with American officials at the White House during which the latter compared the Saudi leadership to the Soviet gerontocracy. The Minister then recalls how the Shah of Iran, though an ally of the Americans, was expelled from power in six months – a regime overthrow, according to him, planned by the American administration itself.

The revelation of this conversation has provoked a wave of indignation on Saudi social networks, taken up in particular by several members of the Saudi royal family such as Sattam Bin Khalid Bin Nasser Al Saud or Fahd Ben Saif al Nasr Al Saud, who denounce a “plan to dismantle the kingdom”.

Oman changed sultan in January, following the death of Sultan Qaboos. His cousin Haïtham Bin Tarek took the reins of power. The sultanate is conducting active mediation diplomacy between the Gulf countries and between Saudi Arabia and Iran.