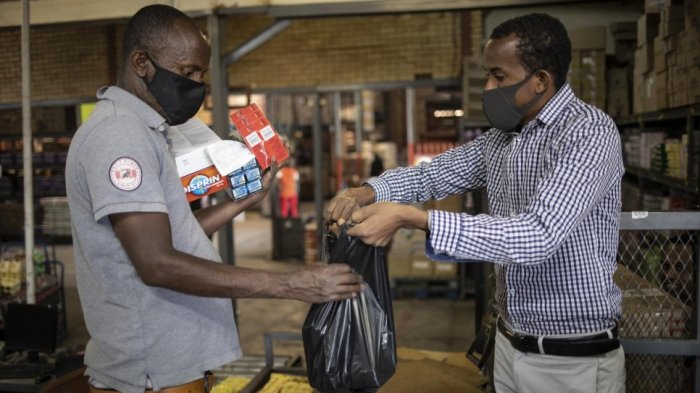 Amin Sheikh (right) hands a bag of items to a vulnerable South African during a food distribution in Pretoria, South Africa. © UNHCR/Hélène Caux

A community of Somali refugees stand together with their South African neighbours to assist those struggling the most during the COVID-19 pandemic.

Saeed Mohamed is part of a community of Somali businesspeople who distribute food to vulnerable South Africans, refugees and migrants in Pretoria, South Africa.
© UNHCR/Hélène Caux

It is the kindness of strangers that fuels Saeed Mohamed’s passion to give back. South Africans welcomed him as a refugee from Somalia and now he wants to help the community amid the country’s COVID-19 pandemic.

“If we lose hope, we lose our way,” he says. “When we came here, South Africans gave us a home. Now (I ask myself) what can we do for them?”

Saeed fled Somalia’s civil war as a 17-year-old back in 1991. In the years since, he has built a successful career as a banker and now considers himself part of a community of Somali businesspeople who found refuge in South Africa. Coronavirus has offered an opportunity to give back.

The group launched a care and compassion campaign as the national lockdown began in late March, to help people who were likely to struggle under the strict stay-at-home conditions.

“People gave us food and a place to sleep. I remember this very clearly.”

They started by distributing masks, hand sanitizer and food parcels to residents of informal settlements in Pretoria and Johannesburg, then moved on to other parts of the country.

Saeed is at the heart of this operation, fuelled by memories of his flight from Somalia and the kindness he experienced when he arrived in South Africa. “People gave us food and a place to sleep. I remember this very clearly,” he says.

It was seeing a disabled child playing in his neighbourhood that inspired him to start the campaign. Like so many families in South Africa, the child’s family relied on a daily wage from small businesses that were forced to close under the lockdown.

Saeed went to a local store and filled up a trolley with food for the child’s family, hoping to alleviate their struggle for a while. But he knew that more was needed. He called for a meeting with his fellow business community and the campaign was born.

South Africa’s lockdown, like others around the world, has been particularly tough on people in informal work. Despite its status as one of the wealthier African nations, around 30 per cent of South Africans are out of regular work. It wasn’t long before the residents of the country’s townships and shack towns began to struggle.

Refugees and asylum-seekers needing help to buy food and pay rent inundated the toll-free helpline of UNHCR, the UN Refugee Agency, in the lockdown’s first week. By the end of May, over 3,000 people had called and over 95 per cent of them had lost their source of income and faced hunger or eviction.

The government provides assistance grants to thousands of individuals and businesses but groups including asylum-seekers, insufficiently documented refugees, irregular migrants and the homeless are excluded.

Saeed’s campaign targets these groups and has assisted thousands of families in eight of South Africa’s nine provinces.

His friend, Amin, arrived in South Africa as a teenager ten years ago, excelled in school and attended university, thanks to the DAFI scholarship for refugees. He now runs the biggest of his family’s wholesale outlets in Pretoria West, which doubles as one of the five major distribution points for the campaign in Gauteng province.

“We understand how it feels to be hungry, so as a community, we stood up and answered the President’s call to help.”

On distribution days, Amin and his team head to low-income areas to distribute food parcels and has so far made three distributions to 380 families – both South Africans and foreigners, including the homeless.

“We understand how it feels to be hungry, so as a community, we stood up and answered the President’s call for people to help,” explains Amin, referring to President Cyril Ramaphosa’s call for everyone who can to help those in need get through the pandemic.

Across South Africa, this spirit of generosity is bubbling to the surface, with refugees and South Africans alike standing together in solidarity.

Désirée, a South African from Port Elizabeth, is busy dishing out portions of delicious hot food to homeless South Africans, migrants and asylum seekers, many of whom have lost their jobs.

“Helping others is in my blood,” says Désirée, who as a child, watched her mother feed the hungry in their neighbourhood.

From her kitchen in Pretoria, she feeds hundreds every Sunday, with the help of her two sons and some close friends.

“What affects me most is the sight of women on the streets with their babies,” she says. “The streets are dangerous, especially for them. They need food – a child must eat.”

Every Sunday, she gets up at 6am to light the stove in her small kitchen, then starts peeling and chopping vegetables. A friend with a car or a taxi waits outside, ready to dispatch the food to the rundown shelters and streets where her clients live.

Désirée and Amin often work together, combining forces and local knowledge to feed as many hungry people as possible. What unites them is the spirit of kindness and with COVID-19, they all saw the opportunity to extend a helping hand.

Outside Amin’s Cash-and-Carry is Regina, a South African and the proud breadwinner of her family. Previously, she was a physical therapist with a steady job in a private company until the pandemic. Now she relies on Amin’s food parcels to feed her children and elderly mother.

“COVID-19 changed my life to bad,” she says, shaking her head. “Now I don’t have work or a salary, so it has been hard for us. We are struggling.”

“It is tough but thank God, there are people ready to help.”

Violetta received food at a joint distribution by Amin and Désirée in the settlement where she lives in Pretoria North. Originally from Zimbabwe, she brought three of her four children to South Africa some years back, in search of a better life.

“I was not making much money before, but now, I am not making anything. It is hard because my children and I have to eat,” she explains. “We are relying on private donations from people like Amin and Desiree. It is tough but, thank God, there are people ready to help. I just want to have a job and for my kids to be able to study.”

For thousands more, these acts of kindness are a lifeline.

Désirée beams as she reflects on the help she provides to so many vulnerable people.

“The majority of the people I feed are youngsters far from home who have given up on life. I can’t give them much, but I can make sure they have a good meal every Sunday,” she says. “These babies could be our continent’s future leaders.”