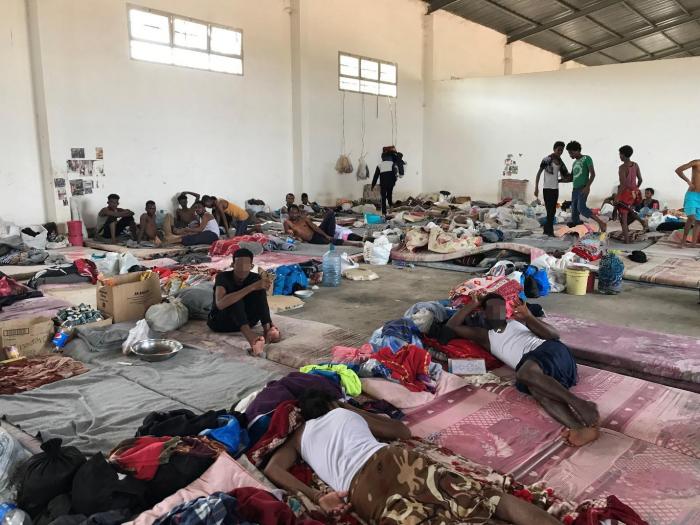 There have been multiple reports of excessive force used in the raids and arbitrary arrests, resulting in at least one fatality, many injured and the demolition of people’s homes

Over 5,000 migrants and asylum seekers have been detained in less than a week in Tripoli; Excessive force has been reported in raids and arbitrary arrests, resulting in at least one fatality and many injuries. Among the detained are hundreds of vulnerable women and children; Almost all those detained have been sent to dangerously overcrowded detention centers with insufficient access to food and basic services.

In the last few days, more than 5,000 migrants have been sent to Libya’s infamous detention centers in what the Libyan authorities have described as a security campaign against undocumented migration and drug trafficking.

There have been multiple reports of excessive force used in the raids and arbitrary arrests, resulting in at least one fatality, many injured and the demolition of people’s homes. Among the detained are hundreds of vulnerable women and children.

Detention centers have been taking in much larger numbers than their true capacity. Libya’s largest Detention Center, Al Mabani, is currently holding more than 4,000 people – four times its official capacity. Shara Zawaya Detention Center, designated for women and children only, has increased from just 71 people at the beginning of September to more than 520 today. Among these are more than 175 children, including 47 babies.

IRC staff who have since visited some of the detention centers report dire conditions due to extreme overcrowding and a lack of basic services including access to clean water, sanitation and food. In one of the detention centers, hundreds of detainees are currently locked in an open yard with no roof to protect them. Forced to sleep on the floor without enough mattresses or blankets, some detainees reported that they have only been fed one meal per day since being arrested nearly one week ago.

“We are extremely concerned about the critical and heartbreaking conditions migrants face in what are now dangerously overcrowded detention centers.”

“Our teams have heard reports of people being forced to use the floor on which they sleep as a toilet because they are not being allowed to access the latrines outside their cells.”

“We are particularly concerned about the potential spread of infectious diseases in such confined and unhygienic conditions. Our teams have already identified cases of Tuberculosis amongst those recently arbitrarily detained, while there have also been suspected cases of COVID-19.”

“With more raids continuing, and the numbers of vulnerable migrants detained likely to rise, it is only a matter of time before the detention centers reach a breaking point.”

It is not just the thousands of migrants and refugees recently detained who are in urgent need of assistance, the agency warns. Hundreds more migrants and refugees living in the Tripoli area are currently in hiding due to fears that they too will be arbitrarily arrested. Those in hiding are requesting urgent support, such as food, water and medicine. Yet due to the ongoing raids, humanitarian agencies are unable to reach them.

An IRC staff member who spoke to a family in hiding said:

“People are staying locked in their houses. Many have been without food for the past four days and are now starving. They are afraid to leave as the area is surrounded by police forces. They tell me that they are scared and want to know how they can survive.”

The IRC is calling on the Libyan authorities to take appropriate measures to protect migrants and refugees from further violence and arbitrary detention. The ongoing raids are likely to push extremely vulnerable people into the arms of trafficking networks as desperate migrants and refugees attempt to flee potential arrest and detention.

We urge the authorities to immediately release the most vulnerable, particularly women and children; and pending the release of all those arbitrarily detained, we request that safe and unimpeded access is guaranteed for humanitarian actors providing lifesaving assistance to detained populations.