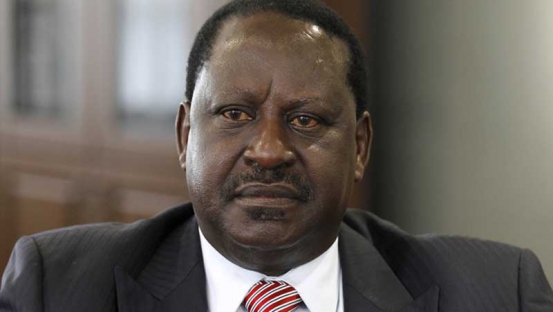 In an exclusive interview with the Citizen Television at his Opoda Farm in Bondo, Raila claimed that he was “tightening things from the inside” with regard to the purge against graft. He claimed Ruto had been hosting crowds in his home, slaughtering chicken and dishing out millions of shillings from unexplained wealth. In the interview which aired last night, Raila also questioned the source of Ruto’s millions which bamboozled the Kenyan church in 2019.

“Which individual can have such money? You are bringing crowds and crowds of people each and every day slaughtering chicken and paying for their transport and giving them petty cash, what is the source of such cash?” wondered Raila. Ditched public crusade Ruto has hosted delegations of thousands of people from more than ten counties including Vihiga, Kakamega, Kisii, Nyamira, Bungoma, Busia, Nakuru, Uasin Gishu and Trans Nzoia and Nandi in his Sugoi home during the festive season.

Raila claimed the same people were moving around with sacks of money to dish out every Sunday. He wants a lifestyle audit on the DP carried out. “We must have the boldness to hold the bull by the horn and to say enough is enough and ask these people to step aside, that is impunity of the highest order,” Raila said in the interview.

The former premier likened the situation obtaining in the country to the one painted by former British High Commissioner Edward Clay in early days of Narc. Angered by the runway graft of the time, Clay said, “they are vomiting on our shoes and they expect us to be in silence.” Raila claimed he had ditched his public crusade against grand theft and opted to move things within the government.

He said the war against graft needed to go a notch higher. “I have not reduced opposition, if some are crying foul it is because I have tightened things from inside. There should be no sacred cows if we expect to succeed,” he said, adding: “If the war on corruption is a sign that I have joined Jubilee, so be it. I don’t regret.” He took issue with Ruto for what he claimed was his obsession with the 2022 General Election, wondering why he believed he was the only one in the race. “There are so many Kenyans who want to be the president of this country in 2022. I do not know who told him he was to be alone. Kenyans will only go for one person in 2022. It is not a reserve of one person or anybody,” he said.

What he and Uhuru were doing, he said, is to make it easier for Kenyans to make informed decisions when that time comes. The opposition leader whose handshake with President Kenyatta on March 9, 2018 gave birth to the Building Bridges Initiative (BBI) said the country will undoubtedly go into a referendum next year. Better remuneration He said they will create a single bill that will touch on all the issues captured by BBI rather than go to Parliament that may not pass all the desired changes. He maintained that some of the changes implied in BBI automatically presuppose a referendum. Raila spoke highly of the return of the PM saying it will fast-track development in the country and further called for better remuneration of the office holder. BBI had proposed that the PM be paid only for his work as MP and nothing extra.

He claimed that the grand government that he coordinated as premier achieved more than the current Jubilee administration. The ODM leader noted that President Kenyatta had borrowed a similar model by appointing interior Cabinet Secretary Fred Matiangí to chair Cabinet sub committees while acknowledging that the hybrid system had worked well in France and Tanzania. At the sub Cabinet meeting the CS is allowed to come with the Principal Secretaries and their experts. This, Raila said, helped clarify issues before the Cabinet meeting that only allow ministers.

Raila disclosed that they decided to keep their handshake talks with Uhuru private until conculsion because they feared that it would be affected by those with vested interest. “Uhuru called the DP and briefed him about our talks. Equally I went to Stony Athi and also briefed my NASA counterparts, I ganged them up and I told them that this is what we have done. There was nothing to be hidden,” he said. He took a swipe at his NASA brigade saying that they could have yielded to fears that they did not show up at Uhuru Park during his ‘swearing in.’ “I communicated with them, they feared to come to Uhuru Park and they said it was dangerous and they feared intimidation. The fact is that those who who did not come did that by volition. They did not want to be there,” Raila explained.

On debt, Raila noted that Jubilee government had irresponsible borrowing and reckless appetite for expensive loans with short term payment and high interest. The World Bank He said these things are causing havoc in the economic management and the option for the government was to convert the short term loans into long term low interest ones that will help trigger investment on areas that would create jobs for the youth. “The World Bank and other institutions are ready to help us on this,” he said. While the country is addressing the debt in the country, Raila called for austerity measures to turn around the economy. He also claimed that Parliament and Judiciary were swimming in loads of cash and their expenditure was alarming. “Judiciary has a lot of funding.

The judges have a lot of money. The judges are driving Mercedes Benz vehicles which they change after three years. Just the other day CJ wanted a Mercedes Benz 500 just like the Speakers. This shows there is a lot of money. We need to cut down on the extravagance in all the arms of government,” he said He said a similar wastage was evident at the devolved government where MCA’s are running the show. “MCAS are also a problem. They want car grants, travel for bench marking and sometimes even want to fly and sort out their difference in another town which is costly and eats development money,” he said.