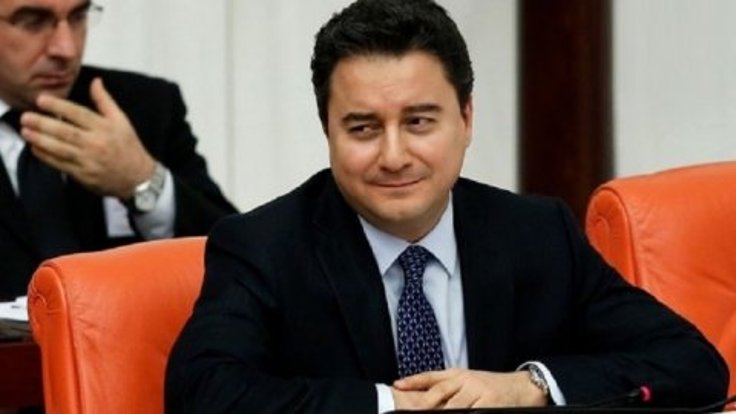 Article Summary
Ali Babacan, once a confidant of President Recep Tayyip Erdogan, says he’s building a mainstream political movement to restore the country’s international reputation and bolster its democratic credentials, but analysts wonder if it can draw enough support to challenge the ruling party.
REUTERS/Gary Cameron
Turkey’s deputy prime minister for the economy, Ali Babacan, answers a question at a news conference during the IMF spring meetings in Washington, DC, April 17, 2015.

ISTANBUL — Ali Babacan, a former lieutenant in Turkey’s ruling Justice and Development Party (AKP), said he planned to form a new political party by the end of the year to lead Turkey out of the “dark tunnel” it has entered as rights, freedoms and the rule of law have eroded under 17 years of one party’s rule.

Babacan, a former economy, foreign and deputy prime minister, quit the party he helped found this summer and now wants to form a new one to rebuild Turkish credibility on the international stage and draw foreign investment. He cited a weakening of institutions and a lack of transparency among the problems wrought by the AKP in recent years in a rare, expansive interview with HaberTurk late on Tuesday.

“We see that the country has entered a dark tunnel,” Babacan said. “We were compelled to start a new project after we saw that it was impossible to solve Turkey’s growing problems with the current administration.”

President Recep Tayyip Erdogan is facing a rebellion from within his own political movement after the AKP’s electoral setback earlier this year, when it lost a string of mayorships, including the biggest city of Istanbul and the capital Ankara, amid a painful economic slowdown. His erstwhile allies have accused Erdogan of economic mismanagement and undermining democracy by concentrating power in his own hands.

Babacan and Ahmet Davutoglu, a former prime minister, are leading two factions that have emerged from the AKP, promising a return to a parliamentary system, which Erdogan did away with last year after a constitutional referendum that gave him extensive executive powers.

The endeavors have garnered enthusiasm from Erdogan’s disaffected former supporters, and Babacan’s efforts in particular are likely to appeal to the Turkish business community and foreign investors, who credit him as the architect of Turkey’s record economic growth, which averaged 7% before he quit Erdogan’s cabinet in 2015. He served as an AKP lawmaker until last year.

But the 52-year-old faces reproach from critics who see him as one of Erdogan’s enablers on his road to authoritarianism. In the interview, he avoided outright criticism of Erdogan, who he said did not want him to leave the party.

For his part, Erdogan made a veiled reference to his former comrades on Wednesday, telling a business group, “Rather than the stones cast by our enemies, we have been injured by the roses thrown by those within us.”

“Our politics are no longer ideology based, but personality based. The AKP is the Erdogan party, without space for other voices,” said Emre Erdogan, a political scientist at Istanbul’s Bilgi University. Babacan “has to extricate himself and is already having trouble with that as someone who was part of the government until [2015].”

Babacan said that he and like-minded members had fought within the AKP to right the ship after it began to go off course in 2011, but debate within the party had become impossible due to a heavily centralized party structure. “We began to fear for future generations, that we would not be able to look into our own children’s eyes … if we sat on the sidelines,” he said.

Babacan said the new party, which is still unnamed, will establish itself as a legal entity within the next month and will then go on to build its organizational structure. He has met with some 700 people to discuss the party’s mission, and two dozen working groups are now devising its policy framework. Asked whether he was the leader or merely the party’s organizer, Babacan would only say he and his team would act in unison and want to avoid “another form of one-man” domination.

Former President Abdullah Gul, who also used to be a close Erdogan ally, turned down an invitation to lead the new party but shares their concerns about the direction Turkey has taken and offers counsel at regular meetings, Babacan said. He also said it would be difficult to merge camps with Davutoglu, who proposed working together after beginning efforts to form a new party last year “with himself at the center.”

Babacan offered few details on policy priorities, instead reiterating big-idea principles such as promoting human rights, free expression and rules-based governance. He was dismissive of the government’s economy recovery program, saying Turkey is unable to attract foreign inflows because of legal uncertainties and unpredictability.

Turkey’s partners have lost faith in its foreign policy, which has made it difficult to solve problems even when the country’s cause is justified, he said. “This isolation is very risky,” he said. “Turkey needs to rebuild its trustworthiness and its reputation and it has to do this based on universal legal principles.”

Babacan said his group is not looking to form political alliances with other parties but hopes to attract supporters from beyond the AKP’s ranks, which are mostly conservative Muslims. Sources close to the movement have said he does not want to create an AKP spinoff and has eschewed an openly Islamist identity.

But Bilgi’s Emre Erdogan said the new party would struggle to find a broad base. “It may attract people from the AKP who are unhappy with Erdogan [and others from] the center right, but he has little chance with the left, especially the CHP,” the secularist Republican People’s Party, the largest opposition party, he told Al-Monitor.

He predicted the new party may gain a handful of seats in the parliament if AKP lawmakers loyal to Gul join the cause, and in an election, may attract just 2% to 4% of the vote. But that could be enough to deprive Erdogan of an outright majority in the next presidential election, he said.

Meanwhile, the opposition is plagued by its own troubles. The CHP is embroiled in a messy intraparty drama after a newspaper columnist alleged that Muharrem Ince, Erdogan’s challenger for the presidency in 2018 and a rival of CHP chairman Kemal Kilicdaroglu, had secretly met with Erdogan to discuss taking over the party. While Kilicdaroglu has said he believes the claims, both Ince and Erdogan have denied it. Erdogan even said his party benefits from Kilicdaroglu remaining at the helm of the CHP, which has struggled to expand its share of the vote beyond 25% in parliamentary elections since he took over in 2010.

And the state’s crackdown on the country’s second biggest opposition party continues. On Tuesday, police arrested three female mayors after removing them from office on accusations they had links with an outlawed Kurdish militant group. The government has sacked 24 mayors from the Peoples’ Democratic Party in towns and cities across the mainly Kurdish southeast after they won election in March.

Ayla Jean Yackley is a freelance journalist based in Istanbul. On Twitter: @aylajean

From calm to confusion: How Kenya’s COVID-19 frontman lost his sheen