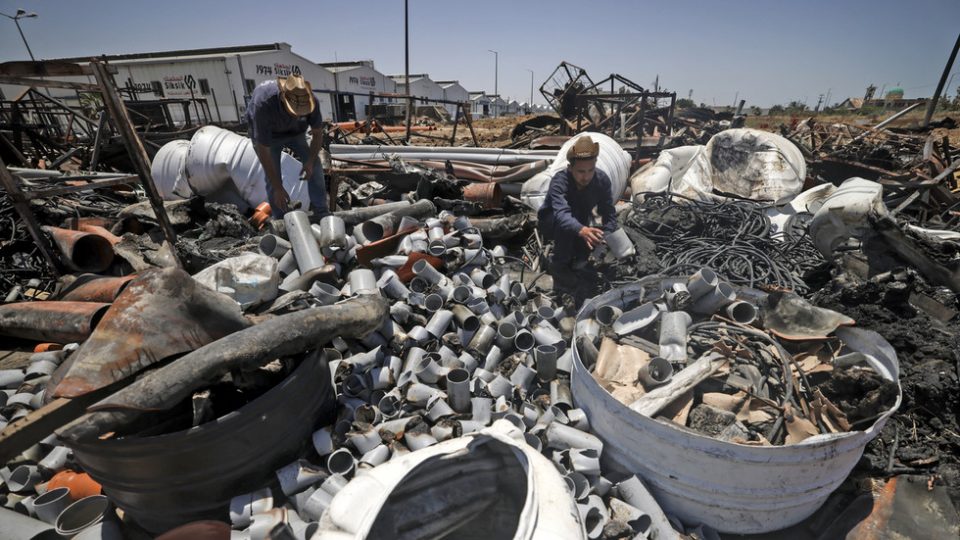 A Palestinian worker salvages items at a damaged plastic pipes factory in Gaza’s industrial area, on May 25, 2021. © MAHMUD HAMS / AFP

Richard Medhurst is a British journalist born in Damascus. Owing to his coverage of international relations, US politics, the Middle East and Julian Assange extradition he has built a successful YouTube channel and hosts a program on Press TV. Follow him on Twitter @richimedhurst

The Israelis are seeking to reframe their occupation of Palestine as something else, in order to hide their inhumane oppression. What’s happening in Gaza is not a ‘war’ nor a ‘conflict’, but a brutal military colonization.

Israel launched its latest offensive against the Gaza strip on May 10, bombing the Palestinian enclave by land and air. For several weeks prior, tensions had swelled in occupied Palestine, as Israeli forces cracked down on Palestinian protesters. At the Damascus Gate in Jerusalem, protests began against restrictions that Israel imposed on gatherings during the Holy Month of Ramadan. Meanwhile, Palestinians also marched against Israel’s plans to evict families living in the Sheikh Jarrah neighborhood, and the protests became intertwined.

While Israeli mobs marched through the streets unimpeded, damaging Palestinian-owned stores and chanting “Death to Arabs,” Palestinians were met with a brutal backlash from Israeli police, culminating in Israeli forces storming the Al-Aqsa mosque, firing tear gas and rubber coated bullets at people as they prayed, injuring more than 90.

Israel’s desecration of the third holiest site in Islam drew international condemnation and Hamas, which runs Gaza, demanded that Israel immediately withdraw from the mosque. This was ignored, so Hamas responded with rockets. Israel then began its offensive, which continued for eleven days. Thousands of reservists were also called up, prompting fears of a ground invasion.

Like previous wars against Gaza in 2009 and 2014, Israel purposely targeted public and health infrastructure – a hallmark of its military strategy, and a war crime under the Geneva Convention.

Israel put a desalination plant out of action which provided water to hundreds of thousands. Electricity lines were cut leaving barely five hours of power a day. Water mains were damaged so that sewage overflowed onto streets. The main road leading to al-Shifa hospital, the enclave’s biggest, was bombed, and other clinics were damaged. The only laboratory able to do Covid-19 tests was rendered inoperable.

Health workers and residents described horrific scenes of loved ones and neighbors buried alive under rubble, and of having to dig out dead bodies. By the end of the assault, 12 Israelis had died; while 242 Palestinians were killed, among them 23 girls and 43 boys. Around half were women and children.

Also on rt.com Gaza’s children have learned to hate Jews – but it didn’t have to be that way Several Palestinian families were entirely wiped out. Dr Ayman Abu al-Ouf, one of Gaza’s most renowned medical specialists, was killed in an airstrike on his home, alongside 12 members of his family.

According to Gaza’s Health Ministry, almost 2,000 Palestinians were wounded. It was reported that at least 2,000 housing units were destroyed and an additional 15,000 homes damaged.

Several residential buildings were completely leveled by airstrikes. On May 15, Israel bombed the offices of the Associated Press and Al Jazeera in Gaza. This was met by silence and feigned concern by Western liberal democracies, whose appreciation of a free press did not extend to Palestine that day.

Disproportionate force has always been a core pillar of Israel’s military, known as the Dahiya doctrine, which dates back to the 2006 war against Lebanon, and which was ruthlessly implemented against Gaza in 2009 and onwards.

Gaza is one of the most densely populated places on Earth, with two million Palestinians living on a tiny strip of land under blockade from Egypt and Israel since 2007. Its residents live at the mercy of a military occupation that bombs them with impunity, shielded by Western nations who whitewash its crimes.

On several occasions at the United Nations Security Council, the Biden administration blocked the release of a statement calling for a ceasefire because the language condemned Israel – which Israeli Defense Minister Benny Gantz thanked the US for in a tweet.

The animosity between Benjamin Netanyahu, whose 12-year tenure as Israel’s prime minister had been at risk, and his political rivals vanished once the strikes began. The attack on Gaza and Hamas bought him a little more time in office.

Protests in support of Palestine erupted worldwide. In London, 100,000 people took to the streets in solidarity. Palestinians themselves held a general strike on May 18. Shops closed as people marched in record numbers against Israel’s crimes. Two people were killed and over 100 were wounded by Israeli occupation forces who fired water cannons, tear gas and rubber bullets at them.

After 11 days of incessant air strikes from Israel and rocket fire from Hamas, a ceasefire was finally brokered by Egypt, entering into effect on May 21, 2am local time. Israel continued its bombings until the last minute. In the days after, Israeli police again entered the compound of Al-Aqsa mosque, firing tear gas and providing armed escorts to Jewish settlers who showed up in an act of provocation.

While the shelling may have stopped for now, the blockade and occupation have not. Gaza remains the world’s largest open-air prison, its residents unable to leave or rebuild, as generations continue to live in the ruins of one conflict after the other.

‘Israel’s right to defend itself’

A point often raised in Western political discourse is “Israel’s right to defend itself.” What of the Palestinian people? Do they not have a right to defend themselves? Are they expected to just tolerate apartheid, occupation and violence? How can a colonizer speak of defending themselves, when their very presence and occupation is an act of oppression? When one speaks of defense, then it is surely the unequivocal right of Palestinians to defend themselves, as millions of them remain stateless on their own land, dispossessed of their homes and human rights.

Israel claims to only target “terrorists” and “militants,” yet half the casualties, if not more, are always civilians. Decimating infrastructure and residential buildings is not defense. Leveling schools, hospitals, UN buildings and the offices of the international press is not defense. One of the most advanced militaries in the world unleashing its wrath on a civilian population without an army, let alone an air force or navy, is not defense. This is offense; it is cruel, barbaric aggression in its most violent form.

In a recent conversation I had with Palestinian Ambassador to Austria Salah Abdel-Shafi, he eloquently summarized how the Palestinian issue poses a fundamental problem for so-called Western liberal democracies who claim to champion human rights and equality, while giving Israel carte blanche as it denies Palestinians their human rights and levels their homes with no repercussion.

Israel is never held to account and sits above international and humanitarian law, annexing, colonizing and killing with impunity.

Its entire existence depends on ethnically cleansing Palestine and robbing Palestinians of their homes to make way for settlers from around the world. Israel wants to control the narrative around its actions, pretending that it is a victim and that this is all about Hamas.

This is naught but an attempt to reframe the occupation of Palestine and Israeli apartheid as something else in order to hide the oppression and inhumane behavior. What’s happening in Palestine is not a ‘war’ nor a ‘conflict’, it is a brutal military occupation which seeks to ethnically cleanse Palestine in order to make way for Jewish settlers. It’s colonization. The Palestinian cause is fundamentally rooted in human rights; in anti-imperialism and anti-racism. It is and always has been the story of resistance against colonizers.