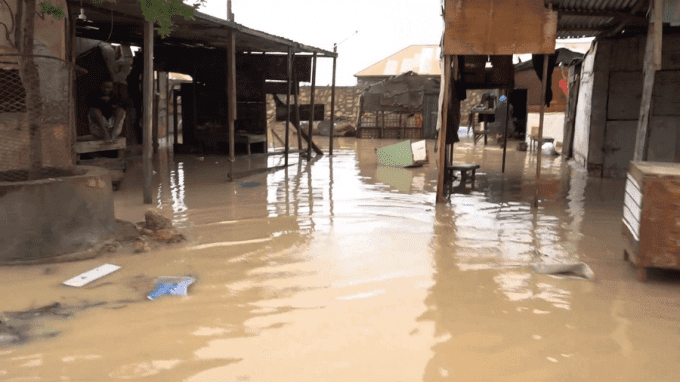 7 January 2021 – After Cyclone Gati struck Puntland State of Somalia on 22 November 2020, heavy rains and floods washed away homes, livestock, crops, and fishing boats. In its wake, the cyclone destroyed health facilities and safe sanitation systems in the area, leaving thousands of vulnerable people exposed without any shelter and livelihoods, as it hit districts in the midst of the coronavirus disease (COVID-19) pandemic, further affecting communities’ economic recovery.

Twenty-nine-year-old Aamino Ahmed and her family were among the people who were forced to flee to internally displaced people (IDP) camps following the cyclone. Along with her husband and nine children, Aamino moved to the Isnino IDP camp in Bossaso, where they are currently struggling to have a means to earn a living and access to basic needs like food, water, sanitation and health care, which have been totally destroyed.

Overall, the districts affected most by the cyclone include Alula, Benderbayla, Bosasso, Iskushuban and Qandala in Puntland, as well as Erigavo and Laasqoray in Somaliland. In these locations, afflicted communities, including families like those of Aamino Ahmed’s, and local authorities have appealed for support and increased interventions to support livelihoods, particularly targeting affected nomadic pastoralists, fishermen and traders. They have also requested for support in the repair of damaged infrastructure and basic social amenities such as schools, health facilities and water points.

In efforts to understand the humanitarian impact of Cyclone Gati and determine the most urgent needs of the population, the Humanitarian Affairs and Disaster Management Agency (HADMA) and UN Office for the Coordination of Humanitarian Affairs (OCHA) collaborated with the World Health Organization (WHO) and other humanitarian agencies to conduct a rapid inter-agency assessment in the affected areas, from 24-30 November 2020. The WHO team comprised health experts knowledgeable with the localities, and included regional polio officers, district polio officers and public health emergency officers.

The assessment also determined the available resources and capacities within districts affected, and will guide an effective response to the storm. The most immediate humanitarian needs of affected populations include food, water, sanitation and hygiene (WASH), emergency shelter and the prevention of waterborne, vector-borne and communicable diseases. These include cholera, malaria, dysentery, diarrhoea, and skin diseases due to families being inundated with contaminated water. Stagnant water in some areas also threatens to serve as ideal breeding grounds for mosquitoes. The situation is already resulting in an increase in malnutrition due to lost livelihoods and assets, and a potential increase in COVID-19 and other airborne diseases due to crowded living conditions.

Partners and organizations in the food security, livelihood and health and nutrition clusters have reached an estimated 72 000 affected people among those targeted. Shelter and WASH cluster partners have reached 25 000 and 38 000 people respectively, while the CCCM cluster is assisting about 26 000 people affected by the cyclone floods in Bossaso, one of the worst-hit cities.

As part of the response to the storm, on 10 December 2020, the Delegation of the European Union (EU) to Somalia commissioned a special flight at the request of the WHO in Somalia to airlift 3.1 tonnes of life-saving medicine and other emergency hospital supplies to Garowe. This joint operation remains part of the bilateral technical coordination mechanism established between WHO and the EU in Somalia, which aims to strengthen operational response activities, including for COVID-19.

The supplies, which were handed over to the Ministry of Health on 14 December 2020 for further distribution to communities in need, include 10 inter-agency emergency health kits containing various medicines for providing primary health care services, 11 cholera treatment modules, 2 outbreak investigation kits, 100 malaria testing kits. These materials should cover the medical needs of 2200 people over a period of three months and will be adequate in the management of waterborne and vector-borne diseases among 10 000 people for 3 months.

Further to the damage already caused, there are additional potential risks of more rainfall and flooding; contamination of water; and severe malnutrition. With the affected people having no access to basic health care needs, and limited sanitation, this could result in an increase in diseases such as vaccine-preventable diseases like measles, and waterborne diseases, and diarrhoea.

Some of Aamino’s family members, for instance, have already been suffering from diarrhoea as a result of consuming unsafe water after the cyclone destroyed water systems. In efforts to support families like Aamino’s, and to stop the spread of waterborne and vector-borne diseases, WHO will provide medical supplies for the management of diseases spread by contaminated water; establish a water quality surveillance system in cyclone-affected districts; and support sample collection and analysis for alerts of epidemic-prone diseases reported in affected districts. WHO will also support the deployment of 2 integrated emergency response teams (IERTs) for 4 weeks for the cyclone response. As additional support, the organization plans to deploy 9 district-based rapid response teams (RRTs) and 300 community health workers (CHWs) that were deployed to support COVID-19 activities in the cyclone-affected districts.

WHO will also provide airtime to health facilities in cyclone affected districts to submit timely reports for epidemic-prone diseases reported in the affected districts through the early warning and response network (EWARN) to strengthen surveillance, timely detection and response to alerts. The organization will further reinforce the coordination, supervision and surveillance activities through the existing health system, in cooperation with the health, WASH and nutrition cluster partners. Additionally, WHO will conduct fogging in 9000 households in Somaliland and Puntland to prevent the spread of malaria and other vector-borne diseases.

As long-term measures to provide sustainable solutions to emergencies, WHO will support the building of resilient health systems that can cope with the multiple hazards and be able to protect vulnerable communities from health emergencies. This will be done through capacity building of existing health workforce, strengthening coordination and leadership with affected communities and their leaders, and other clusters.

In response to the cyclone, humanitarian partners are collaborating with the Government to reach 101 000 people (about 84% of those affected by the cyclone) and are finalizing a response plan that outlines additional financial support they need to avert any additional suffering in the cyclone-affected areas. Overall, WHO requires US$ 1.23 m to continue to implement a timely intervention to prevent deaths and help Somalia overcome the negative consequences of the cyclone.