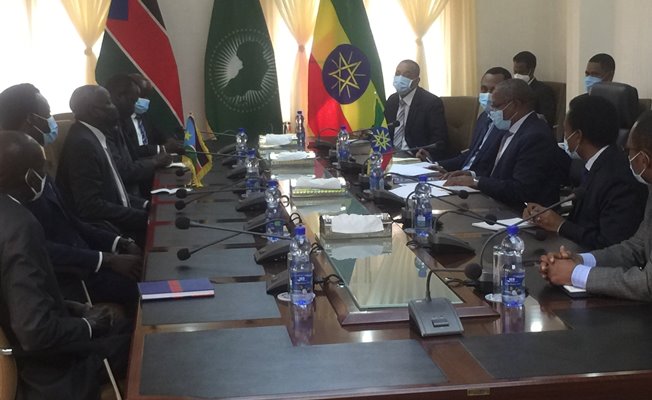 They have underscored the importance of implementing previously signed agreements that were designed to build roads and bridges to connect Ethiopia and South Sudan at various checkpoints.

In addition to the transmission of energy from Ethiopia to South Sudan, the two sides specifically took time on the possibilities of joint efforts in building the Gambella-Akobo-Bor road project.

On the occasion, Gedu expressed his satisfaction to see the South Sudan’s delegation that is keen to further strengthen the longstanding and cordial relationship between the two countries.

Nhial Deng Nhial said connecting the two countries through various infrastructure development projects would create the opportunity to expedite the process of the imminent economic integration of the region.

Governor of Jonglei state, Denay Chagor, Ambassador of South Sudan to Ethiopia, James P. Morgan, Jeremiah Deng undersecretary of the Ministry of Roads and Bridges of South Sudan, and others were part of the South Sudanese delegation.