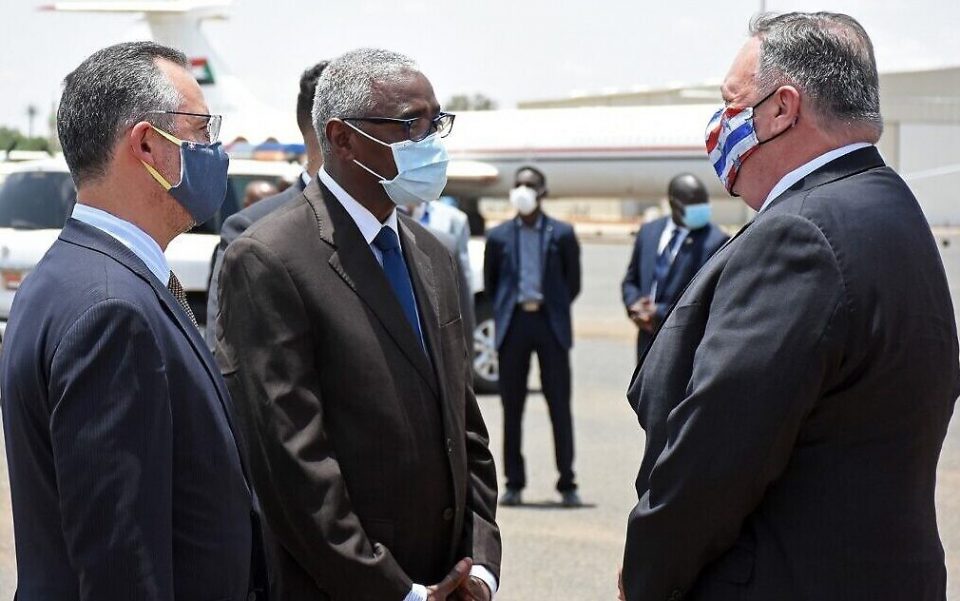 Mike Pompeo’s Middle East trip during the Republican National Convention has turned into a tour de force of scandal and failure. In that sense, it mirrors well both his tenure as secretary of state, and his boss’s time as president.

Starting in Jerusalem, Pompeo made a mockery of his office by giving a political speech, which might have been a violation of the Hatch Act, and doing so from foreign soil, a breach of diplomatic tradition in the United States.

Pompeo also visited Bahrain, where his attempt to convince the king to join the United Arab Emirates in normalizing relations with Israel was firmly rebuffed, and wound up his trip in Oman. There, Pompeo is reported to have discussed the ongoing blockade of Qatar by fellow Gulf Cooperation Council members Saudi Arabia, the UAE, and Bahrain. It is notable that Pompeo did not say that he had discussed this issue with Bahrain or the UAE, as one would expect if he were trying to resolve the stalemate. Instead, he discussed it with Oman, which has long been leading efforts to repair relations between the Gulf states.

Pompeo also attempted to convince Oman to increase efforts to normalize relations with Israel. Omani leaders have met with Israeli officials, including a 2018 visit to the country by Prime Minister Benjamin Netanyahu. But there is no indication that Oman is prepared to move further than it already has in normalizing ties with Israel for the time being, despite some raised hopes in both Jerusalem and Washington.

When he departed Jerusalem, Pompeo made the first-ever direct flight from Israel to Sudan. It was there that the secretary would demonstrate just how degraded the United States’ foreign policy has become under Donald Trump, and with Pompeo at the helm of the State Department.

Pompeo told Sudanese leaders that the United States would consider removing them from the list of state sponsors of terrorism — if Sudan pays us $330 million.

Let’s put this in context. In 1989, Omar al-Bashir led a bloodless coup and took over Sudan. He would rule for the next three decades, with an iron fist. Natural disasters, dictatorship, civil war, massive human rights violations, even genocide marked the history of Bashir’s rule. Sudan’s economy has been devastated many times, and it is one of the poorest countries in the world.

Last year, a popular, non-violent revolution forced Bashir out. The revolt’s leaders made a deal with the remaining military leadership to transition to a civilian and more democratic government. It’s a shaky arrangement, with many elements in the military government reluctant to cede power to civilian rule, and leading activists wary of the military. As University of San Francisco Professor Stephen Zunes described it to me after visiting Sudan in January, it is “a civilian-led government with a majority on the three main governing bodies, albeit with strong military representation.”

The transition has been difficult and uneasy, and it is complicated further by Sudan’s presence, along with only Iran and Syria, on the U.S. State Sponsors of Terrorism — or SST — list. Zunes told me, “The U.S. sanctions make it difficult for other countries and international financial institutions to do business with Sudan.”

Although many sanctions on Sudan were lifted in recent years, the country remains isolated from the global monetary system — the International Monetary Fund and World Bank — due to its SST listing. This prevents it from getting the capital it needs to recover from the devastation it suffered during Bashir’s rule, and the economic impact of losing much of its natural resources when South Sudan split off from the rest of country in 2011.

In other words, the Sudanese people desperately need to be removed from the SST list. Currently, about one in four Sudanese faces a shortage of food, and inflation in June was measured around 130 percent, a substantial rise over the African Development Bank’s already grave projection of 61.5 percent.

This is cruel and inhumane. It’s made all the more so by the fact that Sudan is being held responsible for crimes committed by Osama bin Laden, who was expelled from Sudan long before the September 11 attacks and, in any case, was only allowed in the country for a few years by Bashir and one of his aides, Hassan al-Turabi. Whether Sudan should be held responsible now that Bashir has been ousted is dubious but given the effects of the SST listing on the Sudanese people, it’s also irrelevant. A stable Sudan might be able to grapple with these issues and, if necessary, the costs. But extorting an impoverished country for what to it is a significant sum, but the U.S. amounts to less than pocket change is intolerable — especially as that country is actively trying to become more free and open.

Pompeo also tried to convince the Sudanese to open normal relations with Israel, something that had been floated this past February, when Israeli Prime Minister Benjamin Netanyahu met with Sudanese General Abdel-Fattah Burhan, the head of the ruling sovereign council, and hastily announced that Sudan and Israel would move to establish normal relations.

The angry response from the Sudanese people made Burhan back off quickly. Sudan’s Information Minister Fasial Saleh reacted similarly this week to Pompeo, stating “The transitional government does not have the mandate… to decide on normalization with Israel. This matter will be decided after the completion of the transitional authority.” In other words, come back to us when we have a permanent government, we can’t handle the disruption now.

In February, it seemed Sudanese leaders were testing the waters on warming relations with Israel, knowing such a move would please Washington and maybe convince it to remove Sudan from the SST list. Whether the Sudanese government transitions to democracy, reverts to a military dictatorship, or lands somewhere in between, its economy desperately needs the international assistance it cannot access while still on the infamous list.

The Trump administration need not have attached a price tag for Sudan’s long-ago dalliance with Osama Bin Laden. There is little to be gained by this maneuver except to extend the suffering of the Sudanese people and make it harder for the civilian, democratic forces in that country to prevail. But this is the nature and character of the Trump administration. If Sudan should finally find its economic and democratic balance, they are not likely to forget how the United States treated them as they tried to build their country.