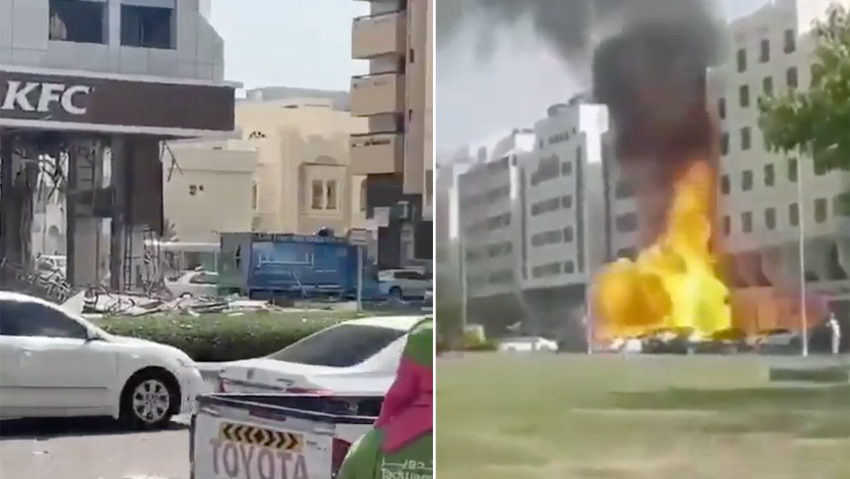 The blasts happened in Dubai and Abu Dhabi [Screengrab]

Three killed, several hurt in two separate UAE restaurant blasts hours before Trump and Netanyahu’s for further talks on normalisation.
Two separate explosions in different parts of the UAE killed three people and injured several others on Monday, as the first Israeli flight touched down for high-level talks following the normalisation deal.

The blasts occured at restaurants in the UAE capital Abu Dhabi and its hub for luxury tourism Dubai, as high-ranking officials – including a US delegation led by senior White House advisor and President Donald Trump’s son-in-law Jared Kushner – were set to land for further talks on normalisation.

Authorities said the incidents resulted from a gas leak and an exploding gas canister, making no mention of a deliberate attack but confirming the death of one man.

The Dubai explosion took place in the early morning at a four-storey building, prompting a rescue team to evacuate the building, The National reported.

A Dubai Civil defence spokesperson was quoted attributing the blast to a gas cylinder leak at a restaurant in the building’s ground floor.

According to the report, the police were called to the site for further investigations.

Abu Dhabi’s police also said a “gas explosion” was the likely cause of the blast in its emirate, which left at least two people dead.

The Abu Dhabi blast gutted KFC and Hardees restaurants on Rashid Bin Saeed Road – a popular street on the way to the Abu Dhabi airport, where the Israeli delegation was due to visit.

The ‘historic’ flight marks another step towards implementing the 13 August normalisation agreement between Israel and the UAE, which sparked anger across the Arab world.

Local media outlets reported only circulated official accounts from the government, despite the suspicious timing of the incidents triggering widesprea speculation on social media.

Observers said deliberate attacks were not common in the the UAE, but warned of restrictive media laws.

“#UAE has extremely restrictive media laws and the 2012 cybercrime law criminalises anything considered damaging to the reputation of the state, so getting clear and independent assessment of this kind of incident is potentially difficult if it contradicts the government account,” analyst Jack A Kennedy wrote in response to circulating news.