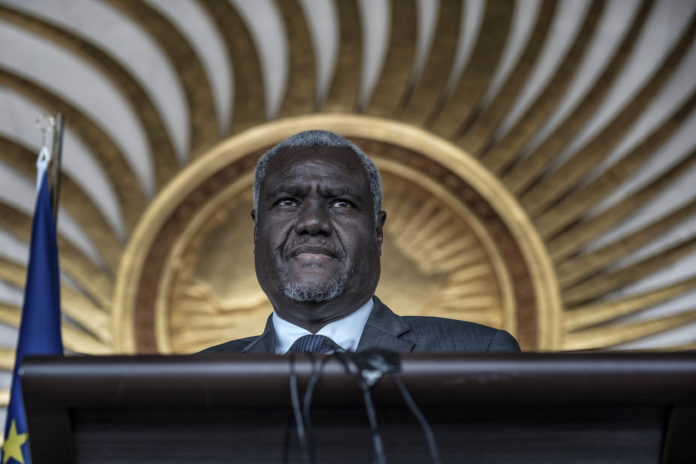 The Chairperson of the African Union, Moussa Faki Mahamat speaks during a briefing to the press, during the visit of the President of the European Commission in Addis Ababa, on December 7, 2019. (EDUARDO SOTERAS / AFP)
March, 2020

African Union staff have accused their boss of corruption, cronyism and a total collapse of leadership. They say that AU Commission chairperson Moussa Faki Mahamat is involved in a “mafia-style” cartel that operates with impunity at the highest levels of the institution.

The allegations were made in an interoffice memorandum that was leaked by multiple sources to the Mail & Guardian. The memorandum, dated March 6 2020, was addressed to Chairperson Faki, and signed by Sabelo Mbokazi, the head of the AU Staff Association, on behalf of the association.

The memo was written in the wake of an extraordinary meeting of the AU Staff Association, which was held on February 28. The meeting was called to discuss long-running grievances about the working conditions of staff at the AU Commission, which functions as a secretariat for the continental body.

In particular, staff raised concerns about the fact that senior appointments are routinely made without following due process. They claim that the recent confirmation of Hamza Sahal as head of human resources management was unlawful. “By and large the appointment is regarded by the staff as the manifestation of glaring cronyism and the total collapse of leadership which member states continue to underscore,” the memo said.

The M&G contacted Sahal — a Sudanese national who has previously worked as a human resources manager for Merlin International, Plan International and Save the Children, according to his LinkedIn profile — for comment, but did not receive a response by the time of publication.

The memo went on to outline more general problems with Moussa Faki’s leadership. “With you sitting at the helm of this organisation, the rules have been indiscriminately flouted and chaos prevails both at the headquarters and regional offices. The staff indicated that the moral fibre has decayed under your watch.”

It added that “the confirmation of ‘cronies’ without qualifications, without interviews and without following due recruitment processes” has turned the AU Commission into “a den without rules, characterised by arbitrary administrative decisions and impunity, which is manipulated by mafia characters”.

“The staff cannot sit and watch [a] few individuals destroying and paralysing the commision,” the memo said.

Moussa Faki declined to answer specific questions from the M&G. His spokesperson, Ebba Kalondo, said: “The chairperson has always engaged on organisational issues. In fact, he is the one who instituted the forensic audit currently under way in the organisation, amid other actions.”

In September 2019, a tender was issued for a consulting firm to undertake a “forensic and performance audit” of the AU Commission.

The M&G requested comment from a spokesperson for President Cyril Ramaphosa, who currently holds the rotating chairpersonship of the AU. Ramaphosa did not respond.

This is not the first time that people close to Faki have accused him and other senior leadership of corruption. In a November 2018 letter to the Ghanaian president — also leaked to the M&G — his deputy, Thomas Kwesi-Quartey, accused Faki of nepotism for appointing an “old crony” to a plush ambassadorial post. This was “not good governance”, Kwesi-Qartey said.

In February 2018, a member of the AU’s advisory board on corruption resigned, claiming that no effort was being made to fight corruption at the heart of the organisation.

Neither the full text of the report, nor the identities of the named individuals, have been publicly released. The M&G has confirmed that Peace and Security Commissioner Smail Chergui was among those named, although it is unclear in relation to which offence. In an article in the M&G on May 17 last year he denied any wrongdoing. The AU Commission has been accused of covering up the contents of the report.