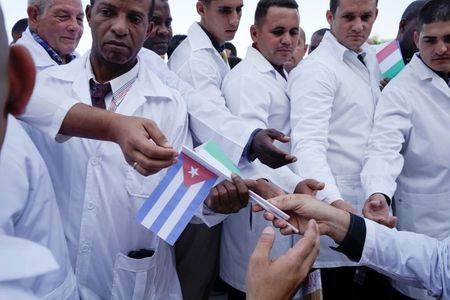 Despite hefty US sanctions inflicted on it for more than half a century, Cuba has mobilized its medical corps around the world to distribute a new “wonder drug” that officials there say is capable of treating the new coronavirus, Newsweek reported.

The drug, called Interferon Alpha-2B Recombinant (IFNrec), is jointly developed by scientists from Cuba and China, the report said.

Already active in China since January, the Cuban Medical Brigades began deploying to dozens of nations, providing personnel and products such as its new anti-viral drug to battle the disease that has exceeded 400,000 confirmed cases across the globe, the report said.

Cuba first used advanced interferon techniques to treat dengue fever in the 1980s and later found success in using it to combat HIV, human papillomavirus, Hepatitis B, Hepatitis C and other diseases, the report said.

The use of Interferon Alpha-2B Recombinant “prevents aggravation and complications in patients reaching that stage that ultimately can result in death,” Cuban biotech expert Luis Herrera Martinez said, according to a recent Yale University Press Blog feature written by the University of Glasgow’s Helen Yaffe.

She called the treatment a potential “wonder drug” against the new coronavirus.

Yaffe, who recently authored a book on Cuba’s post-Soviet economic experience entitled We Are Cuba!, told Newsweek that she knew of at least 15 countries that have contacted Cuba to request the drug, along with “local mayors and hospital directors who are anxious to get hold of the Cuban anti-viral to meet the crisis.”

Interferon Alpha-2B Recombinant has not been approved to treat Covid-19, but has been proven effective against viruses similar to it, the report said.

It has been selected along with 30 other drugs to treat Covid-19 by China’s National Health Commission. The World Health Organization will be studying interferon-beta, along with three other drugs, to determine their effectiveness against the new coronavirus, the report said.

Cuba’s ambitious anti-pandemic efforts are hindered, however, by decades-long US sanctions that one Cuban official described to Newsweek as “the main obstacle not only to respond to major health crises like Covid-19, but the main obstacle to the country’s development at any area.”

“The lifting of the blockade against Cuba would have an extraordinarily positive impact on Cuba and mostly in the health sector, which has been one of the most damaged areas since the establishment of the blockade almost 60 years ago with more than 3 billion in economic losses,” the official added.

“Despite the blockade, Cuban doctors are working in 59 countries around the world, 37 of which have confirmed cases of Covid-19,” the Cuban official told Newsweek.

These countries include Latin American and Caribbean countries such as Grenada, Jamaica, Nicaragua, Suriname and Venezuela but also Italy, which has witnessed the deadliest Covid-19 outbreak to date, the report said.

At home, Cuba’s experience with Covid-19 has been relatively mild. The country of roughly 11.5 million people has so far registered 40 cases and a single death as of Tuesday, according to the Cuban Ministry of Public Health.

A ‘mafia-style’ cartel is running the African Union, claim staff