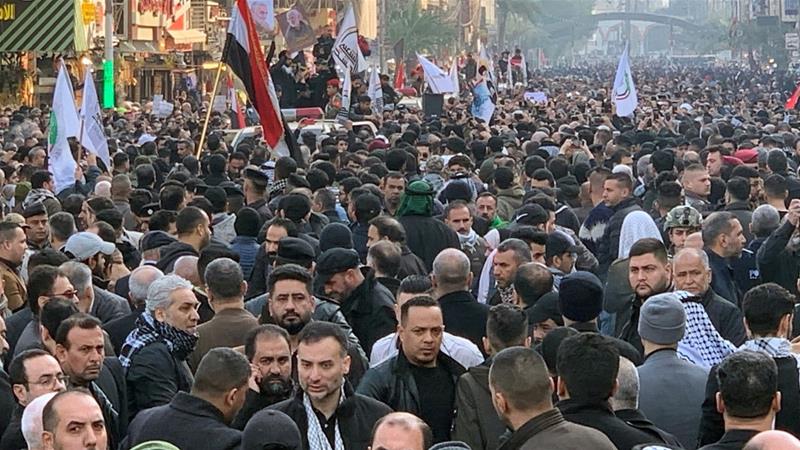 Thousands of mourners have joined the formal funeral processions for Iranian Major-General Qassem Soleimani, Iraqi paramilitary commander Abu Mahdi al-Muhandis and six others killed in a US air strike in Iraq‘s capital, Baghdad.

Dressed in black and raising the flags of the powerful paramilitary umbrella group Hashd al-Shaabi (Popular Mobilisation Forces or PMF), the large crowds first gathered near the Shia shrine of Kadhimiyya in Baghdad to pay their respects to the dead.

The attack came just days after Hashd members and supporters attempted to storm the US embassy in Baghdad, angry at US air attacks against Kataib Hezbollah – a member of the umbrella organisation – positions in Iraq and Syria. Al-Muhandis had been among the crowds of PMF members and supporters.

“We are here to mourn the death of these brave fighters, Soleimani and Muhandis,” 34-year-old Amjad Hamoud, who described himself as a member of the PMF, told Al Jazeera.

The mourners, most of whom are supporters of the PMF, marched through the Green Zone where government offices and foreign embassies, including the US embassy, are based.

As the body of Soleimani reached the crowds, mourners who had gathered in Baghdad to receive him, marched along with the convoy chanting, “you never let us down”, in reference to the late Quds Force leader.

Iraq’s prime minister Adel Abdul Mahdi – who stepped down in November after to mass anti-government protests that started in early October – but who remains in office in a caretaker capacity, attended the funeral processions.

Also attending were several powerful Shia leaders including former Prime Minister Nouri al-Maliki, who now leads the State of Law Coalition and has close ties with Iran. Hadi al-Amiri, leader of the Fateh bloc and and closely tied to the PMF, Shia scholar Ammar al-Hakim, leader of the Hikma parliamentary bloc, and Faleh Fayyad, head of the Hashd al-Shaabi, were also at the processions.

Mohannad Hussein, media representative of the PMF, which organised the funeral processions, told Al Jazeera that the crowds will end their march at Hurriya Square in central Baghdad for members of the public to pay their final respects before the bodies are taken to the holy Shia city of Karbala where funeral prayers will be held later on Saturday.

Karbala is the base of Iraq’s top Shia leader Grand Ayatollah Ali al-Sistani who condemned the US attack and called on all parties to exercise restraint in a statement from his office for the Friday sermon.

Hussein said the bodies will then be taken to the holy Shia city of Najaf where al-Muhandis will be buried later on Saturday along with other Iraqis killed in the attack. The body of Soleimani will be flown to Tehran for funeral processions on Sunday.

Iran is observing three days of national mourning in honour of Soleimani who is widely believed to have been the second-most powerful figure in Iran. Supreme leader Ayatollah Khamenei promised to exact “harsh revenge” for the targeted killing.

Some of the mourners called on Iraq and the PMF to respond to the attack, saying it violated Iraqi sovereignty and targeted their fighters.

“We want the Hashd and the Iraqi government to respond to the US attack in an appropriate manner,” said Ali, 24, who described the killings as “very painful”.

“If a political response isn’t enough, then militarily one is necessary,” he added.

“This is a very sad day for all of us. But each fighter [in the PMF] considers himself a martyr and so we are ready to give up our lives like our leaders did,” said Hussein.

“The US has opened a new chapter in its relations with Iraq and made clear that it is the real enemy,” said Hussein.

“As part of the military, the Hashd al-Shaabi will do what the government orders us to do. We are ready to fight,” he added.

The Iran-backed PMF was integrated into Iraq’s armed forces last year, but critics say that some factions continue to operate independently of Baghdad.

Iraq is poised for a tense period ahead, according to analysts, as top Shia leaders – many of whom are expected to attend the processions – warned of repercussions following the attack.

Iraq’s prominent Shia leader Muqtada al-Sadr called on his militias (Army of Imam Mahdi) and “other national and disciplined” armed groups to be prepared to protect Iraq, adding that the killing of Soleimani will not weaken Iraq’s resolve.

Qays al-Khazali, head of the Asaib Ahl al-Haq armed faction – part of the PMF – said “all fighters should be on high alert for upcoming battle and great victory”.

“An end to Israel-US presence in the region will result from the assassination of Soleimani and Muhandis,” al-Khazali said in a statement published by Iraqi media.

“This is a dangerous time for Iraq as it moves into a period of greater instability and uncertainty,” Renad Mansour, head of the Iraq Initiative at Chatham House told Al Jazeera.

Mansour said Iraq would witness changes in the coming days.

“The Iraqi parliament will most likely ask US forces to leave Iraq, while the US may become antagonist vis-a-vis Baghdad,” explained Mansour.

Iraq’s parliament is due to sit on Sunday to discuss the US air strike after Prime Minister Adel Abdul Mahdi called on lawmakers to hold an emergency session and address the killings of Soleimani and al-Muhandis, which he called a violation of sovereignty.