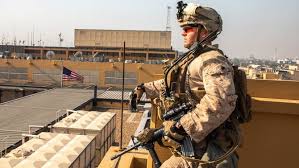 US official said they have increased security and defensive measures at Iraqi bases which host coalition troops. (File/AFP)
AFP

BAGHDAD: US-led forces helping Iraqi troops fight militants have scaled back operations, a US defence official told AFP Saturday, a day after an American strike killed top Iranian and Iraqi commanders.
“Our first priority is protecting coalition personnel,” the official said, saying the US-led force had “limited” their training and other anti-militant operations.
“It’s not a halt,” the source said, adding: “We have increased security and defensive measures at Iraqi bases that host coalition troops.”
The official said the change came after a series of rocket attacks by pro-Iran factions on US troops in recent months.

The spokesperson for NATO also announced that training missions in Iraq will be suspended.
The NATO mission in Iraq, which numbers in the hundreds, trains the country’s security forces at the request of the Baghdad government to prevent the return of the Daesh group.
But US surveillance efforts were now focused on potential new attacks instead of the Daesh group.
The rocket attacks, which killed one American contractor last month, have stoked fears of a proxy war between the United States and Iran on Iraqi soil.
Those worries skyrocketed Friday after a US strike in Baghdad killed Iranian general Qasem Soleimani, the head of the Islamic Revolutionary Guards Corps’ Quds Force foreign operations arm.
The strike also killed the deputy head of Iraq’s Hashed al-Shaabi, a network of mostly Shiite factions close to Iran and incorporated into the Baghdad government’s security forces.
On Saturday, the Hashed said a new strike had hit a convoy of their forces north of the capital, with Iraqi state media blaming the United States.
But the spokesman for the US-led coalition denied it.
“There was no American or coalition strike,” Myles Caggins told AFP.