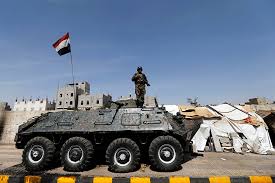 Saif then placed his and STC’s forces around the camp.

The Yemeni government blames UAE-backed separatist movements of rebelling against the government in Socotra province, which is formed by six islands.

Armed groups of STC attempted a failed coup in October 2019 to seize Socotra.

UAE-backed militias raided the airport in Socotra in December and took hostages. The Socotra Governorate on April 8 blamed the STC of conspiring to kill Governor Ramzi Mahrous.

The UAE is part of a Saudi-led coalition that launched a massive air campaign in 2015 against Iran-aligned Houthi rebels, who overran much of Yemen, including capital of Sanaa, a year earlier.