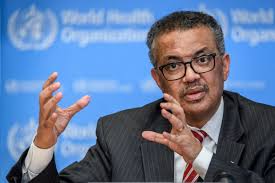 “We are still in the acute phase of a pandemic, so now is not the time to cut back on funding,” Dr Hans Kluge, the WHO regional director for Europe, told a virtual briefing in response to a question about Trump’s remarks.

Trump and key Republican supporters and sympathetic media outlets have recently escalated a months-long campaign accusing the WHO of being biased towards China, and demanding a congressional investigation.

There is mounting criticism of the Trump administration’s handling of the coronavirus as US deaths hit a new record. The US now has nearly 400,000 confirmed cases and 13,000 deaths, compared with close to 83,000 cases and 3,337 deaths in China. Globally there are more than 1.4 million cases and just over 82,000 deaths.

The latest flare-up, which appears designed to distract attention from Trump’s record during the outbreak, has fuelled concerns from WHO insiders that the campaign could dangerously undermine confidence in the organisation’s advice at a crucial time.

Wuhan, the Chinese city at the centre of the outbreak, has begun to return to normal life, raising fears among some US rightwingers that China’s economic recovery could steal a march while the US is in the midst of its own outbreak.

Trump said the WHO had been “wrong about a lot of things” and threatened to put a hold on WHO funding. When asked if that was a good idea during a pandemic, Trump denied having made the threat and then said his officials would “look at it”.

“We’re going to investigate it, we’re going to look at it. But we will look at ending funding, yeah, because you know what, they called it wrong, and if you look back over the years even, everything seems to be very biased toward China. That’s not right.”

David Nabarro, the WHO’s special envoy for Covid-19, told the Guardian that while it was inevitable that “institutions, governments and individuals” would be held accountable for their handling of the coronavirus pandemic, that needed to take place after the crisis was over.

“The world is in the middle of an extraordinary and epic struggle against [coronavirus]. We’re learning all the time. How to reduce the suffering, the consequences of the containment and efforts to prepare the world to live with it. With something like this, each decision that we make is closely scrutinised – as it should be.

“But for now I would like to suggest we wait until the time the emergency subsides, when of course there will be inquiries and individuals, governments and institutions are scrutinised.”

Dr Bruce Aylward, a senior adviser to Tedros, defended the UN agency’s relationship with China, saying its work with the Beijing authorities was important to understand the outbreak.

“It was absolutely critical in the early part of this outbreak to have full access to everything possible, to get on the ground and work with the Chinese to understand this,” he told reporters. “This is what we did with every other hard-hit country like Spain and it had nothing to do with China specifically.”

A number of prominent figures associated with Trump have been involved in the campaign against the WHO. They include John Bolton, Trump’s former national security adviser, the Florida Republican senator Rick Scott and the Republican congressman Guy Reschenthaler, who introduced a resolution in the House of Representatives on Tuesday calling for the US to defund the WHO unless Tedros resigns and the organisation is investigated over its treatment of China during the pandemic.

The onslaught has been echoed on social media, sometimes with racially offensive imagery against the Ethiopian official. The criticism brings together a series of rightwing preoccupations including a distrust of UN bodies, pro-Taiwan activism and a fear that China’s economy could recover before that of the US.

Trump has previously questioned China’s reported numbers of infections, saying last week they were “a little on the light side”, and he has referred to the outbreak as the “Chinese virus”, prompting complaints from Beijing.

On Tuesday New York state reported its highest single-day increase in the death toll, with 731 fatalities. At least 3,544 people have died in New York city alone from Covid-19.

Newly released memos revealed that Trump was warned at the end of January that tough action was needed to avert hundreds of thousands of American deaths.

The WHO declared Covid-19 a public health emergency on 30 January. Almost a month later Trump, who had compared the virus to influenza, said it was under control in the US. He declared a national emergency on 13 March.