Trump supporters gathered in large numbers outside the US Capitol building to protest the outcome of the November 3 presidential election a day before the US Congress was slated to ratify Joe Biden’s Electoral College win. Supporters of US President Donald Trump clash with police officers outside of the US Capitol Building in Washington on January 6 (Photo Credits: Reuters)

Reports suggest Trump supporters tore through four layers of security fencing and are now attempting to occupy the US Capitol. In the process, supporters of the Republican President also fought with federal police in an attempt to overrun them.

Trump supporters gathered in large numbers outside the Capitol building to protest the outcome of the November 3 presidential election. This comes a day before the US Congress was slated to ratify Democrat challenger Joe Biden’s Electoral College win.

BREAKING: Trump supporters have breached the Capitol building, tearing down 4 layers of security fencing and are attempting to occupy the building — fighting federal police who are overrun

This is the craziest thing I’ve ever seen in my life. Thousands, police can’t stop them pic.twitter.com/VVdTUwV5YN

Addressing supporters on Wednesday, US President Donald Trump encouraged them to march to the US Capitol to pressure Congress to reverse former vice president Biden’s electoral win. Soon after, thousands of Trump supporters were seen gathering at the area between the Washington Monument and the National Mall. 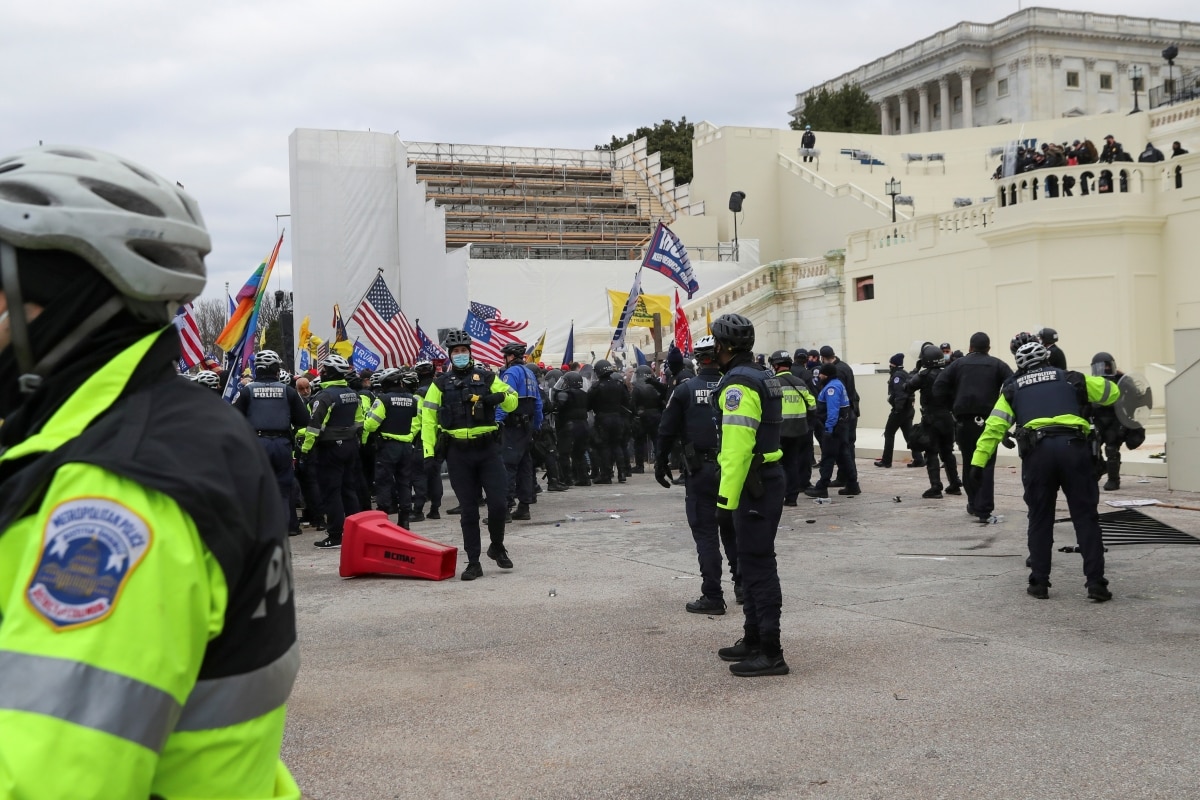 Supporters of US President Donald Trump clash with police officers outside of the US Capitol Building in Washington on January 6 (Photo Credits: Reuters)

Videos of the clash between them and the federal police show some Trump supporters yelling “take the Capitol!”
Some even managed to climb the scaffolding outside the Capitol that had been put in place for Biden’s January 20 inauguration.

Police officers are holding them steps away from the Senate chamber, which is locked. Senators are inside. I see a few confederate flags. pic.twitter.com/YI7X7KmuUG

US Capitol Police has asked occupants to evacuate two congressional office buildings, according to a report by the Wall Street Journal.

Whoa: Trump supporters going at it with the police on the steps of the Capitol as Congress counts the Electoral College ballots inside pic.twitter.com/LiQhaa5KkQ

With Democrat Raphael Warnock managing to wrestle the Georgia Senate seat from incumbent Republican Senator Kelly Loeffler in the runoff election, Wednesday came as a shocker for Trump supporters. The Senate runoff between Democrat Jon Ossoff and Republican David Perdue remains too close to call. If the Democrats stake claim to both the seats, they will take control of the US Senate.

Mike Pence didn’t have the courage to do what should have been done to protect our Country and our Constitution, giving States a chance to certify a corrected set of facts, not the fraudulent or inaccurate ones which they were asked to previously certify. USA demands the truth!