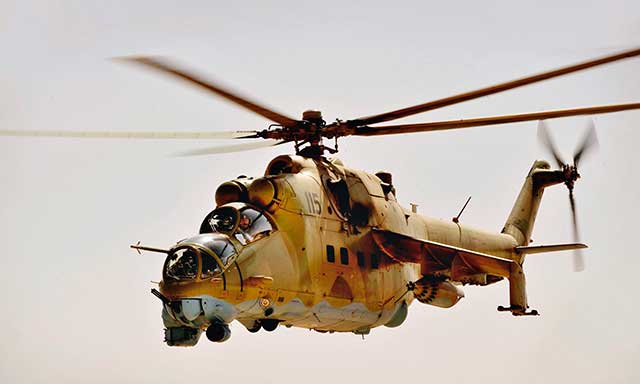 TRIPOLI, (BM) – An air defense system that was available to the forces of the Government of the National Accord [GNA] of Libya shot down a helicopter carrying Russian mercenaries from the private paramilitary company Wagner, learned BulgarianMilitary.com.

This information is provided by a number of Turkish media, which claim that the helicopter was either a Mi-35 or a Mi-8. The air defense attack on the Russian helicopter took place in the area of ​​Al-Jufra air base. According to Turkish media and their sources, the helicopter was completely destroyed and the fate of the crew and Russian mercenaries is still unknown.

Apart from the Turkish media, the information is also confirmed by General Abdulhadi Dirah, Commander of the Joint Operations Forces of the Government of the National Accord for the Sirte and Jufra region. According to him, a powerful explosion blew up the flying helicopter. Russian media also reported the incident, an indication that the information may be credible.

Military experts say a mobile anti-aircraft missile system is the reason the helicopter was shot down, but confirmation of this information has not yet been made.

There is no exact or specific information on the number of soldiers who were on board. Tensions analysts in Libya say the incident could seriously affect attempts to cease fire in Libya and even expect a further escalation of hostilities in the coming days. We recall that only a week ago, the Libyan National Army [LNA] re-launched ballistic missiles.

Turkey shot down the MiG-29 fighter near Sirte, Libya

As we wrote a few days ago [September 8 – ed.], a MiG-29 fighter jet was shot down over a desert in Libya near the Sirte area. Since then, several allegations have found their way to publicity, one of which is that the Turks shot down the fighter.

This statement comes from the American side. According to them, the fighter belonged either to the Russian Air Force or to the air force of Haftar’s army, the so-called Libyan National Army.

The American edition of The Drive claims that the fighter was hit by a projectile, after which it continued to fly for another five minutes. This statement makes sense, because depending on how a fighter can be trained, it can continue to fly. According to the publication, this is exactly what happened after the pilot ejected.

This is exactly what we announced a few months ago, as well as the Pentagon, that Russian Wagner fighters were located around Sirte in support of Haftar.

The publication notes that the fighter may have been shot down by a missile fired from the MIM-23 Hawk anti-missile system. We announced a few weeks ago that Turkey had deployed several systems of the same systems, so it is very likely that this air defense system hit the MiG-29.

Turkey has deployed the MIM-23 Hawk in Libya in support of the Government of National Accord, which is actually waging a civil war with Haftar’s army.

Analysts believe that the downing of the MiG-29 fighter is a kind of revenge by the Turks. Recall that weeks before this incident, just MiG-29 fighters carried out air strikes on a Turkish base in Libya and destroyed at least two MIM-23 Hawk systems.

Despite all the speculation and allegations, so far there is no official confirmation from Ankara that it was the Turkish military that shot down the fighter. We know from experience that Turkey, unlike Israel, never misses a moment to brag about its military successes, using them as a propaganda tool in President Erdogan’s otherwise shaky political ideology.

Russian experts have tried to counter US allegations that the plane was shot down by a missile, saying it was impossible to hide the wreckage of the downed plane, which would later show whether it had been hit or had a technical malfunction.

Having ruled the country since 1969, Muammar Gaddafi was ousted and killed in the 2011 civil war. As a result, the country found itself in a situation of dual power: in the east, a parliament is sitting in Tobruk, supported by the Libyan national army, Field Marshal Khalifa Haftar, and in the west, in Tripoli, a government of national accord.

At the same time, the GNA is actively supporting Turkey, and Egypt and Saudi Arabia are on the side of the LNA. Its unofficial allies are France and the UAE.