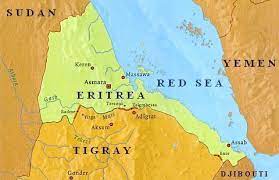 The fiercest and most widespread battles between government forces and Tigray rebels are being fought Tuesday in northern Ethiopia on frontlines along the more than 1,000-kilometers (621-mile) Eritrea-Ethiopia border, a military source told Anadolu Agency.

“The battles flaring up today is the fiercest and they cover many fronts including across the Ethiopia-Eritrea border,” according to the source who spoke on condition of anonymity because he was not authorized to speak to the media.

He said it was the latest phase in Ethiopia’s counter-offensive as federal forces keep closing in on the Tigray regional capital of Mekelle.

But rebels from the Tigray People’s Liberation Front (TLFP) blamed the latest flare-up on what it described as offensives by the Eritrean military.

“Eritrean forces have launched a full scale offensive on all fronts today — all the way from Tekeze through to Irob. Heavy fighting in May Kuhli, Zban Gedena, AdiAwala, Rama, Tserona and Zalambessa. (Prime Minister) Abiy Ahmed’s Eastern command, significant elements of Northwestern command and three commando divisions have also been deployed alongside Eritrean forces. [Thousands] of Amhara (regional) special forces as well as Fano (youth vigilante group) have also joined the offensive. Eritrea is deploying its entire army as well as reservists. Our forces are heroically defending their positions,” TPLF spokesperson Getachew Reda wrote on Twitter.

War between federal forces and the rebels resumed Aug. 24 after a five-month lull that followed a humanitarian truce declaration by Ahmed.

Earlier in August, the TPLF looted 570 liters of fuel from a World Food Programme (WFP) humanitarian warehouse in Mekele.

“It is impossible for WFP to distribute food, fertilizer, medicines, and other emergency supplies across Tigray. It also prevents us from powering generators and vehicles, so that WFP and humanitarian partners can meet the needs of the vulnerable populations of Tigray, where an estimated 5.2 million people face severe hunger,” said making humanitarian assistance WFP head David Beasley.

The war started in November 2020 after rebels stormed federal army bases stationed in Tigray, including in Mekele.

The Somali clan revolution threatens the future of the jihadist movement

Evil empire: Let the monarchy die along with Elizabeth