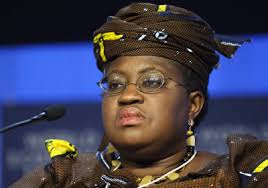 The World Trade Organization (WTO) moved a step closer to appointing its next director general on Wednesday, with top officials recommending Nigerian candidate Ngozi Okonjo-Iweala for the job at a meeting in Geneva.

However, the United States told an informal gathering of the heads of delegations that it will not back her candidacy, meaning Okonjo-Iweala does not yet have the consensus needed to secure the job.

WTO General Council chair David Walker told the same meeting that Okonjo-Iweala is most likely to achieve consensus, having gained the backing of a sizeable majority of WTO members.

“One delegation could not support the candidacy of Dr Ngozi and said they would continue to support the South Korean minister [Yoo Myung-hee], that delegation was the USA,” said WTO spokesman Keith Rockwell.

China also took the floor at the meeting to say that it “supported the process of the troika and that the process had been well-run and they respect the outcome”, Rockwell said, the implication being that China supported Okonjo-Iweala.

In total, 27 delegations took the floor to support the Nigerian‘s candidacy, with only the US differing.

This comes after a formal “confessionals” process conducted by the WTO’s troika – the three ambassadors that head up its core divisions – who spent days gleaning member preferences.

The final decision will now be kicked down the road to a formal meeting of the General Council on November 9, after the US election, with ample time for back channelling in between. If a consensus cannot be agreed on November 9, then the WTO race will go for the first time to a members’ vote.

With the US and China backing different candidates, the possibility of a deadlock remains, with the superpower rivalry simmering underneath the four month election process.

Those familiar with Beijing’s thought process suggest that because of China’s strong trade and investment ties with Africa, as well as the fact that an African leader is more likely to champion a developmental trade agenda, China was likely to back Okonjo-Iweala, even after it emerged during the campaign that she holds a US passport.

“The US should stop behaving as if it were above international organisations like the WTO,” said Victor Gao, a Beijing-based international relations expert and former translator to paramount leader Deng Xiaoping, who added that despite the nationality issue, China was expected to back the Nigerian candidate all along.

The European Union has also thrown its considerable clout behind the African candidate. Japanese government sources briefed local media that it would prefer Okonjo-Iweala over rival candidate Yoo Myung-hee of South Korea, not an unexpected development given the troubled trade relationship between the two East Asian export powerhouses.

The US prefers Yoo, the current South Korean trade minister, who was at the helm as Seoul and Washington signed their renegotiated bilateral free trade agreement last year, and who is extremely well-regarded by the Trump administration and in Washington policy circles.

A source briefed on the US government’s thinking said that Washington preferred Yoo because of her broader trade experience compared with Okonjo-Iweala, who has had a long career in development finance and politics, but no direct experience in trade issues.

“The Nigerian delicate is seen as a seasoned international diplomat but does not have much experience on trade matters or the WTO. So, Washington seems to favour somebody who knows the WTO,” said the source, adding that the US alliance with South Korea is another important factor in its support.

Politico reported on Tuesday that the US State Department directed local embassies to sound out support for Yoo, in a sign that it favoured the Korean candidate.

“Yoo has a good reputation in the United States because of the way that she handled the US-Korea negotiation – she was actually a counterpart of mine and some others at [the US Trade Representative], and we all really liked working with her,” said Clete Willems, a partner at law firm Akin Gump, who helped renegotiate the US-Korea trade deal with Yoo as a counterpart.

In South Korea, former trade officials said that the reality was beginning to set in that the race was slipping away from Yoo, who worked her way through the civil service for 25 years to become trade minister, where she has helped tie up series of successful trade deal negotiations.

“She has had an outstanding record as a deal maker in the Korean government and that experience would be quite useful in breaking the deadlock at the WTO. I think we need that sort of deal maker in the WTO,” said Kim Chulsu, former WTO deputy director general, and the first South Korean candidate to run for the body’s top office back in 1995.

Asif Qureshi, a professor in international economic law at the Korea University in Seoul, added that while “the hope is for positive outcome, a touch of realism is creeping in as a consequence of the EU’s stance and declaration for the Nigerian candidate”.