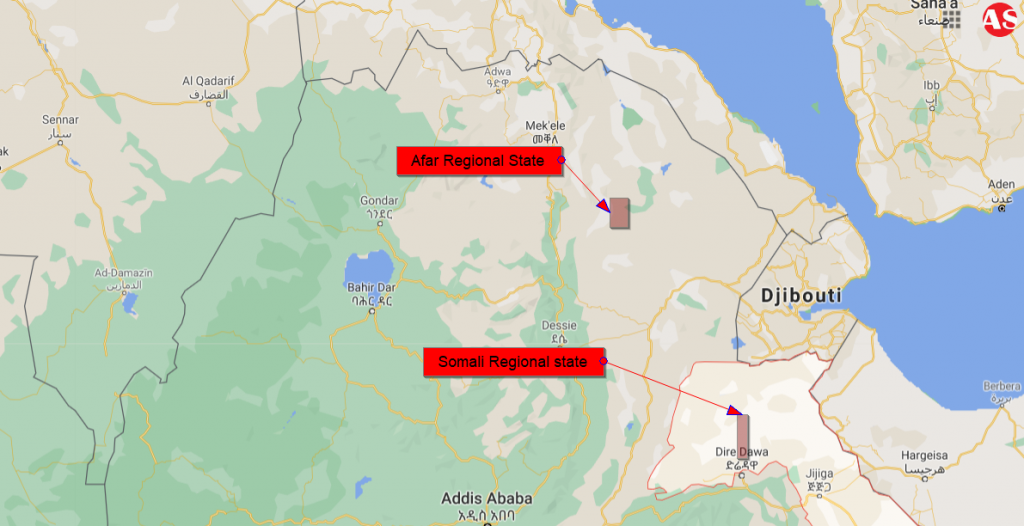 In the last week of October this year, two separate attacks on two separate occasions in the Afar Regional State have left several civilians dead and injured. Among those who were killed on Oct 28 were two staff members of the federal ministry of education in an attack which was blamed on an unknown armed group by both the Afar regional state and the federal ministry of education. At least 27 people were killed in deadlier attack announced the next day on October 29 by the Somali regional state communication affairs bureau in what the bureau said was a clash in the border between Afar and Somali regional states in the days preceding the the announcement.

Exactly a year before that in October 2019, instances another killing of civilians along the border between the two regional state in which at last 16 people were killed led to social media activists from both sides trade blames on the nature of the attacks. Somali activists blame these repeated violence on the Afar Regional Special Forces while activists from Afar region blame it on the “illegal Issa settlers aided by the Federal police”.

Now accusations and counter accusations have morphed in to both regional state who traded blames for a violence on Sunday December 27 which killed scores of civilians which both region didn’t reveal in details.

Describing instances of infiltration by unknown forces the statement further said, “It is a fact that destructive forces have infiltrated the border kebeles of the Somali region and are responsible for the massacre of innocent Somali civilians,” and used words such as “Genocide” to describe the killings. “While any crime against humanity or property is considered a crime, genocide is the worst crime of all time,” the statement said without describing the nature of the weekend deadly violence. “Any physical or psychological harm, including discrimination and killing based on language, race, or similar factors, is a major manifestation of genocide.”

Somali regional state claimed it exerted several attempts by its administration to reach at a peaceful solution to the recurrent conflict through discussions with different stakeholders were to no avail. “Our repeated efforts have proved not fruitful.”

Today the Afar Regional State released a statement of its own on its Facebook page, a copy of which was sent to Addis standard by Ahmed Koloyta, the Afar Regional Communication Office Head. While admitting the killings, the nature of which it too didn’t explain, the statement from Afara region accused Somali regional state of “declaring an open war” on the region.

“Earlier yesterday [December 27] at 5:00 Am in the morning a familiar terrorist attack took place in Zone three, Gewane Woreda, Firitli and Refo kebeles” the statement said and expressed condolences for the people who “were killed on both sides.”

“The attack was carried out by an organized Issa group,” the statement said and further accused the Somali Regional Administration of using inflammatory statements aimed at intensifying the conflict and evading responsibility. “While we are all autonomous regional states under the sovereignty of one nation, the Somali regional state has continued to declare war. They are releasing these statements in order to cover up for criminals.”

The Afar Regional State administration also asked the Somali regional state, “to withdraw its Special Forces from Afari territories and abstain from covering up for anti-peace forces.”

The Afar region also dismissed reports that suggested the involvement of its Special Forces in the border conflict calling it “False” while highlighting the role of the Afar Regional Special Forces in the ongoing “Law enforcement Operation” in Tigray Regional State. It also accused the Somali Regional Administration of fostering anti-peace elements while urging at the same time that “We would like for us to work together to strengthen unity.”

While Both statements offer little explanation on the nature of the attacks over the weekend and authorities in both regions refrained from answering questions the statements from both regional administrations blamed external “anti-peace destructive forces” for the repeated violence which continued to claim civilians lives.