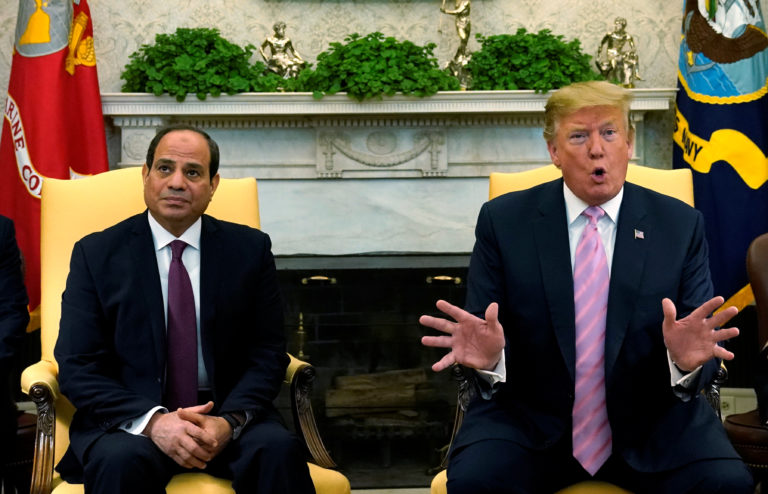 Last week President Trump invited reporters to listen in on a call intended to celebrate the normalization of relations between Sudan and Israel, a diplomatic achievement that comes with more than a few complications. During the course of the conversation with the Sudanese and Israeli prime ministers, the president of the United States took it upon himself to casually issue a bellicose threat to Ethiopia on behalf of Egypt and its president, Abdel Fattah al-Sisi, a man Trump has referred to as “my favorite dictator.”

Seemingly miffed by the failure of his administration’s clumsy effort to broker a deal on the use of Nile waters now that Ethiopia’s Grand Renaissance Dam has become a reality, Trump posited that Egypt “will end up blowing up the dam. . . . they’ll blow up that dam. And they have to do something.. . . They should have stopped it long before it was started.” He also reiterated that he is holding up U.S. assistance to Ethiopia to pressure its government to agree to his administration’s preferred deal.

The notion of casually inciting war in the strategically important Horn of Africa is sickening. The idea that the United States can successfully bully Ethiopia into a deal is ahistorical nonsense—a misreading of the stakes for Addis Ababa and an insult noted throughout the continent. But worse, the president is apparently completely oblivious to the United States’ own interests. The United States doesn’t provide assistance to Ethiopia out of sheer altruism; rather, officials from both parties have long recognized that a stable and successful Ethiopia is critical to the security of the region and an important part of any vision for cooperative, mutually beneficial U.S.-African relations in the future.

The president’s appallingly careless statement is only the most recent example of the Trump Administration’s unforced errors in Africa. While Administration officials charge around warning Africans about the danger of doing business with China, they ignore the damage they’ve been doing to the United States’ credibility and desirability as a partner. Just as youthful African societies are mobilizing to demand more accountable governance and more of a say in shaping their own futures, the United States is making the worst possible case for itself. The current administration gives the impression that it disregards African interests in the foreign policy issues that directly affect them and that it imagines Africans as supplicants desperate for external patrons.

If President Trump is re-elected, it is difficult to imagine a change of course. But a Biden Administration would also face the immediate consequences of the damage done by the Trump years. Getting the United States on the firm footing required to meet a more assertive, transforming Africa, finding common ground, and advancing U.S. policy will be a real challenge, and it will need to be addressed immediately.

Unfortunately, history suggests that this might be difficult. New presidential administrations have struggled to get their Africa teams in place quickly. Most egregiously, President Trump’s assistant secretary of state for African affairs, Tibor Nagy, didn’t take office until July of 2018, a year and a half after Trump was inaugurated. A new U.S. administration will have to move fast with a trusted and empowered team and a clear vision that rejects both business-as-usual and retrograde paradigms. Africa is poised to play a more significant role on the global stage. For the United States to meet the moment, policymakers will first have to climb out of the hole dug by President Trump.