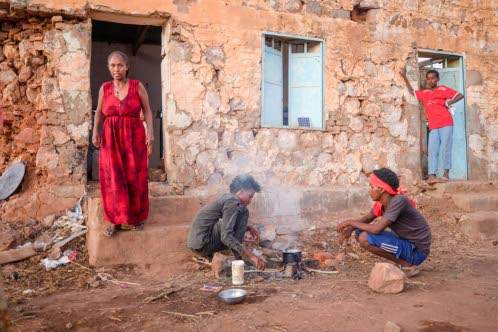 Tigrayans who fled the conflict in Ethiopia’s Tigray region, start wood fires to prepare dinner, in front of their temporary shelters at Umm Rakouba refugee camp in Qadarif, eastern Sudan, on Monday.

WASHINGTON, DC, United States (AFP) – The United States said yesterday it was no longer blocking aid to Ethiopia over its controversial mega dam but voiced hope for a diplomatic solution involving Egypt and Sudan.

The Administration of President Donald Trump, a steadfast ally of Egypt’s leader, in September suspended around US$272 million to Ethiopia, accusing it of intransigence as US-brokered talks on the Grand Ethiopian Renaissance Dam broke down.

President Joe Biden’s Administration is conducting a policy review on the project, which Egypt and Sudan consider an existential threat, but said it was no longer leveraging aid.

“The United States has decided to delink its temporary pause on certain assistance to Ethiopia from the United States policy on the Grand Ethiopian Renaissance Dam, or GERD,” State Department spokesman Ned Price told reporters.

“We continue to support collaborative and constructive efforts by Ethiopia, Egypt and Sudan to reach an agreement on the GERD,” he said.

Price said that a resumption of assistance would be tied to unspecified other factors but that humanitarian aid would be exempt.

Both the Biden and Trump administrations have voiced alarm over the humanitarian situation in the northern Tigray region where Prime Minister Abiy Ahmed in November launched an offensive in response to an attack on federal army camps blamed on the local ruling party.