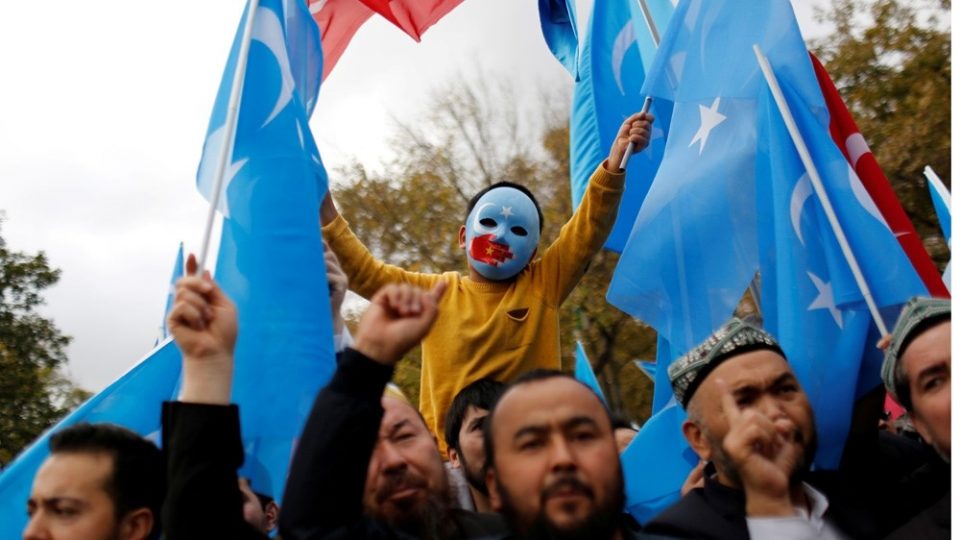 Evidence of China’s genocide against the Uighurs is now undeniable. With all other paths to justice foreclosed, national governments must speak up for the victims, write Irwin Cotler and Yonah Diamond.
The Uighur community in Turkey protests the visit of China’s foreign minister, Istanbul [Getty]

Absent a competent international body, state parties to the 1948 United Nations Genocide Convention have a responsibility to prevent and hold China accountable for this crime of crimes, securing justice for the victims and ending impunity for the violators.

The Genocide Convention defines genocide as any one of five acts “committed with intent to destroy, in whole or in part, a [protected group], as such.” In addition to killing, these acts include causing serious bodily or mental harm, deliberately inflicting conditions of life calculated to bring about the group’s physical destruction in whole or in part, imposing birth-prevention measures, or forcibly transferring children of the group to another group.

China has committed every one of these acts in its state-orchestrated campaign against the Uighurs – most of them on a systematic and widespread basis. As a result of the mass internment and imprisonment on catchall charges such as being “untrustworthy,” a large number of Uighurs have died in detention. The Chinese government does not even spare lifelong Uighur members of the Communist Party of China (CPC) or intellectuals whom it praised in the past, thus debunking any notion that their detention is about re-education or instilling loyalty to the regime in Beijing.

Uighurs suffer unlivable conditions, torture, and sexual violence inside the camps, and are subjected to institutionalised enslavement across China. Since 2017, the government has forcibly transferred Uighur children – many of them “orphaned” as a result of losing both parents to internment or forced labour – to a network of state-run facilities in Han Chinese settings.

The government is simultaneously subjecting Uighurs to systematic mass forced sterilization and coercive birth-prevention policies, destroying the group’s reproductive capacity. In 2018, 80% of all net IUD placements in China (calculated as placements minus removals) were fitted in Xinjiang, a region with 1.8% of China’s total population.

Between 2017 and 2019, the birth rate in Xinjiang declined by nearly half – the most extreme such drop anywhere since the UN began recording these statistics. More disturbing still, Xinjiang’s 2020 statistical yearbook contains no birth-rate data.

The Chinese government has eliminated Uighur education and demolished most of Xinjiang’s sacred sites. Senior officials have issued orders to “eradicate tumours,” “round up everyone,” “wipe them out completely,” and “break their lineage, break their roots, break their connections, and break their origins.”

As the Supreme Court of Canada held, incitement to genocide is a breach of the Genocide Convention in and of itself. The rhetoric of combating “extremists” is simply code for persecuting Uighurs, as China’s ruthless policies target southern Xinjiang, where Uighurs constitute about 90 percent of the population. In fact, the government publicly admitted that the sharp decline in the Uighur birth rate is directly linked to the official policy of “eradicating extremism,” which had “emancipated” Uighur women, who are “no longer baby-making machines.”

The world must view these policies in their totality, as amounting to an intent to destroy the Uighurs as a group, in whole or in part. Survivors have even recounted camp guards saying that they were acting in accordance with an immutable document from the CPC Central Committee stipulating that the policies would remain in place until Uighurs “would disappear […] until all Muslim nationalities would be extinct.”

The mounting evidence supporting the genocide determination is not limited to highly detailed firsthand accounts. It also consists of satellite imagery of over 380 Xinjiang detention sites newly built or expanded since 2017, including forced labour factories covering over 21 million square feet (195.1 hectares). Other satellite images track the destruction of and damage to the majority of Xinjiang’s sacred sites, including 16,000 mosques.

“China has denied foreign observers unfettered access to Xinjiang for years, and is now aggressively denying the existence of any atrocities.”

Then there are the unprecedented leaks of Chinese government documents, containing the mass-internment blueprint, records of mass detention and forced labour transfers, and other high-level directives. The fact that high-ranking officials risked their lives to disclose these classified documents indicates how severe the atrocities have become. Countless others have testified at extreme risk to themselves and their families to record their accounts with the Xinjiang Victims Database, which is expanding by the day.

The only international courts that can hear genocide cases – the International Court of Justice and the International Criminal Court – cannot realistically exercise jurisdiction anytime soon. China does not recognise the ICJ’s authority over questions of genocide and is not a party to the ICC. Moreover, as a permanent member of the UN Security Council, China can block any attempt at an ICC referral.

While a UN fact-finding mission may fill this impunity gap, China has denied foreign observers unfettered access to Xinjiang for years, and is now aggressively denying the existence of any atrocities. Over the last year, it has expelled foreign journalists, scrubbed the internet of evidence, sanctioned and smeared parliamentarians and experts, and lectured other countries on mass atrocities and genocide. China’s Foreign Ministry even called camp survivors of rape and forced sterilisation “actresses,” and questioned their character.

In March, following an independent examination of the situation in Xinjiang, more than 50 experts on international law, genocide, and the region agreed that the Chinese state’s atrocities rise to the level of genocide. With all other paths to justice foreclosed, the responsibility falls on national governments to speak up for the victims and fulfill their obligations under the 1948 Convention to prevent and end complicity in the genocide.

Indian Woman Declared Dead is Back Home After Her Funeral