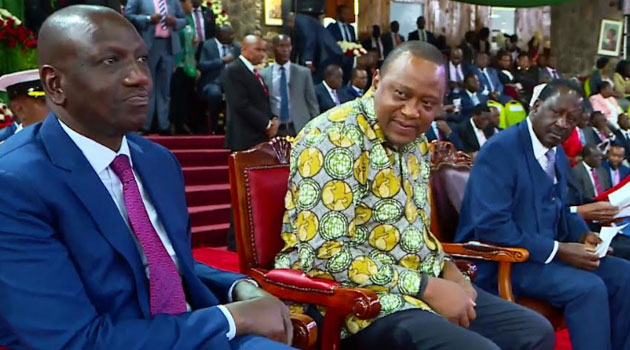 (KDRTV) – President Uhuru Kenyatta is planning to appoint a new Vice President through an Executive Order, several sources have claimed.

The plans are so advanced that they could be made public as early as next week, our sources said.

KDRTV understands that Uhuru will make an all powerful Cabinet Administrative Secretary (CAS) with the title of Vice President. The appointee will operate from State House Kenya.

The new revelation comes at a time when the relationship between Uhuru and his Deputy William Ruto is at an all time low.

Ruto missed Thursday’s meeting at State House with his office claiming that he had not been invited .

Last week, Uhuru publicly dared the DP to resign instead of clashing with other government officials.

Ruto fired back at the President, warning that he would not resign as his position is constitutional.

Since 2019, Uhuru has systematically removed Ruto allies from senior positions in government.

It all started with the firing of Rashid Echesa, Henry Rotich and Mwangi Kiunjuri from Cabinet.

Any move to appoint a Vice President will shake the political environment and may plunge the country into unprecedented waters.