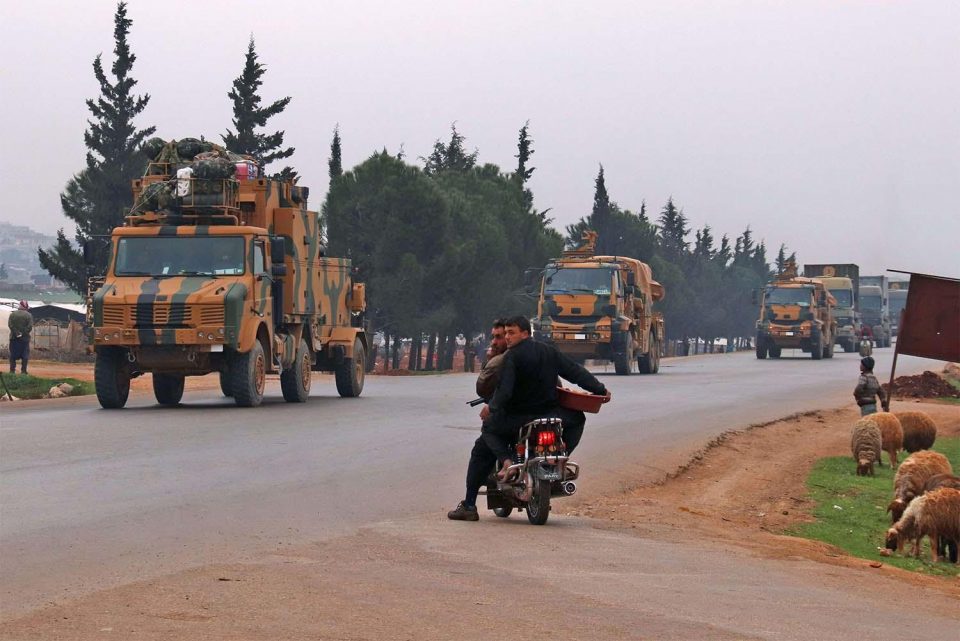 There is little sign that Moscow is willing to accommodate Turkish calls for a ceasefire and a no-fly zone, says Thomas Seibert.
Monday 02/03/2020

ISTANBUL — Turkey is scrambling to find a way out of the strategic dead end that it thrust itself into in Syria with little tangible support from the West and coming near a direct confrontation with Russia.

Ankara has relied on Russia to secure core goals, such as ending Kurdish self-rule in northern Syria, but finds itself in a deadly showdown with Russia-backed forces of Syrian President Bashar Assad in Idlib province. There is little sign that Moscow is willing to accommodate Turkish calls for a ceasefire and a no-fly zone.

Moscow controls the airspace over Idlib, denying Turkish and anti-Assad rebels in the province much-needed air support. Russian President Vladimir Putin cooperated with Turkey in Syria in recent years but is now apparently keen to end the war with a victory by Assad in Idlib, the last rebel stronghold, which would seal a major foreign policy triumph for Russia.

Shocked by the death of more than 50 of its soldiers in Idlib in less than a month, Turkey turned to Europe and the United States for help.

Washington, clearly not interested in getting directly involved in the conflict, signalled its readiness instead to drive a wedge between Turkey and Russia and to extract concessions from Ankara. US Ambassador to NATO Kay Bailey Hutchison said: “I hope that President Erdogan will see that we are the ally of their past and their future and they need to drop the S-400.”

Following a telephone call between US President Donald Trump and Turkish President Recep Tayyip Erdogan, US Secretary of State Mike Pompeo said Washington was “reviewing options to assist Turkey against this aggression as we seek to prevent further Assad regime and Russian brutality and alleviate the humanitarian suffering in Idlib.”

However, a US State Department official explained that Washington was looking urgently to support Ankara in Idlib with information-sharing and equipment. Any assistance would not involve military action by American units.

NATO’s support remains limited. Asli Aydintasbas, a senior fellow with the European Council on Foreign Relations, said the alliance might offer Ankara “plenty of moral support” but “no one wants to get militarily entangled with Russia.” This, she added, meant that “Erdogan will have to fix this with Putin.”

In a move showing its low expectations from Europe, Turkey threatened to go back on a deal with the European Union and open the floodgates of refugees.

Ankara is looking for ways to deal with the critical fracture with Russia over the endgame. Burhanettin Duran, a member of Erdogan’s foreign policy advisory council, said Russia appeared no longer interested in working with Turkey in Idlib or other regions in northern Syria occupied by Turkey.

“Moscow’s escalation suggests that it does not want Turkey to play a role in Syria’s political transition,” Duran wrote in a column for the pro-government Daily Sabah newspaper. “It seems that Russia wants a withdrawal of Turkish troops from the remaining safe zones that Ankara liberated from terrorist groups.”

Turkish officials blamed Syrian forces — and not Russian fighter jets — for the death of Turkish soldiers. Despite belligerent rhetoric from Ankara, there was no sign that Assad’s troops were withdrawing from Idlib after Erdogan warned of major military action by Turkey after he set a deadline of February 29 for such a Syrian forces retreat.

In a nod to Russia’s key role in Syria, Erdogan consulted with Putin by phone and agreed to travel to Moscow in the coming days.

Fighting in Idlib continued to inflict losses on Turkey. Another Turkish soldier was killed and two were wounded in shelling by Syrian government forces, the Turkish Defence Ministry said.

“It is becoming clear that Turkey cannot save itself from this self-inflicted crisis in Syria,” Huseyin Cicek, a political scientist and expert on religion and politics at the Department of Islamic-Theological Studies at Austria’s Vienna University, said by e-mail. “Even though Russia has been targeting Turkish troops and its partners, Turkey is going out of its way not to provoke Russia too much.

Thomas Seibert is an Arab Weekly contributor in Istanbul.

The article is originally published in Middle East Online