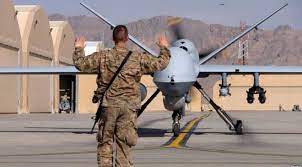 Jonathan Fenton-Harvey
Renewed drone strikes under the Biden administration have raised questions about the future direction of US foreign policy in Somalia.

While it initially appeared that US President Joe Biden had intended to continue scaling back Washington’s decades-long military involvement in Somalia, his administration has conducted multiple airstrikes on the Somalia-based Al-Shabab group since 21 July.

Although Al-Shabab is weaker than it once was, the Somali army has continued operations against the Al-Qaeda offshoot this year, as it still poses a threat to the country’s stability despite years of counterterrorism campaigns. This follows former US president Donald Trump’s decision to fully withdraw US troops from Somalia in January.

Alongside the airstrikes, the Biden administration announced it would deploy special operation forces to Kenya, which would join forces with the country’s own forces in its battle with the Al-Qaeda affiliate.

“While Biden initially intended to continue scaling back Washington’s decades-long military involvement in Somalia, his administration has conducted multiple airstrikes on Al-Shabab since July”

Since 1992, the US has largely been involved in both a ground and air war in the country, after the country descended into civil war following the collapse of Siad Barre’s regime in 1991. Yet in the long-term, this has not delivered the necessary improvements to Somalia’s stability.

After all, Al-Shabab was able to emerge in 2006 and conduct major insurgencies within Somalia and surrounding countries. Washington designated the faction as a terrorist organisation in 2008 and has sought to degrade the group with an air campaign.

There have been some successes in dislodging Al-Shabab’s control. A US and African Union-backed intervention by Ethiopia in 2006, at the Somali government’s request, helped push the faction away from the Somali capital Mogadishu.

However, it has been argued that such interventions had further radicalised Al-Shabab and made it adopt a more hard-line position against Ethiopia and the US. The faction has still been able to carry out horrific terrorist attacks against Somali civilian areas in recent years.

Amid Biden’s U-turn on Somalia, there have been concerns over the legality of continued US intervention. Although Washington invoked the 2001 Authorization for the Use of Military Force against the terrorist groups that attacked the United States on 9/11, some leading Democrats claimed that recent airstrikes were “unconstitutional.”

Figures like Senator Ben Cardin, a senior member of the Senate Foreign Relations Committee, argued that the Biden administration’s move was inconsistent with the sentiment within the US congress.

“I think President [Joe] Biden should submit a new authorization for the use of military force and should recognize that the 2001 AUMF should be terminated,” Cardin added.

After all, Washington’s approach to Somalia, though operating on a counter-terrorism premise, has caused local damage, including civilian deaths. Amnesty International has previously said that US airstrikes could therefore be a breach of international humanitarian law.

“Although the US has been involved in the country militarily, little effort has been made to ensure that a strong police force and national army is established”

Speaking of the past impact of US airstrikes on Al-Shabab, Dr Mohammad Ibrahim Shire, lecturer at the University of Portsmouth, told The New Arab that there is evidence that military efforts had initially diminished the group’s freedom of movement and territorial control. Indeed, this has enabled the Somali government to expand its influence in the country, he added.

“However, Al-Shabab is quite a resilient movement that has succeeded at times in finding new modes of operation or shifting to some of their other violent tactics, such as IED and grenade attacks. So, while airstrikes have limited the militant group’s movement, it hasn’t fully degraded its operational capacity,” said Dr Shire.

The alarming events in Afghanistan, with the Taliban sweeping across the country in August and capturing Kabul, provide a stark reminder of the consequences of Washington failing to establish a lasting security apparatus while largely focusing on counterterrorism.

There were concerns over the US withdrawal from Somalia in January, given the long history of US interventions within the country. Although some Western diplomats downplayed the implications of the US withdrawal, some Somali civilians were fearful of the security vacuum that it would leave.

After all, Somalia has been picking up the pieces of a former failed state, and although the US has been involved in the country militarily, there have been little efforts to ensure that a strong police force and national army is established.

The Vaccinated Are Worried and Scientists Don’t Have Answers