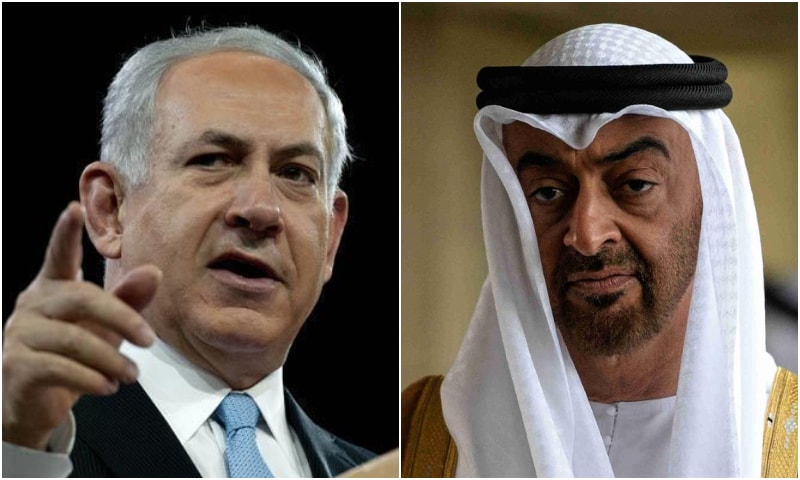 Israel will establish diplomatic relations with the United Arab Emirates and hold off on the U.S.-backed plan to annex part of the Palestinian territories, all three countries announced Thursday.

The UAE and Israel have long cooperated on countering Iranian influence, but the latest move portends more cooperation on other issues, including the growing Turkish-Qatari alliance. And it comes as U.S. President Donald Trump comes looking for a diplomatic breakthrough ahead of November’s elections.

“This historic diplomatic breakthrough will advance peace in the Middle East region and is a testament to the bold diplomacy and vision of the three leaders and the courage of the United Arab Emirates and Israel to chart a new path that will unlock the great potential in the region,” the United States, Israel, and the UAE claimed in a joint statement.

The two sides will be establishing a “Strategic Agenda for the Middle East” alongside the United States, according to the statement.

“Formalizing what has been an informal relationship is a wise move by both parties,” said International Institute for Strategic Studies fellow and former U.S. diplomat Mark Fitzpatrick. “It wins them plaudits from across the political spectrum in the U.S. and strengthens their de facto partnership vis-a-vis Iran.”

The threat of Iran has long loomed large in the UAE-Israeli relationship. Both sides opposed the 2015 nuclear deal with Iran, and both sides are currently pushing for the United Nations to impose an arms embargo on the Islamic Republic.

But the move also came just a week after Iranian and UAE foreign ministers held a rare public meeting, signaling that UAE-Iranian relations are beginning to warm.

“Why is this happening now? It has nothing to do with Iran,” said Hussein Ibish, a senior resident scholar at the Arab Gulf States Institute. “The word that would sum it up best is Turkey.”

Turkey, Israel, Qatar, and the UAE were once all part of the same pro-U.S. bloc in the Middle East.

Their relations soured during the Arab Spring, when Turkey and Qatar backed uprisings by populist movements such as the Muslim Brotherhood, while the UAE supported established regimes.

“Why the UAE and not any other Gulf country?” Ibish said. “Israel and the UAE share the same threat perception in a unique way. They agree on Iran, but then they agree on Turkey, and the Muslim Brotherhood, and Qatar.”

The UAE-Israeli deal comes as Turkey ramps up its regional efforts along several different fronts.

In recent months, Turkish forces have launched massive offensives against Kurdish militants in Syria and Iraq, intervened against the UAE-backed strongman Khalifa Haftar in Libya, backed Azerbaijan in its post-Soviet territorial dispute with Armenia, and confronted the Greek Navy in disputed waters.

Just this week, Israeli officials formally declared their support for Greece in the eastern Mediterranean dispute.

Israel, however, is not totally aligned against Qatar’s regional activities. Qatar helps finance the unrecognized Palestinian statelet in Gaza in exchange for keeping the Israeli-Gazan border quiet.

Israel’s state broadcaster reported on Wednesday that Israeli officials were asking Qatar to renew its payments to Gaza’s ruling party, Hamas, as militants began to launch explosive balloons across the border.

“Everybody needs somebody to do it,” said Ibish. “If the Hamas regime in Gaza collapsed with nothing to replace it, that’s worse for everyone.”

He said even close UAE allies like Egypt worry that groups like ISIS and Al Qaeda could fill the power vacuum.

The Israeli-UAE deal now opens space for the UAE to appear as a champion of Palestinian rights, as it has apparently suspended Israel’s plans to annex parts of the disputed West Bank.

“The UAE can boast of being the only Arab state to successfully limit Israeli expansion, even though Israel didn’t want to annex the West Bank anyway,” Fitzpatrick claimed.

Trump’s Israeli-Palestinian peace plan would have allowed Israel to annex its settlements in the Palestinian territories. Palestinian leaders denounced the plan as a sham and neighboring Jordan warned that annexation would undermine the Israeli-Jordanian peace treaty.

Israel pressed ahead, claiming that it would begin annexing territory by July 1.

But the Israeli government was bogged down by the coronavirus pandemic and the possibility of the fourth round of elections in less than two years, and July 1 passed with no announcements.

“As a result of this diplomatic breakthrough and at the request of President [Donald] Trump with the support of the United Arab Emirates, Israel will suspend declaring sovereignty over” disputed Palestinian territories “and focus its efforts now on expanding ties with other countries in the Arab and Muslim world,” according to the statement.

The statement adds that “[t]he parties will continue their efforts…to achieve a just, comprehensive and enduring resolution to the Israeli-Palestinian conflict.”

The statement still leaves the door open for annexation at a later date. Israeli prime minister Benjamin Netanyahu said that he is “still committed” to annexing the disputed territories.

Palestinian leaders were not thrilled with the Israeli-UAE deal, and the semi-autonomous Palestinian Authority referred to it as a “betrayal of Jerusalem.”

“The Palestinian Authority is very, very weak,” said Israel Policy Forum policy advisor Shira Efron. “This will probably weaken it further, because it’s a failure of its strategy.”

Normalization of relations with Arab countries had been a very strong “incentive” for Israel “to go for peace with the Palestinians,” she explained at a Wednesday video conference hosted by the Israel Policy Forum, and this leverage has now been “taken away” from the Palestinians.

The Israel Policy Forum noted in a statement attached to the event that “beginning the process of normalization with the UAE is not the same as achieving regional peace or a permanent status agreement to resolve the Israeli-Palestinian conflict.”

But the appearance of progress has already helped ingratiate Israel and the UAE with both parties in Washington—both Republicans looking to salvage the Trump peace plan, and Democrats uneasy with prior Israeli plans to annex Palestinian territory.

“We hope this provides a good foundation for building on the vision for peace that the President has laid out, and I wanted to just thank all the participants—the Emiratis, the Israelis, and all of the team on the United States side—that brought this to fruition,” Secretary of State Mike Pompeo told reporters.

“I look forward to greater collaboration between two key U.S. partners as we address common challenges and shared threats across the region,” he said in a statement.

“This is a mutually beneficial step that will strengthen both countries,” he said in a statement. “I hope that this new breakthrough will give courage to other countries to move forward toward normalization and motivate Palestinians to give peace a chance.”

South Sudan may have all the cards to mediate Ethiopia conflict