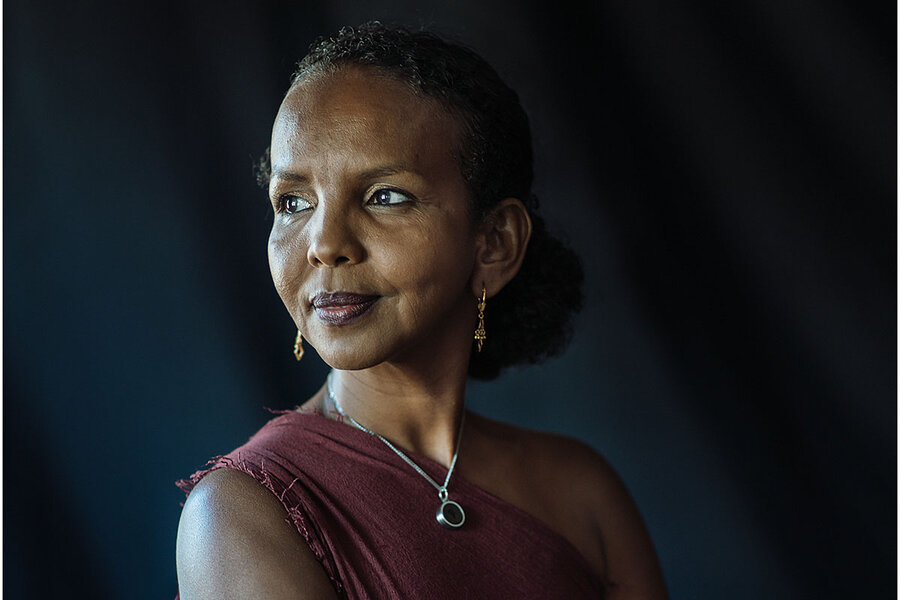 The Malian writer Amadou Hampâté Bâ famously wrote that “in Africa, when an old man dies, a library burns down.” Shugri Said Salh found herself haunted by those words. She had grown up in a nomadic community in Somalia, but she was raising her three children in California on an all-American diet of soccer practices, piano lessons, and playdates. She loved the life she had given them, but she also didn’t want them to lose track of where they had come from.

“Somalia is a nation of poets, and of people with deep resilience,” she says. Her grandmother, her ayeeyo, had raised her on fireside stories, and she wanted to be part of that tradition too.

The result is a memoir called “The Last Nomad: Coming of Age in the Somali Desert.” The book’s story sprawls across three decades and two continents, from the Somali desert where Ms. Salh herded camels with her ayeeyo to her life as a refugee in Kenya and finally her resettlement in Canada. But though Ms. Salh came to North America fleeing violence, she says she resisted writing a book that centered around running away.

Why We Wrote This

Labels can make things easier to understand – and also oversimplify them. In her memoir, Shugri Said Salh strives to paint a fuller picture of growing up in Somalia, documenting the good alongside the bad.

“Why would I want to just tell you all the sad things?” she says. “Yes, I was a refugee. But I also had a whole other life. I am not only that. I am more than that. I am a big story.”

Ms. Salh spoke with the Monitor about her childhood, and about the need for stories that complicate the way we see countries like hers.

Why do you think it’s important for people in the West to understand the way you grew up?

I am an infusion nurse. I worked endless hours during COVID, and spent a lot of time talking to my patients. And it made me realize, we are more connected than we think. I have seen that by sharing my story, by hearing my story, people have more compassion for my background, and don’t just write me off as a terrorist or a pirate. I liked to say to my patients, I didn’t read Jeffrey Dahmer’s story and said wow that’s what Americans are. Like everybody, we have the good and the bad. And I think the book helps to show that.

Also, I love to read, and I love when books transform me, when they take me out of my own life and teach me something. So perhaps if you are like me, if you are a curious person always in pursuit of something beautiful and enchanting and different from what you know, perhaps we can sit and gather by the fire and talk.

Somalia has a deep history of storytelling. It’s often called a country of poets. Can you talk a little bit about the role that stories played in your life growing up?

I came from a woman who instilled in me a deep reverence for my culture. She was this regal woman. Six feet tall. My ayeeyo was a poet, a warrior, and an activist. And despite being constantly in pursuit of green land and water, despite working every day just to survive, she and my other elders sat us down each night to tell us stories.

I remember this beauty of it. Sitting by the fire in a black night. The fire is crackling. The sky is black and covered in stars. You hear hyenas in the distance, but you aren’t afraid because you are with people who know how to live on the land and with the land. And so I could sit without fear and just listen and take in all these beautiful stories.

In your book, women live very complicated lives. They’re often both subjugated and strong, navigating expectations and stereotypes while finding ways to make space for themselves. What kind of portrait were you trying to give of Somali women in this book?

I often tell people Somali women are a unique kind of woman. We are Muslim women. We are nomads. We are city women. We are many things. And above all, we don’t put up with [anything].

I think often of my nomadic grandmother and how in her own ways, she was an activist. She took on roles that were not usually done by women, like herding and taming camels. And she was a poet who wasn’t afraid to speak her mind about the men in her community in the poems she wrote. And my sister Abshiro – she is the one who got me out of Somalia at great personal risk. I am really who I am because of these women I was raised by, and their strength.

Your book speaks very movingly of your experience of female genital mutilation. What made you want to tell that very personal story?

A lot of people, when they write about hard things that have happened to them, are entrenched in their own victimhood, in what was done to them. I wanted to tell my story a little differently. I wanted say, “I’m here to give you insight into this world, and I want to give you compassion for it too, because you cannot change people unless you understand them.” That’s the way I will unshackle my daughters, all our daughters.

You see, in my culture to be circumcised was an act of love. In our clan system, marriage connects families in a deep way, and ensuring a woman’s virginity is important to that tradition. So my grandmother knew that if we weren’t circumcised, people would pity us. They would say, did no one love you enough to look after you? I know it’s hard to understand that part of the story – but at the time I would have been [devastated] if it hadn’t been done to me. So I want to say to readers, don’t paint us with a single brush because we went through something like this. We are not only victims. Our culture is not only barbaric, and not only noble. I went through that, but I’m also a soccer mom, a Californian who’s a bit of a hippie. There is no single story about my life.

This is a story about your life as a refugee, but being a refugee occupies only a small place in the narrative, towards the end. Why was it important for you to tell a story that didn’t center around fleeing?

I have seen that when African American stories are being told in this country, it’s often about slavery. It’s about pain. That’s important, but I didn’t want people to feel there is nothing to me but tears. There’s a deep resilience that lives in me. I am OK. There was violence. But I also had a whole other life. And that’s why my book takes you through the times when Somalia was safe. I want you to see that I had crushes on boys. That I fell in love. That there was this one male camel in our herd who wouldn’t leave me alone. My life has so many stories, and not all of them are about the bad things that happened to me.

Throughout the book, you see me protesting in a small whisper against the bad in my society. I want to make you think, I want to make you question. No one in my story is crying, no one is begging for mercy from people outside. We are just asking you to think critically about why the world is the way it is.

US does have troops in Somalia and Yemen, contrary to Psaki and Sullivan