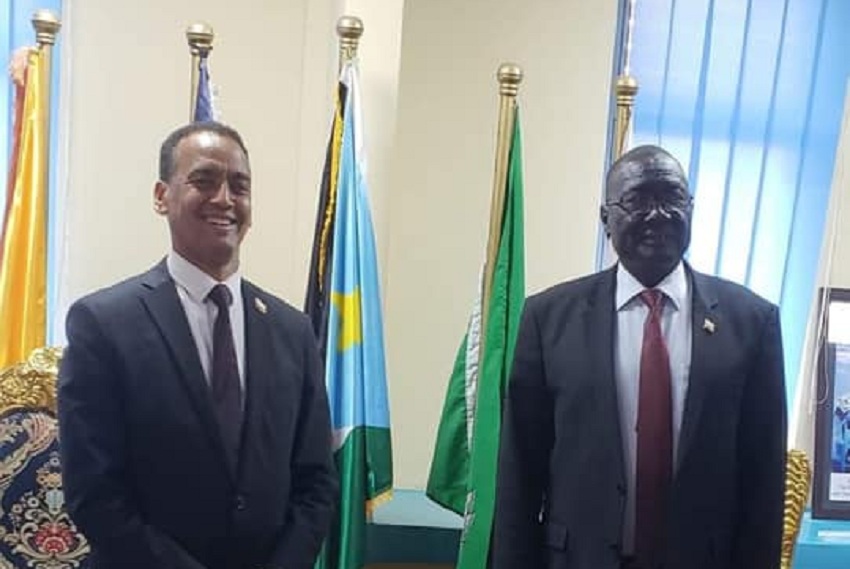 “Tigray issue is an internal Ethiopian issue and stressed that invisible hands try to use this group as an agent in exacerbating the instabilities in the Horn of Africa region.”

JUBA – South Sudan’s government has accused what it calls invisible hands of using the Tigray People’s Liberation Front (TPLF) to destabilize Ethiopia and has vowed to prevent at all costs the world’s youngest country from being used as launching pad for attacks against Ethiopia, the EthiopIn a meeting with Akec,

AIn a meeting with Akec ,ammbassador Nebil Mahdi said he congratulated South Sudan on behalf of Ethiopia on the occasion of the formation of the reconstituted transitional national legislature and stressed the strong relations between South Sudan and Ethiopia are historical.

“At the occasion, the ambassador noted that the people of the two countries have deep rooted historical ties which extend beyond regimes and personalities. Ambassador Nebil briefed the Minister about the major reforms that Ethiopian government went through, and explained to him that though every effort was exerted to make the TPLF part of the reform team, the group rejected all the pleas and continued to engage in masterminding and orchestrating every destabilizing activity and eventually attacked ENDF command stationed in Tigray region,” the Ethiopian foreign ministry said in a statement.

The statement added that the Ethiopian envoy “informed the Minister about TPLF’s usual provocations by invading the Afar and Amhara regional states thereby displacing hundreds of thousands of people, massacring civilians and destroying public infrastructures etc. The ambassador also mentioned the statement of the USAID office in Ethiopia that its warehouses of humanitarian aid supposed to be distributed for the needy have been looted by the TPLF terrorist group.”

It added that the ambassador “also briefed the Minister on the tripartite talks over the Grand Ethiopian Renaissance Dam (GERD) and Ethiopia’s position of using the water equitably and without causing significant harm to other riparian states.”

For his part, South Sudan’s Akec “alluded to the considerable support Ethiopia provided to the cause of the South Sudanese people, and pointed out that the relationship between Ethiopia and South Sudan is based on strong cultural and historical values of the people of both countries.”

The senior South Sudan government official also said “the TPLF used to claim to be progressive while it was in power, but it was unfortunate that the group proved to be localist and separatist. He said that the Tigray issue is an internal Ethiopian issue and stressed that invisible hands try to use this group as an agent in exacerbating the instabilities in the Horn of Africa region and this need to be addressed diplomatically through regional platforms.”