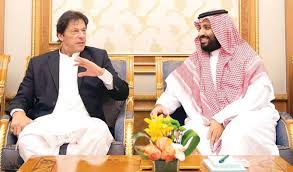 Saudi Arabia has ended a loan and oil supply to Pakistan due to the South Asian nation’s criticism that the Saudi-led Organisation of Islamic Cooperation (OIC) is not doing enough to pressure India on the Kashmir issue, marking a new milestone in the deteriorating relations between the two allies.

Pakistan was last week forced to repay a Saudi loan of $1 billion that the kingdom called in after Pakistan insisted it be allowed to lead the OIC’s support for Kashmir, a region largely under Indian occupation and which was annexed by India last year.

The loan was part of a $6.2 billion package announced by Saudi Arabia in November 2018, which included a total of $3 billion in loans and an oil credit facility amounting to $3.2 billion. Those deals were then signed when Crown Prince Muhammed Bin Salman made a visit to Pakistan in February last year.

He went further by warning that Pakistan would be forced to take it into its own hands, saying that “If you cannot convene it, then I’ll be compelled to ask Prime Minister Imran Khan to call a meeting of the Islamic countries that are ready to stand with us on the issue of Kashmir and support the oppressed Kashmiris.”

Qureshi insisted that the OIC, dominated largely by Saudi Arabia and the Gulf Arab states, must “show leadership on the issue.” He added that “We have our own sensitivities. You have to realise this. Gulf countries should understand this.”

The foreign minister made the comments despite risking his country’s ties with the kingdom, acknowledging that “It’s right, I’m taking a position despite our good ties with Saudi Arabia…We cannot stay silent anymore on the sufferings of the Kashmiris.”

Saudi Arabia and Pakistan have historically had strong bilateral relations in the financial, trade and military sectors, making the increased tensions between the two countries a concern for many and particularly for Pakistan, which has been undergoing a financial crisis over the past few years and which saw the kingdom as a primary ally to help bail it out.

This is not the first time such tension was witnessed, though, as Pakistan was pressured by Saudi Arabia to skip the attendance of a major summit on the issues facing the Muslim world in the Malaysian capital Kuala Lumpur in December last year due to the presence of the kingdom’s rivals, Iran and Turkey. Pakistan’s lack of attendance, seen as a challenge to Saudi Arabia’s influence in the Muslim world, caused many to see Islamabad as being subservient to Riyadh.