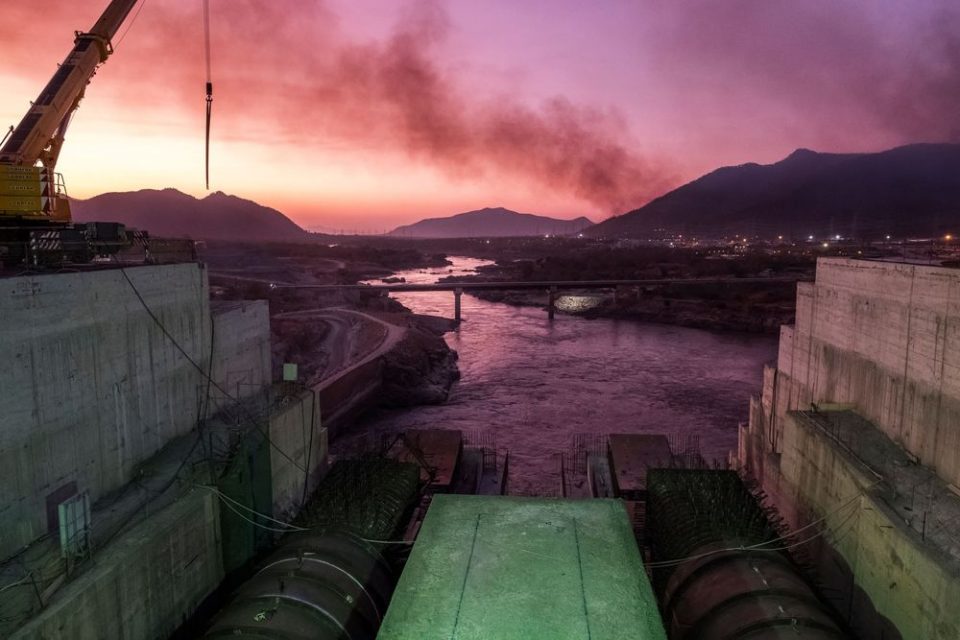 A general view of the Blue Nile river as it passes through the Grand Ethiopian Renaissance Dam (GERD), near Guba in Ethiopia, on December 26, 2019. Photographer: Eduardo Soteras/Getty Images
Politics

Photos from space add to concerns that Africa’s biggest hydro project could choke off water flowing down the Nile River.

The photos from Planet Labs Inc. show runoff from rains collected in front of Ethiopia’s Great Renaissance Dam after negotiations over water management broke down with Egypt and Sudan, two downstream countries that rely on Nile River irrigation. The government in Addis Ababa said the images don’t indicate any formal decision to begin filling the reservoir, an effort that will take more than a decade to complete.

Egypt has said it wants further negotiations to address its concerns. The dam is the world’s seventh largest. It will supply Ethiopia, which is east Africa’s second-biggest economy, with the power equivalent to six nuclear reactors once its turbines begin churning. The $5 billion megaproject, partly financed by China, is being built to feed power demand in Ethiopia’s 110 million-person economy.

Ethiopia’s Water, Irrigation and Energy Minister Seleshi Bekele had to roll back reports by a state-owned broadcaster on Wednesday that suggested the government had formally authorized the reservoir to be filled. The rising waters simply reflect that the volume of rainwater exceeds the throughput of the structure. Levels haven’t risen high enough to breech spillways on the dam, which the satellite photos show is still under construction.

“From the climate side, there is evidence to believe that the dam is impounding water during the Monsoon and possibly due to heavy rainfall events over the region,” said Yoshihide Wada, a water-security researcher at the International Institute for Applied Systems Analysis outside of Vienna.

This isn’t the first time that waters abutting the project have risen. In October, European Space Agency satellite images show similar flooding that raised levels.  Tensions around that time triggered meetings between Ethiopian Prime Minister Abiy Ahmed and Egyptian President Abdel-Fattah El-Sisi on the sidelines of a Russia-Africa summit.

The conflicting reports and sporadic responses by the governments show just how sensitive the issue is, with authorities walking a tight rope between asserting rights and exercising restraint. In the 1970s, Egypt’s then-leader Anwar Sadat threatened war if the dam was built. Today’s government, though, has been far less belligerent and has pledged to resolve the dispute diplomatically.

Sudan’s Foreign Ministry said Thursday it had received assurances from Ethiopia that it had not begun to fill a mega-dam whose construction has raised tensions in the region.

Ethiopia also stressed its commitment to African Union-backed negotiations over the Renaissance Dam project, the ministry said in a statement.

“Satellite imagery is putting more information in the public domain and pushing for increased transparency between upstream and downstream stakeholders,” said Mathis Rogner, a hydropower researcher at Germany’s Agora Energiewende who assessed the images. It probably won’t be possible to make a definitive conclusion based on remote sensing until after the rainy season is over, he said.