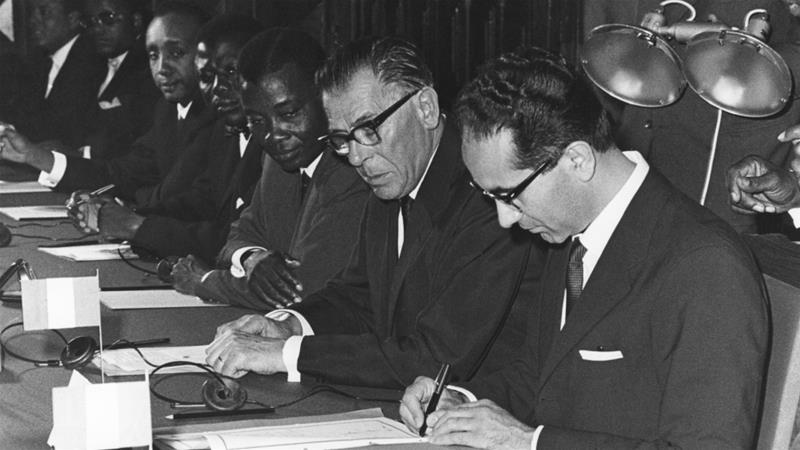 Independence did not decolonise African countries and did not put an end to European exploitation.

On November 22, the deadline by which the United Kingdom was supposed to return the occupied Chagos Islands to the African island nation of Mauritius passed. Six months earlier, the United Nations General Assembly had voted overwhelmingly in favour of the reunification, which came on the tail of the International Court of Justice ruling that British control over the islands is unlawful.

London’s refusal to abide by the ruling and the UN resolution prompted immediate reaction and accusations of colonial occupation. The African Union demanded “a complete decolonisation” of the islands.

The dispute is all the more significant as it falls just days after the 135th anniversary of the Berlin Conference, at which European powers agreed the rules by which they would parcel out Africa among themselves.

The AU‘s demand is a bit curious, linking as it does a British withdrawal with “decolonisation”. But there is a little more to it than that. In fact, although many on the continent have tended to equate decolonisation with the dawn of independence in the 1960s, independence, in fact, turned out to be a bit of a hoax.

While it undoubtedly improved life for some on the continent, for the most part, it did not mean freedom. Rather, it marked the internationalisation and indigenisation of colonialism. It was to become a tool to transform Africans from being the objects of colonial subjugation into partners in their own exploitation.

This is neatly illustrated by the now largely forgotten Eurafrica project. Conceived in the interwar years, it was a plan to replace European colonial competition for Africa’s resources with an internationalised colonialism that would allow Europeans to jointly exploit the continent under the auspices of what became the European Union.

As European scholars Peo Hansen and Stefan Jonsson of Linkoping University in Sweden have noted, “the EU (or the European Economic Community, EEC, as it was called at its foundation) was from the outset designed, among other things, to enable a rational, co-European colonial management of the African continent”.

As the Chinese do today, in the years following the end of World War II, many in Europe saw in Africa the resources and markets they required to rebuild their shattered economies and to join the United States and the USSR as a third superpower. Africa and its resources thus featured prominently in discussions over the creation of pan-European institutions.

The Rome Treaty, which established the EEC in 1957, was nothing short of a resurrection of the Berlin Conference’s General Act, which 73 years earlier had sought to create an internationalised regime of free trade stretching across the middle of Africa.

In Rome, six European countries, without the involvement of any Africans, promised each other equal access to trading and investment opportunities in what is today the territory of 21 African countries: Senegal, Mali, Guinea, Ivory Coast, Benin, Mauritania, Niger, Burkina Faso, the Republic of the Congo (Congo Brazzaville), the Central Africa Republic, Chad, Gabon, the Comoros, Madagascar, Djibouti, Togo, Cameroon, the Democratic Republic of the Congo (DRC), Rwanda, Burundi and Somalia. In fact, as noted by Hansen and Jonsson, three-quarters of the territory covered by the EEC actually lay outside continental Europe.

Although the British did not join the first EEC treaty, they had similar ambitions for retaining control of their colonies. In 1947, the British Chancellor of the Exchequer, Stafford Cripps, declared that “in Africa indeed is to be found a great potential for new strength and vigour in the Western European economy”.

A decade later, in the same year the EEC was set up, British Prime Minister Harold Macmillan commissioned a cabinet committee report on the effect of African independence on “the prestige and influence of the UK” and whether “premature withdrawal of United Kingdom jurisdiction would leave a vacuum which would be filled by a country hostile to the United Kingdom and her Allies”.

It was into this context that the countries of Africa were born. Congenitally misshapen, they were easy prey for Europe. The Eurafrica project was simply given a makeover as the 1963 Yaounde Convention signed between the EEC and 18 former French and Belgian colonies. Under the agreement, the Europeans allowed free access to their domestic markets to products from the African members, while the latter were, at least initially, permitted to impose restrictions on the entry of European goods into their territories in order to protect their own infant industries.

Three years earlier, however, the UN Economic Commission for Africa had warned, as related by Hansen and Jonsson, that the arrangements were likely to lead to economic dependency by tempting the Africans “to prefer the short-run advantage of tariff concessions [in EEC markets] to the long-run gains of industrial development”. This is because the Europeans were unlikely to keep their markets open if the Africans actually decided to lock out EEC goods.

Sadly, the advice fell on deaf ears – not surprisingly, though, when one remembers how independence was procured. It came in on the wings of African nationalism – which Prime Minister Macmillan famously referred to as the “wind of change” in a 1960 speech to both houses of the South African Parliament.

Further, as described by the late Kenyan professor, Ali Mazrui, “African nationalism seeks to achieve and to maintain equality with Europe.” Eurafrica gave African elites the opportunity to prance around the international stage pretending to be the equals of the colonial masters whose bidding they were doing.

By 1962, an American observer in Paris, Schofield Coryell, declared that African countries remained “essentially what they were: agricultural appendages to Europe”. If this sounds familiar, it is because African elites are, to borrow from Wole Soyinka, still heading to foreign capitals to loudly proclaim their tigritude, while consigning their countrymen into debt and bondage.

Another famous poet, Leopold Senghor, the first president of independent Senegal, recognised that decolonisation was more than simply independence. Writing in Le Monde in 1957 he declared: “By decolonisation, I mean the abolition of all prejudice, of any superiority complex in the minds of the coloniser, and also of any inferiority complex in the mind of the colonized.”

Senghor personified the contradictions of independence. A formidable intellect, he led his nation into the Yaounde agreement, was the foremost proponent of negritude and ruled for two decades before retiring on New Year’s Eve 1980, the first African president to leave office voluntarily. He then promptly left for France, where he had been a citizen since 1932.

As Andrew WM Smith and Chris Jeppesen note in their introduction to the book Britain, France and the Decolonization of Africa, “Colonial authority never rested on juridical control alone. Its perpetuation depended upon complex systems of knowledge and power that facilitated the physical, racial, economic and linguistic subordination of colonial peoples.” As long as it was built on the same systems and logic, “independence” was never going to undo it.

True decolonisation requires more than just the physical absence of the coloniser. It means deconstructing the frameworks that have been used to define the African’s place for him. That is the work that remains to be done.