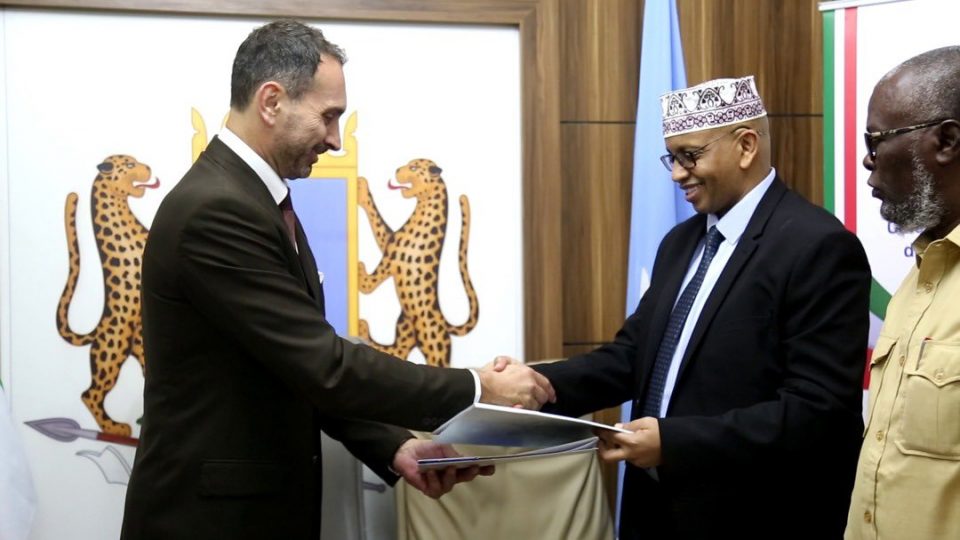 Is Somalia ready for news to be broadcast in Italian again?

Faisal Ali
After an agreement with the Italian government, Somalia’s state radio station will resume Italian broadcasts. But a lot of Somalis are unimpressed by the decision to reintroduce the language of its former colonial power on national radio.

On 6 October, Somalia’s information minister Osman Dubbe revealed an agreement with Italy that would resume an Italian language broadcast on the states’ radio station, Radio Mogadishu, for the first time in thirty years.

The move came as a surprise to many but Italy has long played an important role in Somalia’s post-conflict state-building and has recently intensified its diplomacy through humanitarian efforts, scholarships, encouraging trade and more recently promoting its language.

In mid-September, an agreement was reached between the Italian government and the Somali National University to begin Italian language courses. Learning “a new language”, the Italian embassy said, “means opening your mind” to “seize unexpected opportunities.”

“Almost everyone who had a place in Somali culture, music and news grew up listening to it, or made their careers because of it”

And earlier in the summer, Italy contributed $2 million to Somalia’s Productive Sectors Development Programme (PSDP), which aims to promote good governance and job creation in Somalia.

Having reopened its embassy in Mogadishu in 2014, Italian officials regularly meet their Somali counterparts, with both countries signing a memorandum of cooperation in late 2020.

During a trip to Italy in November 2018, President Mohamed Abdullahi Farmajo described ties between the countries as “historic”, with Somalia even sending a team of its doctors to support Italy when it was struggling with Covid-19 in the pandemic’s early days.

But despite Italy’s overtures, its colonial legacy and role in the collapse of the Somali state have cast a frosty shadow over its current efforts. As late as the 1990s, with only a hint of exaggeration, one progressive Italian senator dramatically declared that “Italy is definitely responsible” for Somalia’s descent into civil war.

Italian Somaliland was among Italy’s few African colonial possessions (along with Libya and Eritrea) and as a result, the Italian language gained currency in the Horn of Africa. It was in that context that Radio Mogadishu was founded in 1951 broadcasting in both Somali and Italian.

But despite its murky origin story, as Somalia’s first post-independence state broadcaster and for decades the only one, it emerged as a permanent fixture and a big part of life in post-colonial Somalia with its regular broadcasts and rich programs.

“It has got a strong place in both Somali cultural memory and Somali colonial memory,” Mohammed Haji Ingiriis, a Somali historian and Research Fellow on the Conflict Research Programme at LSE, told The New Arab.

Always under the influence of the government of the day, after independence it became the primary conduit to obtain news for many Somalis. As radio became more widespread during and after the 1950s, people would regularly gather in cafes and at home to listen to the morning, midday or evening round-up of global and regional affairs.

It was also a factory for talent providing a platform for some of Somalia’s most celebrated journalists, poets, singers and producers to hone their skills. “Almost everyone who had a place in Somali culture, music and news grew up listening to it, or made their careers because of it,” one Somali journalist told The New Arab.

Dubbed the “Voice of the Somali Republic” it has always been a fateful witness of the differing political currents that have flowed through the country.

Following Somalia’s independence in the 1960s, its first shift was swift and bold, as the station began broadcasting Somali nationalist and irredentist music and poetry challenging the borders which the early Somali Republic had inherited.

Given the closeness of the station to the information ministry, Kenya protested its inflammatory broadcasts for inciting unrest in its Somali populated Northern Frontier District during a visit by Somalia’s foreign minister to Nairobi in 1963. The day after it daringly played another song that raised the stakes further: “Oh Somalis, our problems are unsolved. We shall not regain, without going to war.”

Those broadcasts were eventually toned down and were replaced with music and poems about love until the 1969 coup that brought Siad Barre’s socialist military regime to power. During the coup, the station’s building was one of the first to be captured by the rogue officers, and before long it was playing martial music & eulogising the virtues of the Somali soldier, “The refuter of (clan) genealogies, who knows no nepotism.”

During the Barre regime, Radio Mogadishu developed a more stridently revolutionary and anti-colonialist posture mobilising the Somali population behind the military with a mixture of socialist and Somali nationalist programming and music. When it wasn’t celebrating the 1969 revolution you’d find talk shows, children’s shows, musical contests and commentaries on the Quran.

It was during this era that the use of Italian declined on the station as well as society more widely, says Mohammed Haji Ingiriis.

“The Italian language lost its visibility over the last 30 years, as the English language became dominant in all Somali circles”

Following the nationalisation of the Somali language, Italian broadcasts were reduced to 45 minutes a day with services in other regional languages also becoming available. But when the Somali state imploded, patterns of migration that favoured Arabic and English-speaking countries as well as the uncontested emergence of English as a global lingua franca, meant Italian quietly gave way to English.

“The Italian language lost its visibility over the last 30 years, as the English language became dominant in all Somali circles,” Ingiriis continued.

The station was shortly then taken over by the infamous General Mohammed Farah Aideed giving him an important tool through which he broadcast his propaganda during those uncertain years before it eventually closed down.

Radio Mogadishu was reopened in the early 2000s by the transitional government of Abdiqasim Salad Hassan but at its peak in the 1970s and 1980s it was broadcasting across the Horn of Africa and to the Middle East in Arabic, Amharic, Oromo and Kiswahili, in addition to its founding languages, Somali and Italian.

Though the station has firm competition today, it has found ways to keep with the times, launching its own website and a social media presence that offers news in English, Somali, and Arabic (Somalia’s other official language). But the decision to re-introduce Italian broadcasts has triggered colonial-era anxieties in some Somalis, and has been greeted with stern rebuke.

Abdirashid Hashi, a former government minister wrote “a lot of things have changed since then, including our independence.” Hodan Ali, a prominent Somali activist and healthcare worker said the “Italian colonial legacy is a major part of our current dysfunction.” Omar Jimale, a lecturer with Simad and Mogadishu University complained that Italian is no longer an international language.

“The old generation who spoke Italian have passed away or have left the country so broadcasting a language not followed on the ground is a waste of resources,” Dahir told The New Arab. “Make no mistake, I am not against learning new languages but what opportunities does Italian offer to young Somalis facing stiff competition in the face of growing globalisation?”

Simone Brioni, an Assistant Professor at Stony Brook University and an expert on colonial era and post-colonial Italian literature written by Somali authors, says the direction of cultural influence in this case doesn’t appreciate the historical context.

“I think this is what has generated a strong response because Italian was imposed on Somalis. So ‘restoration’, speaking of it as if it was something there normally, doesn’t take into account the uneven relationship of power developed during colonialism,” Brioni told The New Arab.

It’s noteworthy that Radio Mogadishu and the Somali National University, two of the institutions which were created during the colonial era and where the presence of Italian was most salient, are the institutions Italy has targeted to spread its language today.

However, it’s not just about the optics or choice words, Brioni continues, but the missed opportunity to explore that legacy in a more constructive and interesting way whilst avoiding the reproduction of colonial-era hierarchies.

“Many fantastic Somali writers have used the Italian language to voice their objections to colonialism as well as the possibility of opening archival material. Learning Italian could provide that access.

“But the direction of cultural influence here is one way and quite top-down, lacking any attempt to reciprocate or collaborate,” Brioni says.

Learning Italian might make sense for aspiring Somali academics who want to explore that history, says Dahir, echoing Brioni’s thoughts, but the reintroduction of Italian this way shows that Italy hasn’t reconciled itself with how Somalis view its history in Somalia.

“This decision of imposing the Italian language (through conditional aid) on Somalia could well be considered a new form of cultural imperialism,” Dahir says. “I believe it is time Italy came to terms with its colonial past in Somalia.”

Faisal Ali is an Istanbul based multimedia journalist. He writes about East African politics.

First posted at The New Arab