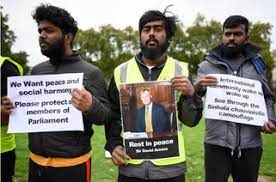 BRITAIN’S SOMALI community are being advised to be extra vigilant following the killing of MP Sir David Amess.

Many British Somali’s fear they will be targeted after it was reported that the 25-year-old man arrested on suspicion of murder, Ali Harbi Ali, was a British citizen of Somali heritage.

Leading Somali community organisations have said they are addressing concerns and are issuing warnings to visitors about the possibility of increased racist attacks.

Speaking to The Voice, Hassan Jama, the chairman of the Somali Youth Union in the UK, said: “We have informed our visitors and those in our community to be extra vigilant because anything can happen and we have contacted our local Mosques and told them to be careful.”

The Somali Youth Union in the UK provides training and skills to young and adult Somali people and also assists members of the wider community.

Mr Jama said there is no excuse for violence and strongly condemned the murder of the Conservative MP.

He criticised some of the reporting by mainstream media outlets and said it has left the Somali community open to reprisal attacks.

He said: “We as the Somali community are not who the killer is. Because one person commits a crime that doesn’t mean all Somali’s are criminals.

“Somali’s are not terrorists and one isolated incident cannot be blamed on the wider community.

“For us, we are both Muslim and black and we have two negative names on our shoulder according to the media.

“If a white person commits a murder, the media speculates the mental wellbeing of that person, for a black or Muslim person we are not given the same treatment.”

“The actions of one man is not to be blamed on an entire community,” he added.

Twitter and other online social media spaces quickly became flooded with race hate after the suspects’ background, and then his name, were revealed.

Sabby Dhalu, an organiser at Stand up to Racism, added: “I think that we are seeing irresponsible terminology by the press like ‘Islam is terrorism’ being used. That sort of language feels like Islamophobia.”

The Somali Youth Union, along with several other key Somali organisations and community leaders, issued a joint statement last week, where they sent their deepest sympathy and condolences to the family of Sir David.

Mr Jama added: “We are deeply sorry about the killing of the MP, he was a hardworking man, who was a family man and supported many people in and out of his constituency.

“We as a Somali community would like to send our condolences to his family.”

Mr Jama said he hopes those in the wider community will stand up against any increased hostility and racism the British Somali community may face in the coming weeks and months.

The suspect, Ali, is being held under the Terrorism Act and officers have until Friday to charge him.

Sir David was stabbed multiple times on Friday at a meeting with his constituents at Belfairs Methodist Church in Essex.

He had been a Conservative MP in Essex since 1983.