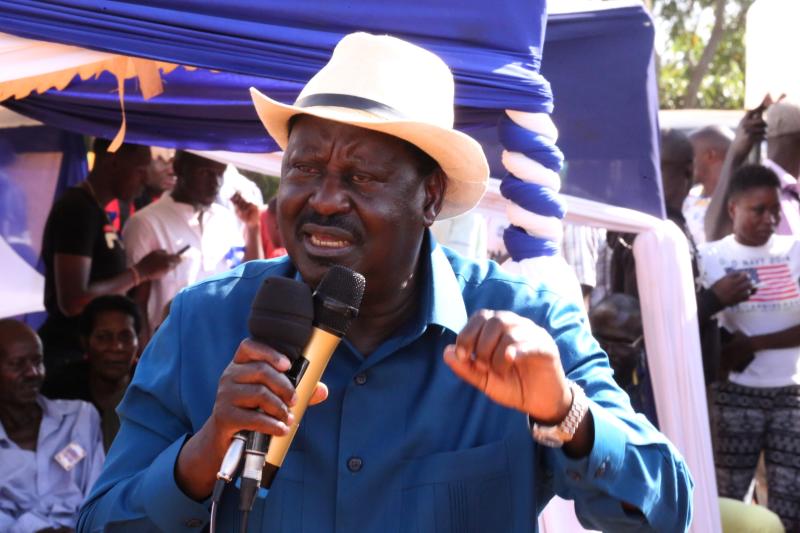 ODM leader Raila Odinga has said that he has no problem with Canadian-based lawyer Miguna Miguna coming back to Kenya.

Speaking during the Building Bridges Initiative (BBI) consultative meeting at the Gusii Stadium in Kisii County today, Raila said that the lawyer was a small person who was not a threat to anybody. He was responding to a section of the crowd who asked him to address Miguna’s travel woes. Raila said that neither he nor President Uhuru Kenyatta was preventing Miguna from coming back to Kenya after Lufthansa Airlines declined to jet the lawyer into Kenya.

Miguna has been in Germany since Tuesday. “The Miguna matter is a small issue that does not require the President or me to handle. Interior Cabinet Secretary Fred Matiang’i will handle that matter so that he can be back to the country and continue doing what he thinks is right,” said Raila. The ODM leader said that Miguna has been barking and abusing Kenyan leaders but nobody was bothered since he did not have any impact on the country’s politics.

He added that his return would not change the situation. Raila, who spoke in the presence of Matiang’i, said that Kenya was a free country and that nobody was ready to give Miguna unnecessary mileage, maintaining that he would be back in the country as long as he abides by international travelling requirements.

Miguna has declined the government’s offer to visit a Kenyan embassy across the world to get a passport, saying it will be risking his life. “I am not taking the advice by Government Spokesman Cyrus Oguna to visit any Kenyan embassy anywhere since it might be a trap to eliminate me remembering what happened to Saudi Arabia Journalist Mohammed Khashoggi who was killed,” Miguna said on Wednesday.