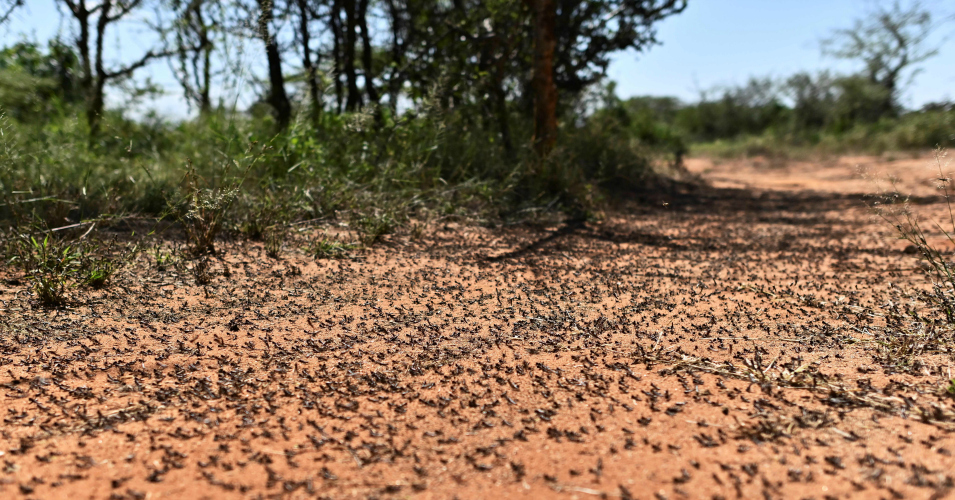 Huge swarms on scales that had not been seen in decades were reported last year in East Africa, parts of the Arabian Peninsula, Iran, Iraq, Pakistan and India.

——————————————————————————————————————————————————————————
JANUARY 25, 2021 05:35
A second wave of desert locust swarms has begun striking an already hard-hit East Africa in recent weeks after heavy rains and a late-season cyclone sparked a new round of breeding, with swarms invading Kenya and southern Ethiopia, according to the Food and Agriculture Organization (FAO) of the United Nations.
The first wave of locusts was reported in East Africa in January of last year, when heavy rains sparked a round of largescale breeding, according to FAO.
Weather conditions remained favorable for locust reproduction and growth throughout the year, feeding outbreaks of locust from East Africa to Iran.
With the region threatened by a second wave of locusts, local countries are on “much better footing” than they were at the beginning of 2020, according to FAO, which stressed that the countries are better prepared and equipped and that the number of desert locusts is much smaller than it was in 2020.
“The last time Africa saw an upsurge of locusts approaching this scale, in the Sahel, it took two years and more than $500 million to bring under control. This upsurge was even bigger, but East Africa is poised to end it — provided governments can keep those aircraft flying,” said FAO Deputy Director-General Laurent Thomas. “The locust fighting machine that has been assembled in East Africa is now fully equipped and able to contain, suppress and we believe, eventually end this record-breaking upsurge.”
Dominique Burgeon, FAO’s director of emergencies and resilience stated that over three million tonnes of cereals, valued at approximately $940 million, were protected due to surveillance and response efforts last year, according to the UN. That’s enough to feed 21 million people for a year.
Despite the optimism, Thomas stressed that the region needed $38.8 million in additional funding in order to continue fighting the outbreaks through June.
FAO expects that a new generation of locust will emerge in early April amid seasonal rains and the planting season in Kenya and southern Ethiopia. Desert locusts have also been reported breeding on Somalia’s coastline on the Gulf of Aden.
An FAO Desert Locust Bulletin from the end of December forecast that swarms would spread throughout southern Ethiopia, Kenya and the coast of Saudi Arabia and limited breeding would occur in Sudan, Eritrea, Egypt and Yemen. Concerning Israel, Jordan, Lebanon and Syria, the forecast stated that “no significant developments are likely.”
The Famine Early Warning System stated that several parts of the Horn of Africa are facing food crises caused partially by the locust swarms and that the crises will worsen in the coming months, especially in Ethiopia, Sudan and Yemen, according to NPR.
All of this comes as the coronavirus pandemic continues to impact the world’s economy and food availability for many people.
Huge swarms on scales that had not been seen in decades were reported last year in East Africa, parts of the Arabian Peninsula, Iran, Iraq, Pakistan and India, with some swarms reaching as wide as 60 kilometers and covering as much as 240,000 hectares of land, an area the size of Luxembourg, according to FAO.
A one sq. km. swarm of locusts can eat the same amount of food in one day as 35,000 people, according to the FAO. UN Food & Agriculture Organization locust forecasting expert Keith Cressman explained that a locust swarm that enters a field in the morning can eat the entire field by midday. The insects can travel up to 93 miles a day.
Via Jerusalem Post
previous post