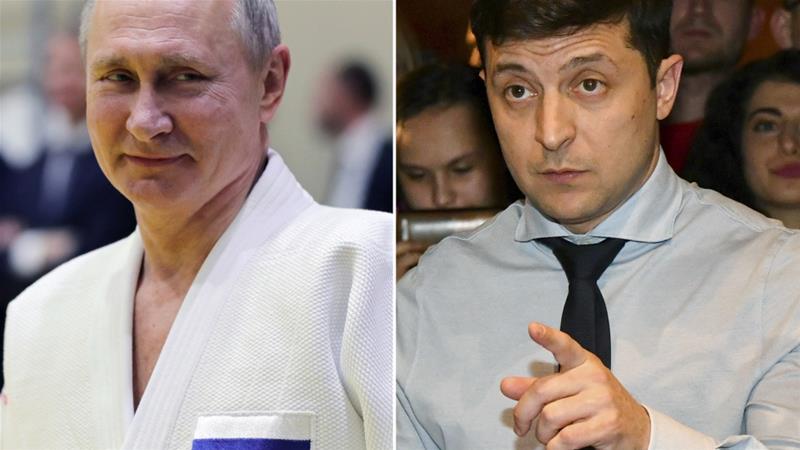 No comprehensive peace deal is expected but diplomats hope meeting will help boost trust between leaders.

Russian President Vladimir Putin will for the first time hold formal talks with his Ukrainian counterpart, Volodymyr Zelenskyy over the conflict in Ukraine‘s east on Monday in a much-anticipated summit in the French capital, Paris.

No comprehensive peace deal is expected from the afternoon meeting – mediated by French President Emmanuel Macron and German Chancellor Angela Merkel – but diplomats hope the exercise will help boost trust between the two men.

Thousands have been killed and one million fled their homes since pro-Russia militias in eastern Ukraine launched a bid for independence in 2014 – kicking off a conflict that deepened Russia’s estrangement from the West.

The separatists seized control of the Donetsk and Luhansk regions shortly after Russia’s annexation of Crimea, a Ukrainian peninsula.

Diplomats have emphasised the issue of Crimea – a seizure that gave Putin a popularity boost domestically but led to international sanctions being imposed – is not on the table at the summit.

Kyiv has made clear its determination to never give up the peninsula, which the international community still regards as part of Ukraine.

The Kremlin has sent signals it is ready to work with Zelenskyy, who Putin has described as “likeable” and “sincere”.

But the Russian president also will not want to return empty-handed and will be pushing for an easing of sanctions.

German Foreign Minister Heiko Maas told the Funke newspaper group ahead of the summit “we have to do everything we can … to make progress in the Ukrainian peace process”, and described the conflict as “a festering wound in Europe”.

Maas praised Zelenskyy for bringing “new momentum” to the talks, adding “to make progress with the next difficult steps, Russia needs to make a move too”.

The goals of Monday’s meeting include agreeing to disband illegal militias, the departure of foreign fighters from Donetsk and Luhansk, and Ukraine taking back control over its border with Russia, according to a French presidential source.

“There remains the problem of trust between the parties. This needs to be created before we can move forward,” said the source, who asked not to be named.

Also key is agreeing on a calendar for elections to be held in Donetsk and Luhansk under Ukrainian law with the two regions enjoying special status – an idea known as the Steinmeier Formula.

Monday’s meeting is the first such summit in three years and seeks to implement accords signed in Minsk in 2015 that called for the withdrawal of heavy weapons, the restoration of Kyiv’s control over its borders, wider autonomy, and the holding of local elections.

The French presidential source said it was not just Putin’s strategic calculations that had impeded the implementation of the Minsk accords but also the “difficulties in Ukraine because of public opinion, divisions, and the fundamental wound caused by the war”.

The summit is a hugely delicate event for everyone involved, but particularly for Zelenskyy, who is under pressure not to cede ground to the Kremlin.

For Macron, the summit is a centrepiece of an increasingly bold foreign policy he is driving despite troubles at home, where transport workers have been on strike for days in a dispute over pension reforms.

Macron, who shocked NATO allies this year by declaring the military alliance “brain dead”, has made clear his belief that Europe needs a strategic partnership with Russia.

Prof. Githu Muigai: ‘I Pulled Myself Up By My Bootstraps’