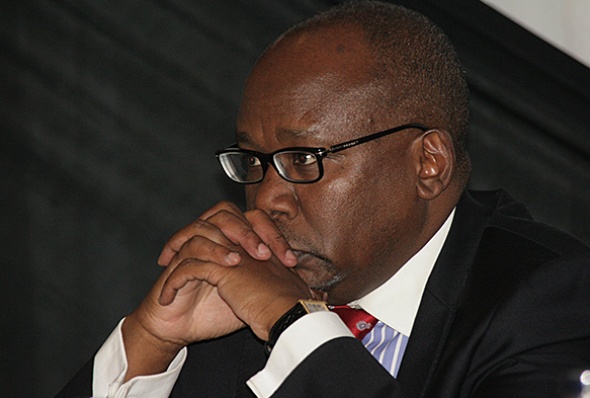 There is Prof. Githu Muigai swallowed by the leather Chesterfield sofas of the Hemingway Bar, sipping tea. It is hard to imagine that not too long ago, he was the Attorney-General, the principal legal advisor to the Government of Kenya. He is wearing a checkered newsboy hat, corduroy trousers and a black coat with red patches on the elbow, as professorial as one can get.

He is now fully in academia at the University of Nairobi’s School of Law, amongst other engagements that now fill his time. Away from the whirlwind that was his former office, he is now happy and relaxed as he tells JACKSON BIKO.

If your life was a farm with the seasons of tilling, planting, harvesting, what season are you in right now?

(Laughs). Interesting. (Pause). I’m harvesting. By which I mean I have invested in education and time, now I feel like I have reached where I am able to rely on that experience to enjoy professional work at its highest. I feel that I am now able to give an opinion and be listened to.

Who have you ever met who greatly challenged or intimidated your intelligence?

Barack Obama. That’s not cliché. (Laughs). I first met Obama when I first went to Columbia for my postgraduate while he was at Harvard in the early 80s. He had been elected to be Editor-in-Chief of the Harvard Law Review and his story was run in the New York Times. In the 100 years of the Harvard Law Review, there had never been a black editor. Quite frankly I don’t think he gets enough credit, he’s such a towering intellectual and I found him intimidating and special.

What do you think makes you special?

I’m tenacious. I had very little to work with. My father died when I was nine years old and my mother was left to raise seven children as a seamstress. She ran a small tailoring shop in Kiambu town. We were very much part of a community like in old Kiambu town. Virtually, everybody knew everybody. We went to the same school, church, our town was two streets. (Laughs). You knew the butcher, the baker, the tailor. It was not a place of great means, but it was a nice and loving environment.

How do you think growing fatherless so early eventually impacted on your life as an adult?

Luckily for me, I grew up with many other father figures. I think it helped me to appreciate what a father’s presence means and I hope I have been a good father to my children. Obviously, without him, our socioeconomic life was affected adversely. I spent a lifetime wondering how life would have been if he hadn’t passed on then. But I am convinced that my mother’s energies far superseded what my father could have done. My mother was a true mother hen.

What have you ever failed spectacularly at, a monkey that won’t leave your back?

Unlike my mother, I’m not a good businessperson. A couple of times I engaged in business ventures where I lost my shirt. Maybe the only reason that I have a law firm that functions is because of my business partner, Mohamed Nyaoga. He is a real born-with-it businessman.

I have also failed in politics, I wasn’t able to connect with the political process in my generation. It was my failure to probably cultivate the common touch that allows you to go down to the village and look them in the eye and tell them an untruth. It is not a self-righteous stand. It is just to say, I think there is a people skill that you need to be a successful politician and part of it involves getting to the roots, staying there and selling hope. I’m never able to sell hope if I don’t feel hopeful myself.

What did you learn about yourself over the seven of so years you were the Attorney-General?

That patience is a virtue. I learnt that the ship of State is not a speed boat, it’s an aircraft carrier. It takes a long time to turn and you must have the patience to wait for it.

Secondly, I learnt that if you are a manager, it’s all about the team. Lastly, I learnt that in public service, what we call politics, there are no permanent friends and there are no permanent enemies. You would be shocked. The people with whom a month ago you couldn’t see eye-to-eye, you’ll discover the following month they are the only people who can help you move the agenda. (Laughs).

Once you start seeing things that way, then you never have extreme views or violent language because, I like to say, there are words you can call a man which he will never forget even in the day you sue for peace. So always speak softly, wear a broad smile and walk gently then carry a huge stick.

Can a gentleman make a good politician?

(Pause). No. The default mode, the bottom line of politics, is self-interest. There are good men in politics but there are no gentlemen in politics.

Were you a gentleman?

What did you learn about power over that period you were the AG?

I learnt that the Bible was right all along; all of it is vanity. (Laughs). At the end of the day, I used to say when I was younger, “In the fullness of time, everything settles back.”

Power is an illusion because at the end of the day when the music stops, when the curtains fall, you have to go home and be yourself; a father, a husband, a brother, a villager coming to bury the dead with the other villagers.

Unless one is a hereditary monarch waiting to pass away in the palace, at the end of the day everybody must step away.

Unfortunately, for the majority of us who have the privilege to work in a public office, the ultra-ego becomes an obsession so that the chase cars and the saluting, aides rushing around with the bags become an end in itself. And even when you are no longer happy, you don’t know any other life. You crave it like a junkie because you have forgotten any other life.

Did it ever go to your head?

I think that’s where I was more successful than most. I kept it completely out.

How did the office change you?

(Sighs). I didn’t know that there would be grave, life and death decisions and that they were my call. I can tell you it is very hard when that happens for you to have a good night’s sleep forever.

Secondly, I was quite surprised by how different the reality is regarding the camaraderie among the senior leadership much, much better than the public thinks. So, while the public thinks that there is a fight everyday, even when it is very tense, among the top, they call each other, they see each other, they drink and have lunches together and so on. Nothing prepared me for the office.

From where do you draw your greatest stimulation?

(Sighs). I don’t want to sound pompous and self-righteous, but I do like very much intellectual debates. I like the banter that goes with ideas, you’re not trying to convert me, I’m not trying to convert you but the sheer delight of having that discussion: art, literature, music, dance, just the things that humanity has created that so fascinate.

You know what I think is the greatest genius art form? Comedy. I enjoy all that. I’m afraid I don’t enjoy football.

If it were to end now, who’s the one person you’d like to apologise to?

(Pause) Maybe it would be the first generation of students that I taught. Because while holding myself out as a teacher of the law, I didn’t know enough myself. I should apologise for not having been able to teach them more, better and deeper.

This is an ugly, almost pornographic question; did you find any financial success in public service?

(Pause). I was probably, if we were to believe the Business Daily, I was the highest paid civil servant.

Partly because I transited from the old Constitution to the new one and I was paid from the consolidated fund. I was very well paid for a lawyer of my seniority. I enjoyed the perks of office, getting grants and so on, but I would not say that I became a man of means.

I continued to file my assets and liabilities forms. Public service would not be a place where you enrich unless you’re really trading with the government and that can only take a few months before it becomes public knowledge that you are the one supplying cement or what or what.

How much do you think money is tied to happiness?

Can an intellectual survive in politics?

What are you struggling with at 59?

Now, it’s to remain active professionally and relevant without feeling that I have to be a busybody trying to be in everything that is happening. I spend time mentoring academics, I enjoy that. I give the occasional lectures, I enjoy that. I sit in a number of boards, not too many, I enjoy that. As an arbitrator, I listen to disputes and I enjoy that. Every so often I am briefed to appear in the Supreme Court or Court of Appeal, I enjoy that. So, I’m trying to go into the sunset, not with a bang, but gently riding to the sunset.

I have had the great fortune to live the Kenyan dream, pulling myself up by my bootstraps. I have gone so far with so little. For a man who was born in Pumwani Hospital, where if you check the statistics I assume every 10 children, who were born, several didn’t make it to their fifth birthday. So, I have been extremely happy. I’m a seven.

Is there anything that you thought I’d ask that I didn’t ask, Prof?

I thought you would ask me, if I would ever go back to public service.