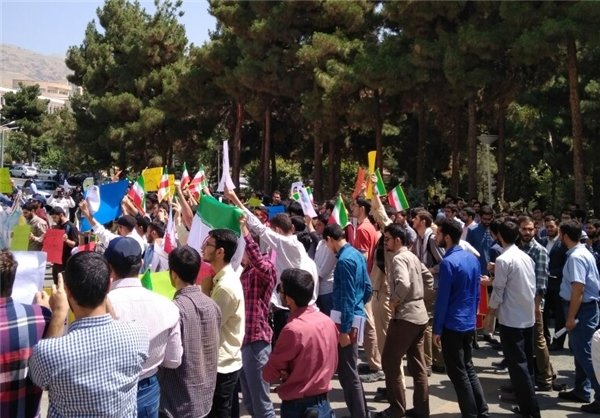 Iranians students chant slogans as they demonstrate following a tribute for the victims of Ukraine International Airlines Boeing 737 in front of the Amirkabir University in the capital Tehran, on January 11,

DUBAI: Iran’s statement on Saturday that a Ukrainian passenger plane was downed by a missile fired unintentionally followed growing pressure from abroad but also at home, and for some Iranians, the authorities’ expressions of condolence were not enough.
For days, Iran had denied Western accusations it was responsible for Wednesday’s crash soon after takeoff from Tehran. Authorities said on Saturday that air defenses had been fired in error while on high alert following Iranian missile strikes on US targets in Iraq.
Expressions of condolence over the incident from supreme leader and President Hassan Rouhani failed to calm angry Iranians, who used social media to express their outrage against the establishment for concealing the truth.
“It is a national tragedy. The way it was handled and it was announced by the authorities was even more tragic,” said Ali Ansari, a moderate cleric, according to Iran’s semi-official ILNA news agency.
Many Iranians asked why authorities did not close down Tehran’s airport and the country’s airspace at a time when they would have been on alert for retaliation after the missile strikes.
There were no fatalities in those strikes, launched to avenge the Jan. 3 US killing of top Iranian commander Qassem Soleimani in a drone strike in Baghdad.
“They were so careful not to kill any American in their revenge for Soleimani. But they did not close the airport? This shows how much this regime cares for Iranians,” said Mira Sedaghati in Tehran by telephone.
An Iranian military statement carried by state media said the Ukrainian plane, which was headed for Kiev, was mistaken for a “hostile target” after it turned toward a sensitive military base of the elite Revolutionary Guards near Tehran, adding that it was a “human error and unintentional.”
“Unintentionally? What does it mean? They concealed this huge tragic news for days just to mourn for Soleimani. Shame on you,” said Reza Ghadyani, in Tabriz city.

Unintentionally? What does it mean? They concealed this huge tragic news for days just to mourn for Soleimani. Shame on you.

The country held three days of funeral processions for Soleimani, who was head of the Revolutionary Guards’ overseas Quds Force and a national hero. Hundreds of thousands of people participated across the country.
Some Iranians called for resignation of officials, dismissing their apologies.
“You took your revenge from Iranians,” tweeted Ahmad Batebi on his @radiojibi Twitter account, in response to Rouhani’s tweet saying that “The Islamic Republic of Iran deeply regrets this disastrous mistake.”
“Only resignation,” tweeted Sadeq on his @sadeq1367 account
In a Twitter message on Saturday, Foreign Minister Mohammad Javad Zarif cast some of the blame for the plane disaster on what he called US adventurism.
“It’s the end line Mr. Minister! You ruined everything!,” responded Bita Razaqi on @bitarazaqi.