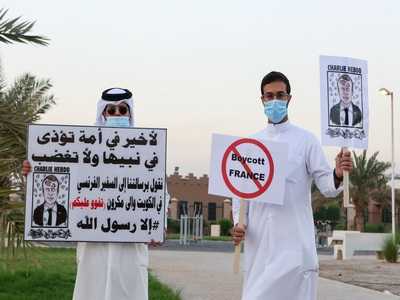 Macron’s comments to not “give up cartoons” came in response to the beheading of a teacher, Samuel Paty, outside his school in a suburb outside Paris earlier this month

Calls to boycott French goods are growing in the Arab world and beyond, after President Emmanuel Macron criticised Islamists and vowed not to “give up cartoons” depicting the Prophet Mohammed.

Macron’s comments, on Wednesday, came in response to the beheading of a teacher, Samuel Paty, outside his school in a suburb outside Paris earlier this month, after he had shown cartoons of the Prophet Mohammed during a class he was leading on free speech.

The teacher became the target of an online hate campaign over his choice of lesson material — the same images that unleashed a bloody assault by Islamist gunmen on the offices of satirical magazine Charlie Hebdo, the original publisher, in January 2015.

Caricatures of Mohammed are forbidden by Islam.

On Saturday, Jordan’s foreign ministry said it condemned the “continued publication of caricatures of the Prophet Mohammed under the pretext of freedom of expression” and any “discriminatory and misleading attempts that seek to link Islam with terrorism.”

It did not directly criticise Macron, although the French president had on Wednesday also contended that Paty was “killed because Islamists want our future”.

But Jordan’s opposition Islamic Action Front party called on the French president to apologise for his comments and urged citizens in the kingdom to boycott French goods.

Such boycotts are already underway in Kuwait and Qatar.

In Doha, an AFP correspondent saw workers stripping shelves of French-made St. Dalfour jams and Saf-Instant yeast in a branch of the Al Meera supermarket chain on Saturday.

They stopped short of explicitly naming Macron or citing his comments, but the Al Meera statement said customer “comments guided our actions”.

Recep Tayyip Erdogan — the president of Turkey and a major ally of Qatar — on Saturday slammed Macron over his policies toward Muslims, saying that the French president needed “mental checks.”

“What can one say about a head of state who treats millions of members from different faith groups this way: first of all, have mental checks,” Erdogan said in a televised address.

Before Macron’s comments on Wednesday, he had already sparked a backlash in early October when he said “Islam is a religion that is in crisis all over the world”.

Nayef Falah Mubarak Al-Hajraf, secretary general of the Gulf Cooperation Council called Macron’s words “irresponsible” on Friday, and said they would “increase the spread of a culture of hatred”.

The same day, Qatar University wrote on Twitter that following “the deliberate abuse of Islam and its symbols”, French Cultural Week would be postponed indefinitely, in a context where 2020 is the France-Qatar year of culture.

Many Jordanians have changed their profiles on Facebook to add the message “Respect Mohammad the Prophet of Allah (God)”.

In Jaffa, a largely Arab town next to Tel Aviv, some 200 people protested after evening prayers on Saturday in front of the residence of France’s ambassador to Israel.